Wetiko: The Virus of Egoism and Selfishness According to Native Americans 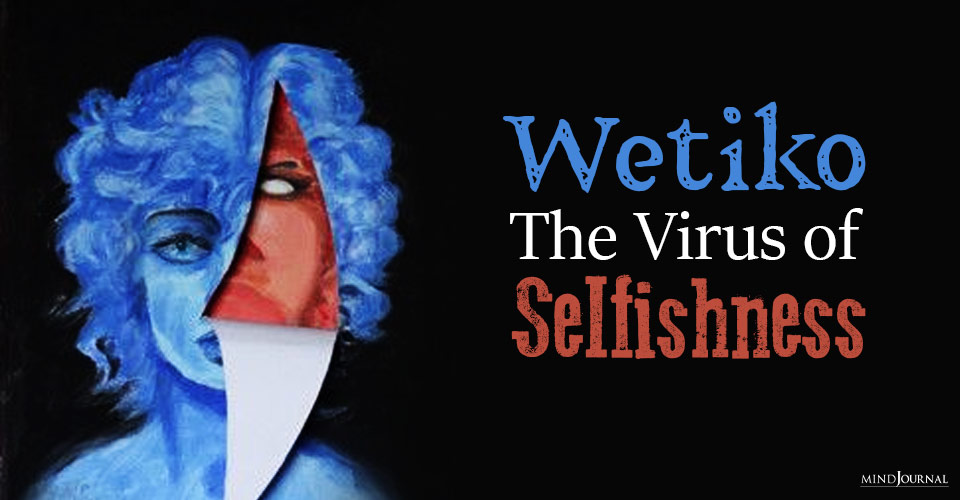 Did you know that according to the Native Americans, humans tend to be infected by a virus called “Wetiko” or the “virus of selfishness”? Seems absurd right? But is being infected by a selfishness virus really that improbable?

Native Americans believe selfishness is a virus that can affect us. They believe it to be a pathogen that forces the victim to feed their incessant need to be selfish, ultimately causing humanity to become its own enemy.

This view is supported in the book called “Dispelling Wetiko” by Carl Jung. He wrote this literary piece to explain the concept of humans getting infected by wetiko. He pointed out that we live in an era where psychosocial phenomena prove the existence of a “virus” of selfishness.

“Wetiko” is a term used by Native Americans to designate an evil person who doesn’t care about the well-being of others or a person who engages in selfish acts despite the cost. The book “Dispelling Wetiko” is not negative or reproachful.

It has merely explained how every virus tends to seek a host to invade and feed off but the immunity system or defensive barriers that we all have might protect us from becoming its prey. It is possible to strengthen our “psychological immune system” to keep ourselves protected from the selfishness virus as well.

How The Wetiko Virus Came Into Being?

Jack Forbes, a historian explained an interesting aspect of human selfishness in his book “Columbus and Other Cannibals“. When indigenous communities came into contact with European pilgrims, the Native Americans pointed out that they were infected by Wetiko.

Indigenous mythologies believe that indulgent self-destructive habits are inspired by the wetiko. The tribe of the Cree of Canada first used this concept. It was also found that Ojibwa, a tribe, was already using this concept with the well-known term “wendigo”.

They had an odd notion that the white or the “civilized” man is an individual affected by the “virus” or “selfishness”. The virus drives them towards greediness and being selfish towards others. Paul Levy, a journalist and author explains that this idea is the same one Carl Jung used to explain the concept of Shadow.

Shadow is defined by the archetype of the unconscious that we all share. Thus general emotions like jealousy, greed, thirst for power, or selfishness are products of our collective unconscious. Under the influence of this dark shadow, humans get carried away and commit awful acts.

The Native Americans also believed that wetiko wasn’t something that came from the external world, hell-bent on possessing us. It resides within ourselves. We carry the shadow of selfishness within, but it is up to us whether we let it feed on us.

Wetiko is believed to be a psychic form of blindness. Psychiatrist Carl Jung refers to wetiko by the name Antimimos that is described as the “imitator and evil principle”. Antimimos is a kind of deception that can be thought of as counter mimicry.

It is an evil force that attempts to lead humans astray. It transforms truth into falsehood and falsehood to the truth, which ultimately leads us to forget the authentic way of living. It is believed that potentially anyone can fall into the shadow and unwillingly become an instrument of the virus that tries to act its will through us.

The Wetiko is often portrayed as a shapeshifter like a werewolf, that can appear disguised as a good spirit. In the indigenous legends, the wetiko eats another person’s soul and grows larger in proportion with every meal it feeds on. Such a person will have an insatiable hunger for power, dominance, and control.

It is almost as if a psychic tapeworm has taken over their brains and tricked them into doing heinous acts out of egoism and selfishness, believing that whatever they are doing is only empowering them. But in reality, they are only the carrier, a means to the end of the downfall of humanity.

It is seen as the autoimmune disease of the psyche. Just as in autoimmune deficiency syndrome, the immune system tends to attack the life that it is trying to protect, the wetiko virus drives humans towards self-destruction. In an attempt to live, it ultimately tries to destroy its own life.

A classic example can be how humans are destroying the biosphere of the planet which is the very thing that life depends on. Wetiko is behind humans’ never-ending greed which ultimately sets them up for destruction.

Wetiko is believed to be a highly contagious psychological virus that spreads through the channel of shared consciousness. But the infection doesn’t travel with a physical pathogen. This bug tends to feed on our unconscious blind spots. The greatest danger that humanity is presented with is the possibility of millions falling prey to the unconscious together which ultimately will lead to self-destruction.

How To Cure The Wetiko Virus?

These demons have led mankind to do terrible things throughout history. The wetiko has governed people’s consciousness for centuries. We tend to give it power over us, obey it if we must, and get carried away by its whims and wishes. Carl Jung explained that it is the human’s responsibility to become aware of this process.