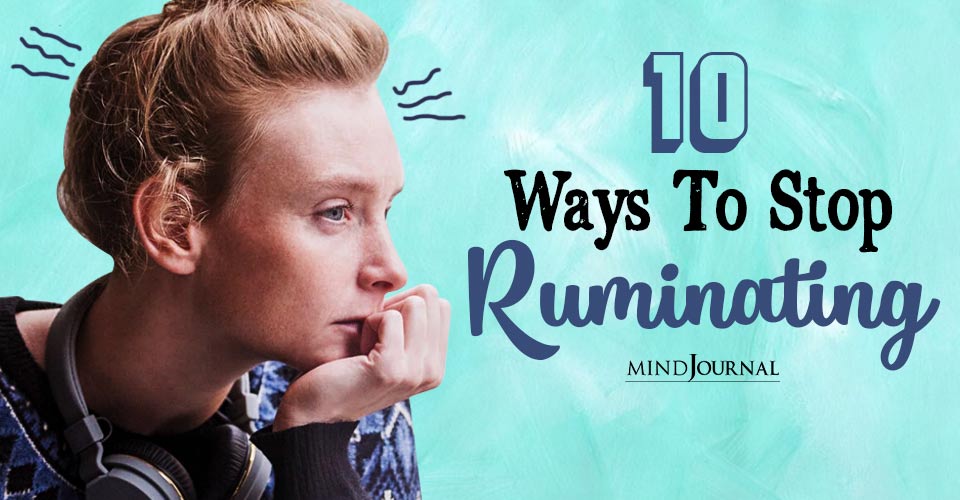 Rumination if not reigned in at the right time can wreak havoc on your mental and emotional health. That’s why it’s important to know when and how to stop ruminating, whenever things start to feel too overwhelming.

One of the most plaguing consequences of sibling estrangement is the thought pattern of rumination: rehashing the same thoughts, over and over, even when those thoughts breed sadness or negativity.

Many rejected siblings – and even some who chose to terminate the relationship — find themselves constantly mulling over, “What did I do? What was my role in the cutoff? Can I fix this?”

Related: The Ruminating Mind: 4 Steps To Deal With Negative Thoughts

Why do people ruminate?

“We are natural problem solvers,” explains Canadian psychotherapist Ali-John Chaudhary, who specializes in sibling estrangement. “The mind will seek out an answer or a sense of meaning in any experience. People assume that if they think through an issue, they’ll better understand it and resolve it.”

Some people ruminate as a result of previous trauma. Those prone to depression may get stuck in “loop” thinking, perpetuating a sense of blame and shame, worsening a negative mental state.

“In the worst cases,” Chaudhary says, “rumination can contribute to isolation. Dwelling on the negative, constantly discussing bitter thoughts with others, can drive people away.”

As one woman who is estranged from her sibling said, “Rumination can cripple people mentally and cause a lot of anxiety and self-gaslighting.”

Those who self-gaslight frequently internalize abuse to which they’ve been subjected, convincing themselves that their tormentor’s perceptions are accurate.

They’re unable to “turn off” doubt-inducing thoughts running insistently through their mind. “Maybe things weren’t so bad,” they may think. Or, “S/he didn’t really mean that.” Or, “Maybe I deserve to be treated like this.”

Even when a ruminating person recognizes that these thought patterns are self-destructive, they don’t know how to stop. Many feel they’re hostages of their own negative thoughts, yet they lack the tools to free themselves.

Here are some effective ways to derail rumination:

1. Find a way to distract yourself. Call a friend — and talk about anything but the thoughts troubling you. Exercise, tackle some chores, work on a puzzle, watch a movie, or spend time in nature.

Related: How Rigid Thinking And Rumination Undermines Your Health And Life

2. Make an action plan for doing what you can to address the problem. Determine what you can control, and write down your ideas to emphasize their importance.

3. Move forward by taking one of the actions you’ve identified.

4. Challenge your own thinking. Ask yourself if your troubling thoughts are accurate. The National Science Foundation reports that the average brain generates 15,000 to 50,000 thoughts daily. Most are negative, and up to 90 percent are repetitive.

These Automatic Negative Thoughts (ANTs) can cause chronic stress, even changing your brain chemistry by depleting “feel-good” neurotransmitters (serotonin and dopamine). Consciously replace ANTs with positive affirmations, even if you feel silly at first. Building positive habits is an important aspect of self-care.

5. Adjust your life goals, perhaps reducing expectations of yourself and others.

6. Enhance self-esteem by building upon existing strengths, or sample new activities to discover where you can excel. Poor self-esteem is closely associated with increased rumination.

7. Meditation can reduce rumination by promoting a calm emotional state and grounding you in the present moment. It also helps identify the connection between thoughts and feelings. When you catch yourself ruminating, sit down, breathe deeply, and focus just on your breathing.

8. Identify – and then avoid — your triggers. When you start ruminating, note where you are, the time of day, who’s around you, and what you’ve been doing. In today’s world, even watching the news or scrolling through social media may be triggers. A “diet” restricting news and social media can help.

Related: Ruminating: 8 Tricks That Can Help You Control Repetitive Thinking

9. Set a timer. Allow yourself to feel disturbing emotions for a set period. Then place a rubber band around your wrist. Each time you find yourself returning to negative thoughts, snap the rubber band. This will make you more aware of your repetitious thought patterns.

10. If rumination becomes too intense, you may want to work with a therapist to help identify the core issues that are fueling rumination.

As Buddha said, “Nothing can harm you as much as your own thoughts.” Those who ruminate know the deep truth of this statement — and the wisdom of acting on it.

Want to know more about how to stop ruminating thoughts? Check this video out below!