16 Signs You Are Dealing With An Evil Person 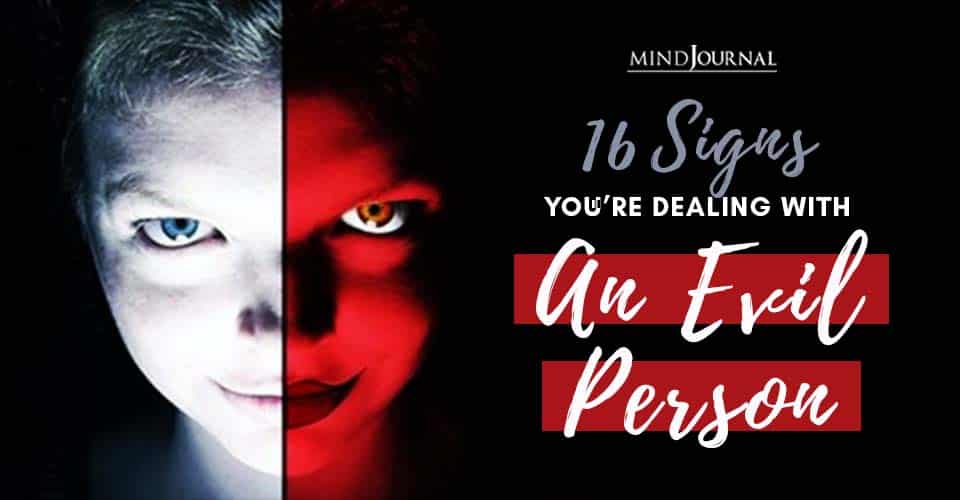 Have you ever dealt with or engaged with an evil person? Then you must be knowing how horrible they can make you feel about yourself, and everything else.

Evil can be defined, but it’s hard to pin down.

Simply put: an evil person is someone who engages in malevolent behaviors.

Some argue that they’re immoral, sick, depraved, or wicked, but those words are hard to define.

Immorality to one is normalcy to another.

But when you meet an evil person, no amount of questioning definitions will change your mind.

The truth is, you will know it when you see it.

Evil people come from all sorts of places, often ones you wouldn’t expect.

We find them at our schools, at our churches and places of worship, in the homes of our friends; everywhere we look.

There is only one solution for the evil people in our lives.

16 Signs You Are Dealing With An Evil Person

1. Enjoyment of Others Misfortune

The malevolent ways of evil people often leave them so twisted and turned around on the inside that they feel good when they see misfortunate.

It might be a disaster on the news or a dramatic situation in front of them.

They seem to delight in misfortune, to relish the bad feelings of other people.

All the times that an evil person has been hurt in their life falls away when bad things happen to other people.

The real danger here is that they could create bad situations for you and others in their life in order to be able to enjoy the misfortunate that they create.

It is important to recognize who they are before terrible things happen to you and the people they love.

If horrible things happening is all that can help them feel better, you can’t salvage or save them.

Evil people have this in common: they’re controlling. But it’s not all about controlling you.

They often feel downright uncomfortable and powerless if they aren’t in control of every aspect of their lives.

Malevolent people are often so cruel to the world and to the people around them that they can’t entrust any part of their lives to another person.

Because of this obsession, they can come off as polite, concise, and punctual.

But when you let them get closer, they start controlling your life too, making you just like them.

Defying the wishes of an evil person doesn’t always result in outright evil actions back to you.

It may feel subtle. Not a slap to the face but a kick to the heart.

Related: 6 Signs You Are Dealing With An Evil Person

Let’s be real. Everyone lies. We all do it. Some are little lies, others are big, big lies.

But while everyone lies, not everyone is a liar.

A liar is a real special breed. They lie pathologically, constantly, and sometimes without even realizing it.

An evil liar will often lie so much that their lies are what form their reality.

In living a life of lies, their own minds become a prisoner to their own evil behaviors.

Some evil people only lie a little bit, maybe stretching the truth to make themselves seem stronger, smarter, or better.

Some evil people lie about you and others. But one thing is for sure, they are liars.

The lies serve as a tool to manipulate a reality that doesn’t serve them the way they’d like.

When caught in a lie, they will probably try to gaslight you.

Make you question reality as it is and make you continue to look to them as a source of strength when all they really are are liars.