4 Unhealthy Defense Mechanisms That We Need To Overcome 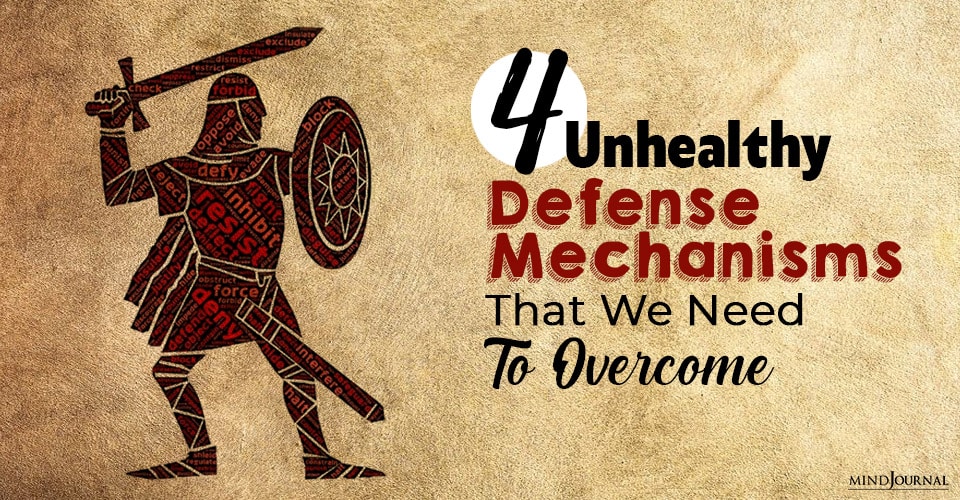 When someone finds it difficult and challenging to deal with unpleasant and unacceptable emotions, they might sometimes fall back on a few unhealthy defense mechanisms, that actually does more harm than good, in the long run.

The inability to deal with distresses can lead to feelings of helplessness and powerlessness. Lacking the ability to cope, some will erect powerful defenses in a desperate effort to avoid feeling pain. The person using a defense is generally trying to achieve emotion regulation and maintain their self-esteem (McWilliams, 2010).

Defense mechanisms work by changing the way we feel or interpret a situation. But they do not change reality. Keeping unacceptable feelings out of awareness results in the development of a “false self.” The price for this protection is the inability to develop resilience (Gabbard et al., 2012).

Projection is a defensive behavior that protects us by attaching unacceptable feelings, or motives to someone else (e.g., “You are the selfish, angry, or incapable one, not me.”).

When we project our feelings onto another person, we empty out our own frightening emotions onto another. The act of projection is a distraction that allows one to ignore the real culprit, the problem within.

Related: 5 Projection Techniques Narcissists Use To Attack Others

Dissociation is the inability to articulate certain aspects of one’s experience in verbal language. We keep unacceptable feelings out of awareness. One might say “this is not happening to me.”

The unconscious motive for dissociation is to escape from the overwhelming emotions associated with the traumatic memory. The success of therapy and lasting change requires the patient to come into contact with previously inaccessible aspects of those inner feelings. The way out of trauma is by going through it (Epstein, 1994).

Addiction may be described as a defensive strategy to avoid feelings of helplessness or powerlessness (Ulman and Paul, 2006). The person tries to compensate with addictive behavior for painful subjective states of low self-esteem, doubts, and anxiety.

The use of drugs provides a feeling of acceptance and a feeling of temporary self-confidence. However, addiction also prevents the user from understanding his distress and developing the emotional capacity to self-soothe.

The term denial (or repression) can be defined as the selective ignoring of information. Denial can be a protective defense in the face of unbearable news, such as a cancer diagnosis, to create a false sense of security.

Denial is a form of self-deception that detaches an individual from reality. To maintain a positive view of themselves, people revise their beliefs in the face of new evidence of good news but ignore bad news.

Related: Denial Of Bad Behavior: What You Can Do

For instance, alcoholics insist they have no drinking problem. Addiction can be a source of terrible shame, self-hatred, and low self-worth. Indeed, the first step of Alcoholics Anonymous is to admit that you have a problem and begin to seek help.

Defense mechanisms are forms of emotional regulation strategies for avoiding or minimizing emotions that are too difficult to tolerate. We use psychological escape mechanisms where physical escape is impossible and learn to hide from ourselves. Psychological growth requires self-acceptance, which is a state of mind that marks the end of the life-consuming struggle to transform oneself into the person one wishes one were.

Shahram Heshmat is an associate professor emeritus at the University of Illinois at Springfield with a Ph.D. in Managerial Economics from Rensselaer Polytechnic Institute. He specializes in the Health Economics of addiction and obesity, applying the insights and findings that emerge from behavioral economics research to the decision processes underlying addictive behavior, obesity, and weight loss management. His most recent book is Eating Behavior and Obesity: Behavioral Economics Strategies for Health Professionals. He is currently working on a new book, Addiction: A Behavioral Economics Perspective, to be published by Routledge/Psychology Press.View Author posts