7 Types of Domestic Abuse, Including One That’s Post-Divorce 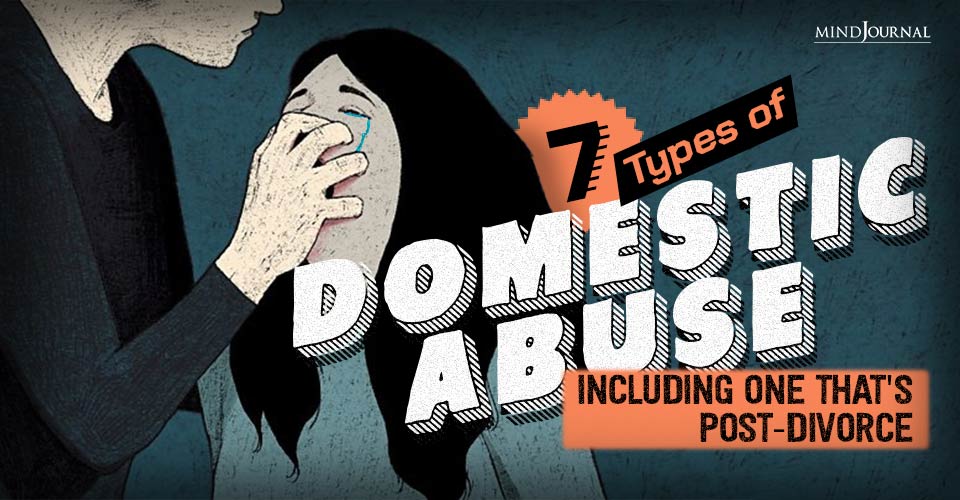 Domestic abuse is seldom the same in every case, and that’s because there are different types of domestic abuse that torment and plague thousands of people all over the world.

Clearly, abuse of any type wounds the receiver’s morale, self-image, and often physical self as well. At the same time, abuse of anyone in the family tends to harm everyone, children included.

For example, when Karen was growing up, her father never hit her. Still, watching him berate and batter her mother, and beat also her younger sister, Karen had felt traumatically angry and helpless. Her resultant hyper-reactive emotional system—what some would refer to as an amygdala disorder or maybe even as a borderline personality disorder—has caused her lifelong suffering.

First, a few points to keep in mind:

With these warnings in mind, which of the following seven types of abuse could be possibilities in your family?

A spouse’s attempts to control the partner’s behavior, friends, dressing style, finances, or activities can be a first sign of more abuse potentially lying ahead. Control generally involves telling the partner what she or he can or should not do—enhanced with criticism, threats, and anger.

Controlling behaviors chip away at the receiver’s self-esteem. In addition, by controlling who the spouse can spend time with, an abusive person can isolate their victim from potential supportive friends and relatives until he or she becomes the main or only person in the victim’s world.

Related: How To Deal With An Overly Controlling Partner

The intent of guilt, criticism, anger, and similarly manipulative behaviors may be to hurt the spouse as well as to force compliance. A spouse who attacks the partner’s vulnerabilities threatens to leave or withholds affection and approval as punishment is being emotionally abusive.

Words, and also a negative tone of voice, can’t hurt a spouse’s feelings, lower their self-esteem, and erode a sense of personal safety. Demeaning, insulting, or humiliating comments in private, and even worse in front of others, can be strongly emotionally damaging.

Telling hurtful “jokes” about you despite your discomfort and requests to stop, name-calling, swearing, insults, questioning your sanity, or ridiculing your opinions/desires all use words to cause harm.

Until recently, unwanted or forced sex within marriage was not considered rape. Married victims of sexual abuse still face considerable stigma when coming forward with their sexually abusive relationships.

Sexual abuse includes unwanted sex, withholding sex, forced engagement in any sexual activity that frightens or hurts you, refusing to practice safe sex, or preventing you from using birth control or making decisions about pregnancy/abortion.

If your partner has physically touched you, hit you, slapped you, punched you, or pushed you, it is critical that you recognize that this is physical abuse. Such abuse tends to become worse over time, so removing yourself and your children from a violent partner may be essential.

Other forms of physical abuse include beating, choking, pinning you down, spitting on you, abandoning you in dangerous places, driving at high speeds, toying with dangerous situations to intimidate you, and refusing to help you when you are sick, injured, or pregnant.

Susan Heitler is a Denver clinical psychologist and widely-read author. Educated at Harvard and NYU, Susan Heitler offers self-help information for individuals and for couples. She also writes for therapists, offering new understandings and treatments for anxiety, anger, depression, narcissism, and relationship challenges. Dr. Heitler’s office also serves as a center for the evaluation and treatment of parental alienation. She and her husband of more than 45 years are proud parents of four happily married adult children and grateful grandparents of fifteen grandchildren.View Author posts