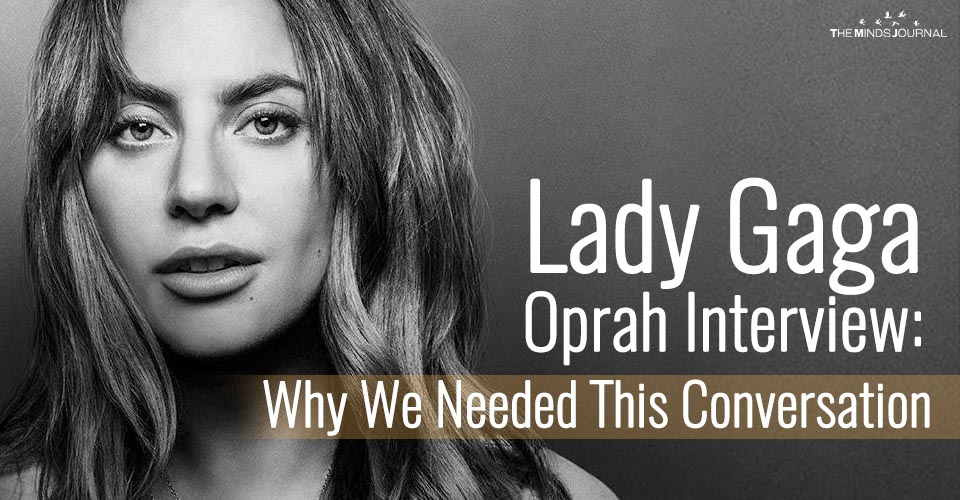 The recent Lady Gaga – Oprah interview was nothing short of heartbreaking. In her mind-numbing interview with Oprah, Lady Gaga shared how sexual assault can take the best from you, and how you can fight it.

Lady Gaga. This name is synonymous with talent, strength, boldness, feminism, and conviction. There are hardly any human beings on this planet who have not heard her name and her iconic music. Her bold and devil-may-care attitude is what makes people admire her. She well and truly does not care what you think of her, and that is where her strength lies.

But, you know what they say? The strongest people have gone through the most pain. In the Lady Gaga – Oprah interview, she revealed that she was repeatedly raped by a music producer when she was 19. Even though she is well beyond his clutches now, she is still carrying the pain and the scars from that tumultuous time. Lady Gaga also disclosed that she started to suffer from Post-Traumatic Stress Disorder (PTSD) as a result of being raped. What made the situation and Lady Gaga’s mental health worse, was the fact that she did not get to process her trauma.

According to Lady Gaga, she became a star all of a sudden and the next thing she knew was she was touring around the world. She was going from hotel room to garage to limo and the stage, and this made her repress all those traumatic thoughts at the back of her mind. But, the worst was yet to come. She started to feel intense physical pain suddenly, which was similar to the pain she used to feel after her assaults. Additionally, she used to have trouble breathing and her body used spasm continuously. It was none other than PTSD, and it broke her.

Crying and forced to face her long-repressed trauma,  Lady Gaga shared that it was a dark period in her life. She realized that in order to move on from this, she will need to face this head-on. It took her years to finally face her pain and share her story with people, in the hopes that it will help other victims speak up, take control and not have their lives defined by it.

You can watch the entire Lady Gaga – Oprah interview here:

What is Post-Traumatic Stress Disorder?

Post-Traumatic Stress Disorder is a mental health condition that can happen to literally anyone. PTSD develops due to experiencing major trauma or traumatic event such as sexual assault, war, accidents or losing a loved one due to unnatural circumstances. This condition cripples a victim mentally, where they find it difficult to cope and lead a normal life. Studies have shown that sexual assault victims have a 94% chance of developing PTSD, with around 50% of them dealing with it in the long-term, similar to what Lady Gaga experienced.

The Lady Gaga – Oprah interview clearly proved that sexual violence or sexual assault is not just the physical act in itself; it stretches far more than that. A trauma like this can wreak havoc on not just your body, but your mind also. Apart from PTSD, it can lead to a lot of other complications like:

Depression is one of the major effects of sexual assault. According to experts, it is normal for victims and survivors to experience feelings of hopelessness, sadness, emptiness for long periods of time. Apart from this, victims’ thought processes and patterns can also be severely affected.

Sexual assault is such a painful thing to recover from, that a lot of people fail to do so. They simply do not want to face the truth, rather they look to suppress the pain completely. And this is what leads to substance abuse. Indulging in drugs and alcohol takes care of the painful memories temporarily, and does way more harm than good.

Self-harm is also a major after-effect of sexual assault. Survivors and victims tend to practice self-harm in order to cope with painful and traumatic feelings. Some of the forms of self-harm are burning, cutting, biting, pulling out hair, hitting oneself physically and picking/scratching the skin.

“I like to say I used to cut as opposed to I am a cutter,” she said. “I also used to throw myself against the wall. I used to do some horrible things to myself when I was in pain.”- Lady Gaga

This is probably the most serious after-effect of sexual assault. Our society is such that, more than therapists, the victims are named and shamed. This leads to a lot of victims going through a period of guilt. They feel that it was THEIR fault that THEY were violated, and THEY could have done something to avoid it. For some people, this leads to feelings of extreme remorse and guilt, and they end up killing themselves in order to escape from the pain.

Except for these, there are a lot more lasting effects of sexual assault, and they are:

Overcoming something painful like sexual assault can take a lot of time and strength on your part. Do not be too hard on yourself, and take one step at a time during your recovery. Here are a few tips which can help make your recovery a little bit easier:

Sexual assault was always an unfortunate part of our society, but fortunately, the times are changing. The conversation about this sensitive topic is expanding with every passing day, and we are finally understanding how to deal with this, and how to help survivors deal with it. Added to that, when public figures like Lady Gaga openly talk about their own experiences with it, it makes the fight against sexual assault all the more formidable. Safe to say, the Lady Gaga-Oprah interview was an eye-opener that will not just help victims, but everyone.

If you want to know more about healing from sexual assault, check out this video below:

If you are a sexual assault victim and need any kind of assistance and help, you can contact the below-mentioned hotlines: