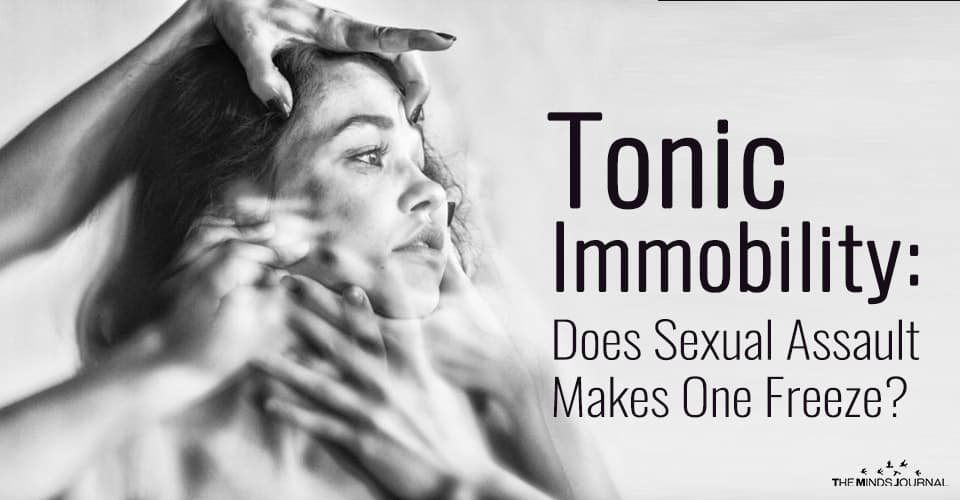 Tonic immobility: Why do women freeze up or smile when they are the target of a sexual offense?

Survivors of sexual assault can feel guilty for not protecting themselves from their attackers – I know I did. Despite spending years studying animals’ responses to severe stress, I never connected the dots between our evolutionary fight/flight/freeze response and my own inaction. After a recent assault, I looked to nature to understand why it is, that I, and other women, immobilize, smile, and simply wait for the pain to pass.

Do you blame yourself for the abuse you went through? Read Ways We Rationalize Abuse And Blame Ourselves Instead

I am no stranger to sexual assault. At 18, a professor called me into his office, rubbed my shoulders, and suggested we go to a hotel to “continue the conversation.” I managed to slink out of his office only to later find several explicit emails from him detailing all of the things he wanted to do to me. My boyfriend at the time read these and assumed I had been a participant in the fantasy. His revenge, as it were, was to assert his dominance over my body, holding me by the throat and forcing me to perform oral sex.

I didn’t report either of them.

Obviously, it was me. There was something about me. Something about the way I behaved that turned these men into monsters. Maybe it was that I never said no.

I had always been taught that women had to say no! We are told that we need to respect ourselves enough to fight, but that was the mystery to me. I did respect myself, but I could never bring myself to literally say the word “no” or fight back. My voice always just seemed to shrink away as my body went limp. Worse yet, sometimes I found myself smiling, hoping that by encouraging these behaviors at the moment I could cooperate myself out of the situation.

“Just play along until you can escape,” I thought.

I had no way of shutting down all of these men who would lurk, or stare or do something worse. Ask me outside of any of these situations what I would do and you’d hear my confident, resounding intentions to swiftly put an end to it. But each time a man harassed me, repeatedly asked me out, held me, hostage, in a booth at a bar, I didn’t stop him. Nor was I able to prevent the harassment from escalating.

Through my teens, 20s and early 30s, I believed that my inability to just say no was my own shortcoming. If I had really wanted it to stop, wouldn’t I have found away? Certainly, that’s the story we tell about countless women who have faced sexual assaults. William Henry, a member of the Alabama House of Representatives, made the following statement in defense of Roy Moore, who currently faces sexual misconduct charges from nine women:

“I think someone should prosecute and go after them.”

It should be no surprise that women blame themselves for the abuse so many of us experience.

Not long before the time of this writing, another powerful man forced his tongue down my throat and groped my breast—a pattern of behavior that was unlikely to have begun with or ended with me—and once again, I found myself frozen. But this was the incident that broke me. I could not live the rest of my life blaming myself.

Are you trying to move on from the abuse you went through? Read How My Journey Through Abuse Transformed My Life For The Better

This time, I became a student of my own experience and began to study my behavior through a lens I’d never considered, even though it’s my specialty. As a scientist, I conducted experiments on the stress responses of birds.

One phenomenon I have seen over and over is something called tonic immobility. We would trap birds, handle them extensively and put colorful bands on their legs to mark them. Understandably, all this could severely stress the bird, but when we released them they usually didn’t try to fight back or escape. We would carefully place them on the ground and often they would lay just like that, perfectly immobile, for several minutes before flying freely away.

Once I was safely away from my last predator, I saw myself as the bird: breathing heavily, still on the ground, and immobile, feeling as if my wings had been clipped.

Playing Dead is a survival tactic when animals become severely stressed. We often talk about the flight or fight response but conveniently skip over the third option, which is to freeze. Instead of problem-solving or prioritizing any cognitive activity, our brains shut down their output to our bodies. It is an involuntary, reflexive, unlearned physiological response elicited in high-fear situations. In other words, no matter what we say we’ll do in the situation, we can’t override our body’s natural response at the moment. It’s the equivalent of trying not to blink when someone throws something at our face. Our bodies have evolved a defense mechanism that has hundreds of thousands (if not millions) of years of success behind it. That mechanism is to freeze.

Women are ancestrally the physically weaker and slower gender. Jackie Joyner-Kersee is fast but still significantly slower than Usain Bolt. So fighting or fleeing were often not viable options for escape. The best strategy? Freeze.

During a sexual assault, we can risk death by trying to escape or fight—or not. Doing our best to appease the dominant members of the tribe might allow us to escape with minimal bodily damage.

When our closest primate cousins, bonobos and chimpanzees, are afraid or nervous around one another, they bare their teeth in a way that looks remarkably like our smile. It’s a gesture of submission most often used by low-status members to appease attackers and protect themselves from violence.

In 2001 Marianne LaFrance and Julie Woodzicka conducted a study on college-aged women in which subjects were asked highly inappropriate questions in a job interview setting (e.g., do you wear bras to work, do you find yourself sexually desirable). Their results further highlight the conflicting feelings and actions of women in such situations. Each of the women had previously said that if they ever found themselves being sexually harassed they would be confrontational, leave, and report it. When it actually happened not a single one reacted as they had imagined they would. Instead, the researchers saw a startling response in the video recordings of these interactions. The women sat patiently and answered the questions … while smiling.

Whether you take comfort in knowing you are not alone or are horrified by the numbers, a recent study conducted by Möller, Söndergaard, and Helström showed 70 percent of sexual assault victims reported significant tonic immobility. In what seems like a sick twist of biological programming, these same women showed a 2.75-times increase in the development of PTSD and 3.42-times increased risk of severe depression.

Women who have experienced the involuntary response of tonic immobility return in our minds again and again to the violation, recalling every opportunity we think we had to stop it. All we see is ourselves paralyzed with fear, unable to say no or fight back. We might even see ourselves smiling, acting like willing participants. These reiterations can cause so much emotional damage. We know we were powerless, but still, we find ways to blame ourselves.

Even worse, due to our ironic biology, the more exposure we’ve had to these traumas and frozen in those moments, the more likely we are to react with the same tonic immobility response the next time. Our brains record our survival from the last attack as a success and are further convinced to use this strategy in the future.

This is a fight that women don’t get to walk away from. Merely existing in the world makes us casualties of this war, but it’s time we mobilize. Where do we begin to fight our biological programming? I wish I had better solutions, but just because I don’t doesn’t mean we should cease the discussion. The problem is complex and messy and it’s exactly these reasons why we need to be paying closer attention.

I offer the first step: stop blaming ourselves for “doing nothing.”

Sexual assault is never your fault, and blaming yourself for it can only make things worse. If you are experiencing tonic immobility, talking to a therapist can help you a lot in fighting it and defending yourself against sexual predators.

If you want to know more about tonic immobility and how you can counter it, check out this video below:

After earning her PhD with research designated as “transformative” by the National Science Foundation, Dr. Rebecca Heiss went on to hold multiple appointments in academia, applying her research to solve practical problems in overcoming what she refers to as “biological ghosts” - subconscious behaviors that haunt modern life. She is currently launching a new self-awareness, 360-review app, called Icueity (www.icueity.com), to help every individual reach her/his full potential and finishing her new book, Instinct, due to be published in March 2021. She has been honored to speak internationally on her work, including multiple TEDx talks, and has found her calling in helping others recognize the power of biological applications in their lives. She is a full-time speaker and lives in South Carolina with her spoiled rotten dog named Guinness. Every day she tries to live her life motto: “spread happy.”View Author posts