Why Does the Tone of Your Voice Makes Such a Difference 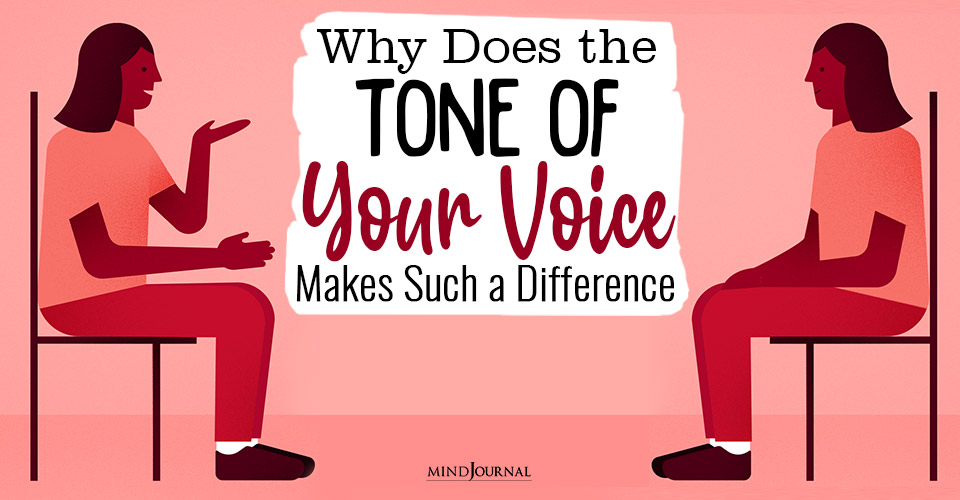 Ever wonder why does the tone of voice matters when communicating with others? If you sound too sweet or too harsh? In this article, you will be able to learn why the tone of your voice makes a difference when it comes to conveying a message or expressing yourself.

Why Does The Tone Of Your Voice Matter

The tone of your voice is important.

I remember times I felt frazzled or aggravated and then said something with an edge to it that just wasn’t necessary or useful. Sometimes it was the words themselves: such as absolutes like “never” or always,” or over-the-top phrases like “you’re such a flake” or “that was stupid.” More often, it was the intonation in my voice, a harsh vibe or look, interrupting, or a certain intensity in my body. However, I did it, and the people on the receiving end usually looked like they’d just sucked a lemon. This is what I mean by tart tone.

People are more sensitive to tone than to the explicit content of spoken or written language. To paraphrase the poet Maya Angelou, people will forget what you said, but they’ll remember how you made them feel. And we are particularly reactive to negative tones due to the negativity bias in the brain (written about in previous posts).

Consequently, a tart tone hurts others. This is bad enough, but it also often triggers others to react in ways that harm you and others. On the other hand, paying attention to tone puts you more in touch with yourself because you have to be aware of what’s building inside—promoting mindfulness and builds up its neural substrates.

Containing negative tones prompts you to open to and deal with any underlying stress, hurt, anger. It reduces the chance that the other person will avoid dealing with what you say by shifting attention to how you say it. Cleaning up your style of expression puts you in a stronger position to ask people to do the same or act better toward you in other ways.

As a proverb says, “Getting angry with others is like throwing hot coals with bare hands: both people get burned.” Much the same could be said about throwing tart tone.

Shifting your tone doesn’t mean becoming sugary, saccharine, or phony. Nor does it mean walking on eggshells, becoming a doormat, or muzzling yourself. Actually, when people shift away from being snippy, curt, snarky, derisive, or contentious, they usually become stronger communicators. They’re now more grounded, more dignified when they bring up something. They haven’t squandered interpersonal capital on the short-term gratifications of harsh tone.

Related: 8 Tips To Strengthen The Voice Of Your Intuition

Sometimes people are tart with each other in playful ways, and that’s OK. But keep watching to see how it’s landing on the other person.

Be mindful of what’s called “priming”: feeling already mistreated, annoyed, irritated—or already in a critical frame of mind. Little things can land on this priming like a match on a pile of firecrackers, setting them off. Maybe simply take a break (e.g., bathroom, meal, shower, run, gardening, TV) to clear away some or all of the priming. And/or try to deal with hurt, anger, or stress in a straightforward way (if possible), rather than blowing off steam with your tone.

Rick Hanson, Ph.D., is a psychologist, Senior Fellow of the Greater Good Science Center at UC Berkeley, and New York Times best-selling author. His books have been published in 30 languages and include Neurodharma, Resilient, Hardwiring Happiness, Buddha’s Brain, Just One Thing, and Mother Nurture – with 900,000 copies in English alone. He’s lectured at NASA, Google, Oxford, and Harvard, and taught in meditation centers worldwide. An expert on positive neuroplasticity, his work has been featured on the BBC, CBS, NPR, and other major media. He began meditating in 1974 and is the founder of the Wellspring Institute for Neuroscience and Contemplative Wisdom. He loves wilderness and taking a break from emails.View Author posts