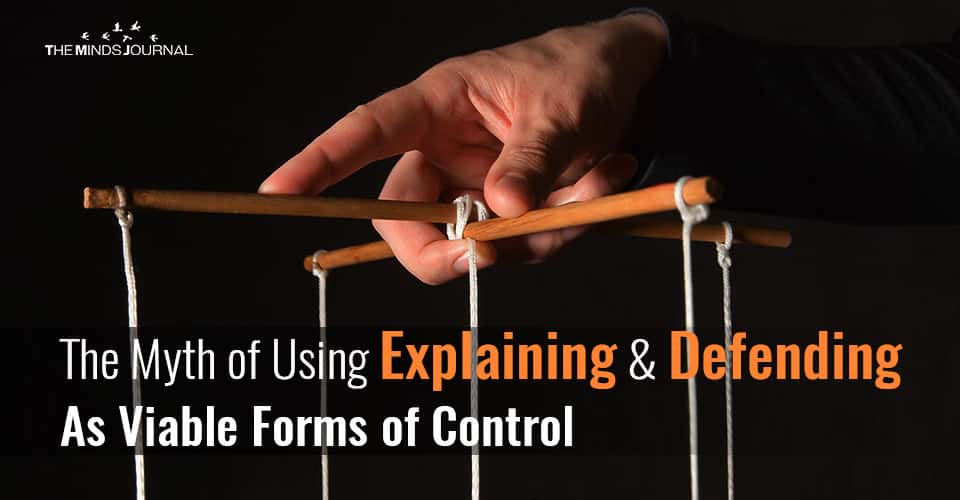 Do you believe that explaining and defending will convince the other person to see things your way? Has this ever worked?

“What’s the matter with you?”
“How could you do that?”
“Explain yourself, young lady/young man.”
“Why are you dressed like that?”
“Why are you late again?”
“What did you do to your hair!”

How often did you hear some variation of this when you were growing up? I heard it all the time. And what I learned to do was to desperately defend and explain in fruitless attempts to get my mom or dad to stop judging me and SEE me. Or I would apologize and become the “good girl,” so they would approve of me.

But that didn’t stop me from trying because I just didn’t know what else to do – other than completely give myself up, which is what I eventually learned to do.

When I got married, I continued in the same pattern – first trying to explain and defend and then giving myself up. The result was, of course, no better than it was with my parents. Again, I had no idea what else to do.

What Else To Do

It took many years, but I finally accepted that defending and explaining only leads to more and more conflict, since the other person feels controlled and goes into resistance.

For a long time, I didn’t want to see that defending and explaining were forms of control. After all, I just wanted them to see my point of view. What’s controlling about that? I convinced myself that if only they understood me, then they would change.

Now I know that using defending and explaining as viable forms of control is a complete myth. Not only does it not work to convince anyone to see things my way, but it always exacerbates the conflict.

So what I do know when someone gets angry and judgmental is I stop the conversation. I lovingly disengage. I say something like, “We are not going to get anywhere this way. Let’s talk later.” Or I say, “I don’t like being judged. Let’s try to talk about this later.” I say this with kindness, not anger or blame. I do all I can to keep my heart open so that when the other person is also open, we can have a good open learning conversation.

Related: 12 Steps to Getting Someone to Open Up

An interesting thing happens when I disengage rather than argue, explain or defend. The other person has nothing to push against, nothing to resist since I’ve let go of trying to control how they see things, or how they see me.

Related: Psychology Of Mean People And How To Deal With Them

By dropping my end of the rope, there is no tug of war, no power struggle. Often the other person will say, “Oh, sorry, I didn’t realize I was judging,” with open energy, and then we can continue the conversation.

Most people do one of three things when someone is trying to control them:

But even if one of you does give in, the energy between you is strained rather than loving. You might win the war but lose the love.

When each person opens his or her heart to learning and caring and kindness, then whatever the issue is can get resolved. Resolution occurs only when you drop your intent to control and move into an intent to learn and love.

Did explaining and defending ever work for you? Share your thoughts in comments.

Watch out this video to know how to deal with difficult people?