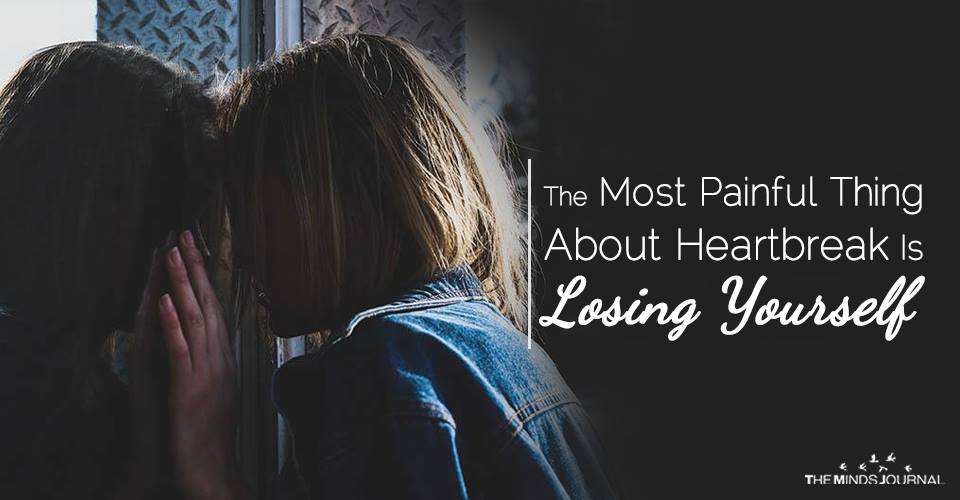 Heartbreak, it turned out, was the only thing that was ever going to fix my broken heart.

I lost myself not that long ago. My marriage died; I couldn’t focus. It’s easy to feel bad for yourself when you have a broken heart, so there was a bit of that. But self-pity is worthless and it didn’t take me long to understand that.

“Then what though?” I asked myself. “What the hell do I do now?”

Much of what happens in the wake of any divorce or breakup is autopilot stuff. You end up going into survival mode; you end up just trying to get through every day the best you can. Even when you feel like laying down in the middle of some damn freeway and letting some semi pop your guts out through your eye sockets, you usually don’t.

There were a lot of times when I wanted to, but no. I have kids. I have bills I need to pay. I have things to live for and things I have to live for. At least that’s what I kept screaming at myself with ten thousand nasty glares in the bathroom mirror.

But it’s hard, especially after losing yourself in a relationship. It’s tough on a spirit when something that once seemed like real love morphs into something that’s anything but. No one can take away the hurt. Nothing you tell yourself or make yourself think or do ever sets you free from the crushing feelings that heartbreak dumps all over your word.

Regret, resentment, anger, blues — they can all add up to this paralyzing sense of inadequacy. And on the outside you might be holding it down, giving good face to your friends and at work, smiling for the kids because you need to be “strong.” I hate that word. Strong. It’s so ridiculous. This whole notion that you’re supposed to be strong when you’re devastated or in denial, it’s all BS.

About three months after we separated, I began to understand a thing or two about what was going down. It took awhile, but once the truth settled in — that we were done and there was nothing I could do to change that — I began to gradually recognize that I was going to have to release my grip. I needed to let my sad and sorry ass get washed downstream.

Heartbreak, it turned out, was the only thing that was ever going to fix my broken heart. Isn’t that some sh*t?

So I let go. I don’t know how it happened, whether it was across a span of time or if I simply managed to go minor league crazy overnight. I cut myself off from certain bright parts of being alive and I climbed inside some sort of substitute for myself.

Up until we broke things off I hadn’t realized it, but I had become kind of dead inside. And staring down the barrel of divorce only made me feel deader.

That’s not how it was supposed to feel. I mean, I kept thinking that I was supposed to at least glimpse at the sparkle of impending liberation as I settled into the new life groove that divorce was bringing down on my world. But that didn’t happen.

I felt alone as hell. I felt unable to comprehend the future I had to wrap my head around. At night, I’d get the kids to bed on the nights I had them and I’d exercise until my body wanted to break. Then I’d drink a glass or two of wine and stare at the TV, or scroll for miles down my Facebook feed until I was mining through posts so long gone and out of date that even the people who posted them had surely forgotten they had ever done so.

I started taking selfies of my face and putting them in my Instagram. I knew the few close friends and relatives I had were thinking that I was losing my grip. I could sense that thing any one of us feels when people who still love us begin to grow confused by us. Or even worse: made uncomfortable. But I didn’t give a damn. And I wasn’t wrong, either.

No one anywhere on this planet has any clue what it feels like to feel as blue as you feel sometimes. Or as blue as I feel. And right there in the middle of this anti-Renaissance/Dark Ages that I was living through, I knew damn right that I had no idea what I was doing with myself anymore.

There are a lot or people out there who wag and wave their condescending fingers at people who take selfies and throw them around on the internet. But take it from someone who has been there, more often than not, there’s a heap of blues behind the smile, the abs, the cleavage, the duck lips, the snarl.

Lots of selfies are the creation of people wishing they could crawl inside a carefully created self-portrait of themselves. To live frozen and forever in some random moment of looking superficially fine, that’s something lots of broken-hearted people want to do.

Sometimes solace comes in strange ways. Sometimes all it takes is seeing your own picture lit up from behind to feel alive again, if only for a few moments. If only until you or someone else clicks “Like” or leaves some innocuous comment.

It’s entirely possible, when you’re down and out, to numb certain very real pains with smart phone snake oil. Trust me, it is. And if you can’t relate at all then I’d say you’re lucky.

Behind every beating heart there’s another beating heart waiting to take its place. No one ever talks about that but it’s true. There’s a replacement heart out back. If you could step out of the back screen door of your mangled ticker, the one you’ve been using since the day you were born, you’d ease out onto the green grass of a place you had no idea even existed. And boom! Like a spaceship landed in the yard, you’d be looking up at the lights and the steam coming from a brand new day.

Our old hearts die quicker than we ever realize.

At least the figurative, emotional parts of them do. We regenerate. We rebuild. And eventually, people like me, we reinvestigate at long last what it might feel like to be alive again. God, it takes forever though.

But I’m feeling better lately. I don’t know why exactly — I’ve got a million things I ought to be scared as hell about or upset about or pissed off about. The dark side gets old after a spell. It really does. These days I’m thinking that I’m coming back, but maybe improved in certain ways only a long slog down through honest heartbreak can ever spit a better human back onto the streets.

I got really drunk on empathy, I can tell you that much. Hopefully that’s an upside to losing yourself in a relationship and subsequent heartbreak. Nowadays, I see some meth head staggering around a parking lot or some little kid tantruming down at the the Walmart, and I feel like I get it in some strange way.

I see the people posting the endless selfies and I don’t cringe. I feel you. In my own little way, I understand. Messages show up in my inbox, countless words from strangers I’ve never met who somehow want to connect with me because maybe they think I might be alright, might have some insight into this dark divorce thing they’re going through too.

I don’t answer the messages as much anymore. I just can’t. I’ve made my peace with my own resilient blues and I need to move on however I can. I need to move on in ways that can only exist outside my backdoor/in the real world.

Heartbreak almost killed me, but I’m still here. And it feels good just to say that too, just to say I’m feeling a bit better here and there.

Even if I’m always blowing smoke up my own ass.

Even if losing yourself is all that a busted heart can ever offer any of us in the end.

Serge Bielanko is a 43-year-old father of three kids. He lives in Central Pennsylvania and enjoys fly fishing for trout, red wine, fat novels, and pizza.

Heartbreak Changes You as A Person: Stronger And Happier

This Is How You Know That You Have Recovered From Heartbreak

A Happy Comic About The Real Pain Of Heartbreak