Modern Relationships: 10 Men and 10 Women On The Reason They Broke Up With The Love of Their Lives 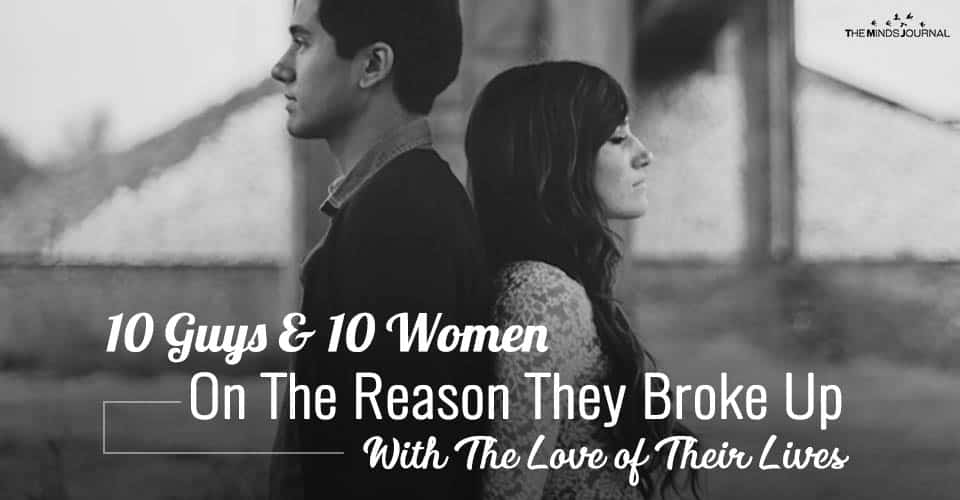 How love is changing in Modern Relationships: 10 Men and 10 Women On The Reason They Broke Up With The Love of Their Lives

Love is one of the biggest reasons for happiness in this world, and every human being is out there looking for love whether they admit it or not. But sometimes, love and relationships can be tough, and unfortunately, you might have to give up on the love of your life.

Here are 10 men and 10 women, who had to take this unfortunate step and they are opening up to us about the reason why they broke up.

1. “I broke up with my longtime boyfriend because I developed feelings for one of my co-workers. I didn’t cheat or anything, but I was starting to lie to my boyfriend and I knew it wasn’t fair for him or me.” ― Ashley, 25

Has anyone left you for someone else? Read 9 Reasons She’s Going To Leave You For Another Man

2. “I had to end it after three years of dating. He was the love of my life. But, we had little in common. And we slowly began to grow apart. It wasn’t his fault. I just knew that our love was unraveling.” ― Leslie, 29

3. “I ended it with him after he popped the question. I always thought we were going to get married. But, when he asked me to marry him, I felt myself pause. I hesitated. That’s when I knew it wasn’t right.” ― Veronika, 24 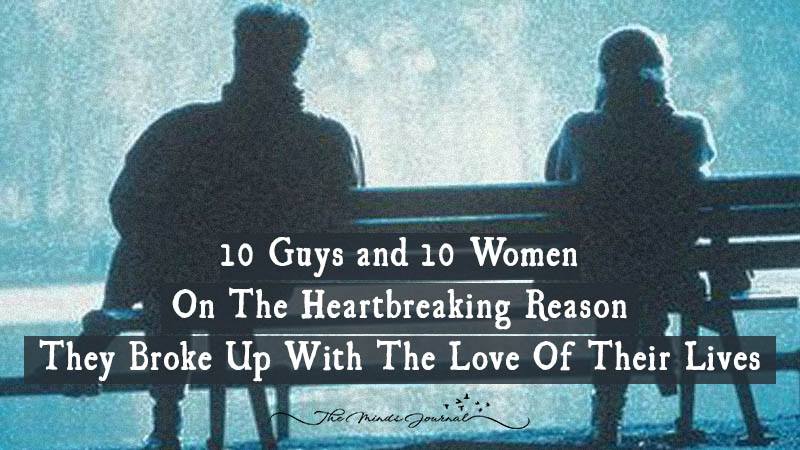 4. “I wanted to move to the big city. He loved the country. We were complete opposites. And I broke up with him right after we moved in together. I followed him to his hometown, but I didn’t fit in there at all.” ― Margaret, 30

5. “I broke his heart when I called it off. He was my first love. And my first everything. But, I was about to start grad school and I knew that in some way, he was holding me back from my full potential.” ― Kim, 23

6. “I got divorced with my husband after only three years of being married. I always knew he had anger issues, but one night, it escalated and he went too far. I packed my bags that very night. And I never looked back.” ― Lauren, 35

7. “I broke up with him because I knew his parents didn’t like me. In fact, they despised me. They were against my religion, my beliefs, and even my everyday choices. I knew he didn’t care about that or about how they felt. But I did.” ― Brooke, 21

9. “We always promised each other forever. And I truly believed nothing would ever break us. But, another girl caught his eye. I followed him one night when he told me he was going to get gas for the car. And there she was. With him. In the back of my car. I never told him I saw him with her. I just left.” ― Christy, 22

10. “I knew that he loved me with his whole heart. I was his first girlfriend. He lost my virginity with me. But over time, he became too clingy. It was all too much. I know he didn’t mean any harm. But, he became a burden for me, instead of a boyfriend.” ― Kirsten, 23

1. “We had been dating for three years. After moving in together, I discovered that she self-harmed due to her bipolar disorder. She never told me any of this, after all of the years we had been dating. She was so good at hiding it. When I asked her to go get help, she refused. I ended it with her because she used me like a vice instead of helping herself on her own.” ― Chris, 27

2. “After a year of dating, I knew that I didn’t see a future with her. She was the love of my life, yes, but we had little in common. Almost everything we talked about turned into arguments.” ― Jack, 23

Has your boyfriend ever broken up with you because they weren’t ready for commitment? Read Why Do Guys Pull Away: 5 Real Reasons Your Man Is Withdrawing

3. “She had just graduated college and I was still a senior. I broke up with her because she needed to spread her wings. She needed to do something with her life, and I didn’t want to be the reason she held back.” ― Michael, 22

4. “I ended with my soulmate. It wasn’t anything she did or didn’t do. But, I wanted to move to a new city and travel more. She wanted to build a family and stay in the same place. I couldn’t sacrifice my ambitions for her.” ― Conor, 29

5. “I had to end it with her because my parents didn’t like the lifestyle she was living. They told me to pick them or her, and if I picked her, they were going to disown me. So, I picked them.” ― Matt, 24

6. “It was against her religion to not marry someone with the same religion as her. I broke it off because I could see the weight she had to carry on her shoulders to hide me from her loved ones.” ― Joel, 31

7. “I ended it due to long distance. We had been together for four years but, there wasn’t an end in sight for the long distance. I just couldn’t do it anymore.” ― Luke, 28

8. “We met when we were fourteen. I loved her so damn much. But after dating for six years, I decided that I needed to explore more. I had only ever been with one person in my entire life, and I wanted to experience more. I broke her heart.” ― Jasper, 21

9. “I ended it with her because for her, I was her whole world. I was her everything. It was unhealthy. And she deserved to love herself more than someone else.” ― Ethan, 27

Have you ever went through a breakup and wondered what went wrong? Read This Is Why He Broke Up With You

10. “I broke up with my wife of ten years. After years of little fights that escalated into both of us excessively drinking, I decided to leave and get some serious help. I still love her with my whole heart. Maybe one day, we can start over.”― Kevin, 37

Everyone wants to be with their partner for their whole lives. But sometimes, certain situations stop them from doing so, and hence the reason why they break up. Breakups might be painful, but what is more painful is staying in an unhappy relationship.

If you want to know more about couples and the reasons why break up, watch this video below: