The Eight Worldly Concerns and How They Block Our Spiritual Progress 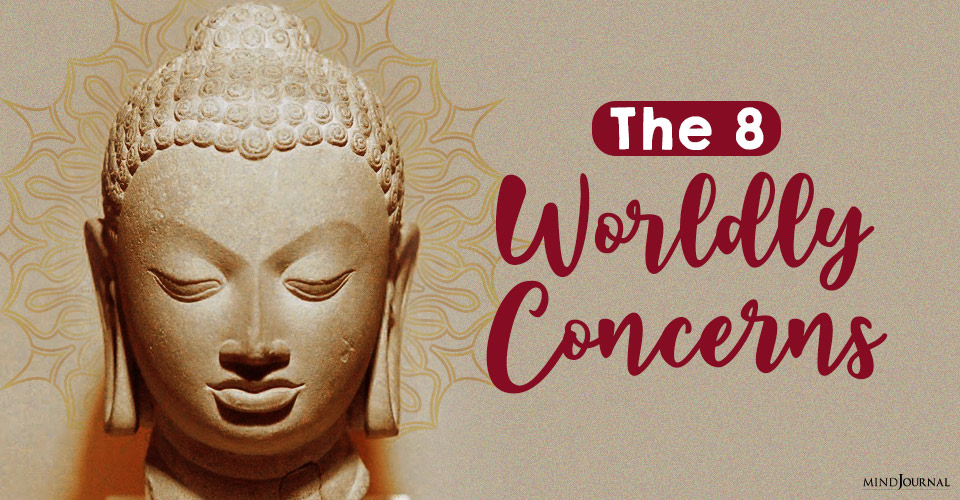 The eight worldly concerns can prevent us from experiencing inner peace and moksha despite how much we try to reach Nirvana, according to Buddhism. The eight worldly concerns refer to eight particular transitory things in life which limit our sentient understanding to experience happiness. Buddhist beliefs reveal that being materialistic or clinging to pride and ego or having a desire for material possessions amounts to suffering, which hinders our ability to experience true happiness.

So before we start learning about chakras, yoga, or meditation, we first need to learn and understand the core principles of the worldly dharmas.

“The first step to your spiritual awakening is to work on your concerns,” explains Exploring Your Mind. Once we have learned to eliminate negative thoughts, senseless desires, toxic attachments, and insecurities related to loss, we can finally begin the process of letting go and detach from material attachments.

Related: 8 Buddhist Beliefs To Heal Your Soul and Find Happiness

What Are The Eight Worldly Concerns?

Aṣṭalokadharma refers to a set of mundane worldly obsessions which often motivate individuals who tend to lack spiritual strength and perspective.

Being preoccupied with these worldly concerns can cause us a lot of suffering. This is why Buddhism encourages spiritual seekers to detach from the attachment of these dharmas.

The eight worldly concerns are usually described in four pairs, which are:

The Buddhist concept of the eight worldly concerns is primarily based on detachment & impermanence. Certain learned behaviors and programmed mentality make us believe that our identity revolves around desires, recognition, social attention, and material possessions. We believe these are crucial for our success and existence. However, we tend to forget that nothing is permanent. Impermanence is the very essence of nature and life.

Despite how much we feel attached to our expectations and desires, life will always be uncertain and dynamic. When we don’t realize that control is nothing but an illusion, even the slightest bit of change in life can severely affect our emotional and mental well-being. “Unfulfilled expectations can stress you out or make you suffer. While your mind is under the influence of these dharmas, you’ll never be free,” adds Exploring Your Mind.

Ringu Tulku Rinpoche writes “Usually, we think that happiness comes from wealth, power, popularity, and pleasure, and that these four things will give us everything that we need. But from a spiritual point of view, these things are not the answer. Being rich is not a source of happiness, and being poor is not a source of unhappiness… Lasting peace and happiness do not depend on outer conditions; they come from seeing in a clear way.”

Related: Mono No Aware: The Awareness Of The Impermanence of Things