The Dark Side of Nice People 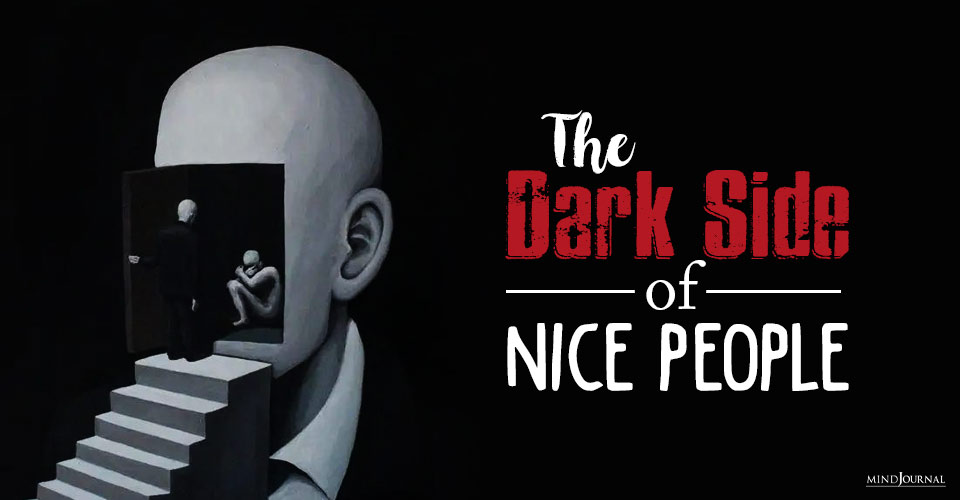 Human beings are a blend of the good and the bad. Some are kinder, while others are not. Some people believe that being polite is one of the most admirable traits a person can have. Isn’t it true that all nice people are wonderful to be around? They always appear to be composed, calm, and trustworthy.

However, as we dig deeper and understand a person’s motives, it’s clear that there’s a dark side of nice people. The best thing we can all do is acknowledge ourselves. As there is always more than what meets the eye.

“I have a dark side. I think everyone does.”

Why Are Some People So Nice?

We often wonder how someone can be so nice. They are considerate and caring people. But they may have their own motives for being nice. Some of these reasons are:

1. They serve their martyr complex

Have you seen certain people going out of their way to do things for you? Nice people will sacrifice their own happiness and well-being to care for others. People with this attitude maintain a blend of selflessness and servitude. They want to be the martyr of your life and demand to be showered with appreciation and praise for their niceness. This is one of the dark sides of nice people.

2. They use it as a form of manipulation

Being too nice can be used as a form of manipulation to get what they want. Narcissists men often display unwarranted affection towards women to lure them into their trap. They are masters of deceit and manipulation. They begin by convincing their partner that they share a unique and special bond by being too nice. Once the victim is in their trap they begin to exert control over their victims. A 2020 study suggested that narcissists tend to go out of their way to impress others.

One of the darkest sides of nice people is that they are liars. Nice people constantly lie to themselves when they agree to do things they don’t enjoy. They lie to other people to make sure the other person is not upset. They are so anxious about upsetting others or being perceived as someone who is selfish, they become dishonest. Nice people are dishonest about their true selves. Hence they lack the courage to stand up for what they believe in. In relationships, being too nice without being honest can only give birth to mistrust and resentment.

4. They are people pleasers

Nice people are often people pleasers. Their first instinct is to please everyone. Nice people want to be nice despite the consequences. Hence they say yes to everything even if they don’t want to. People-pleasing goes beyond kindness and being nice. It involves alteration of words and actions for the sake of making someone happy. The urge to please people all the time and allow other people’s wants above our own can have a negative effect on ourselves and our relationships.

Related: 9 Signs You Are Being Overly Nice and People Have Started Taking You For Granted

The Negative Effects Of Being Nice

There are several negative effects of being nice. They are:

Related: 4 Signs You Care Too Much Of What Others Think And How To Stop