21 Struggles Only People Who Are “ALWAYS LATE” 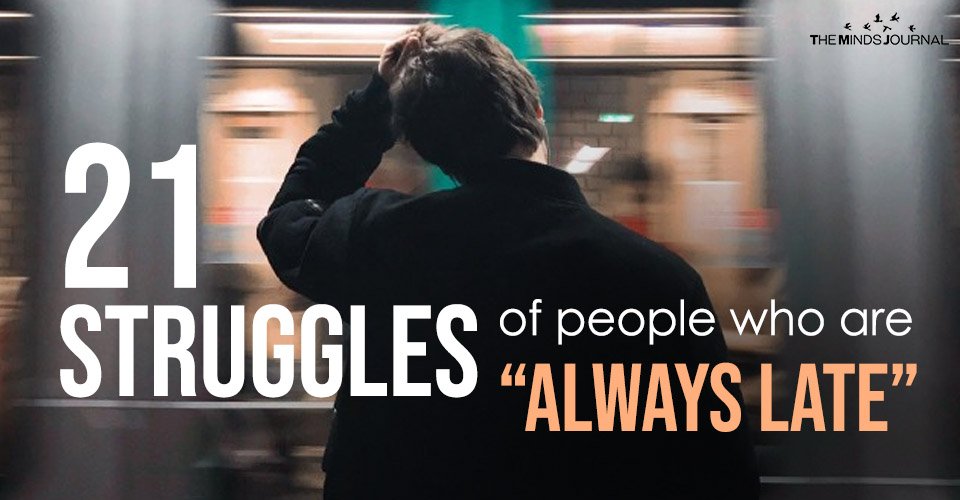 We’d probably be late for our own funeral.

I had a date last week. We were supposed to meet at a restaurant at 7 p.m. At 7 p.m., when I was still miles away from the restaurant, I texted the guy and said, “This might be a good time to mention that I’m one of those annoying, perpetually late people.”

I was late for a variety of reasons: my hair looked crazy, my kids needed to tell me a very long, involved story about hunting for Sasquatch right as I was about to walk out the door, the place we were supposed to meet at was 40 minutes away, I got lost, I got stuck behind a train, and I was also dealing with the paradoxical “extra time.”

The struggle is real, people.

It isn’t our goal to make you insane while waiting for us. Well, it isn’t usually our goal, but I suppose some of us might use tardiness as punishment for some of you.

What? I didn’t say I’d ever done that! But really, it isn’t about you. Promise.

2. We’re not good at managing our time.

People think we don’t care about their time. It’s not that we don’t value your time; we just aren’t really good at managing our time.

We have this idea that we can get ready in half an hour. It never works that way, but we’re optimistic that one day there will be a glitch in the space-time continuum and it will work.

3. Our friends don’t trust us.

Our friends know that when we text them, “be there in 10 minutes,” it really means, “I’m thinking about turning off Netflix and getting in the shower.”

4.We generally try to be on time. Really.

And the younger those kids are, the later we’ll be late.

It happens. Just as we’re about to walk out the door, we have to help find an escaped Guinea pig, explain the Pythagorean Theorem because our kid’s teacher assigned 20 pages of math homework due tomorrow, or comfort a kid because her imaginary friend won’t play with her.

It takes time to look this good. Before I go out, I have to apply 12 coats of mascara and change clothes at least 8 times.

And let’s not forget the constant battle of what to do with my hair — straighten it, decide it’s too humid and I look like Roseanne Rosannadanna, curl it, realize that that makes it worse, wash it and start over, apply a quart of goo and straighten it again.

You should be happy that we care so much about how we look for you.

You know what happens when you show up on time? You might be the first one there! Then you have to pull out your phone and go down your contact list, texting random friends so you don’t look like a loser sitting there by yourself.

“I know I haven’t talked to you in 4 months, but how are you? Oh, wait, never mind. My date is here.” Awkward.

If we get there on time and our date or friends don’t show, we could be sitting there fake texting, drinking, and eating our weight in bread-sticks for hours before we realize we’ve been stood up.

If we’re late and our friends aren’t there, we can pretend that we just missed them. You know, on account of us being late.

Our alarm clocks come equipped with this thing called the “snooze alarm.” When you hit it, you get to sleep an extra 9 minutes. I know, right?

If you hit it a second time, you get 18 minutes. A third time gives you nearly half an hour. This can go on indefinitely.

10. People are always telling us to be there earlier.

When people want us to be someplace at 7:30 pm, they’re forever telling us to get there by 7 pm, but that only works the first time or two, until we catch on to your little scheme, at which point we’ll start adding a half an hour to the time you tell us.

11. Showing up on time freaks everyone out.

On those rare occasions we actually do show up on time, people look at us about the same way they’d look if Barney (the big, purple dinosaur) showed up at their party.

Sometimes, we’d actually be on time, but there are just too many cars on the road.

I’d probably never be late if I had a flying car, but since I get strange looks from car dealers when I ask about purchasing the Chitty Chitty Bang Bang car, I guess that’ll never happen.

Some of us can’t get out the door without first noticing that a load of laundry needs folding.

And as we fold it, we remember that we need more detergent, so we run to the kitchen to add detergent to our shopping list and realize that the dishwasher needs to be emptied. You get the idea.

That date I talked about before? We were originally going to meet at 6:30 pm. He knew it would be a stretch for me to make it by then, so he suggested 7 pm.

You’d think that giving a late person an extra half hour would be a good thing, wouldn’t you?

But in reality, I thought, “Score! I have an extra half hour to get ready. Plenty of time!”

I can totally take my time now because EXTRA THIRTY MINUTES! I wasn’t going to bother painting my nails, but now that I have an extra half hour, bring on the polish. Extra time always backfires.

Read Struggling with Your Work-Life Balance? Here’s How to Improve it

15. We’ve given up trying to come up with excuses for being late.

“I thought your dog died and that’s why you were late last month.”

At some point, we just give up since everyone knows we’re full of crap and we’re late because that’s just our thing.