How To STOP Overthinking As A Highly Sensitive Person 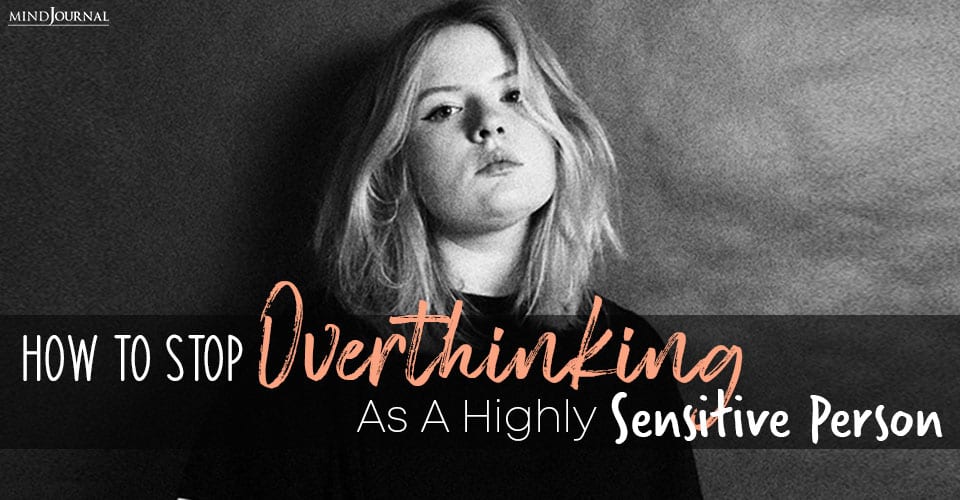 As a Highly Sensitive Person, we know that our depth of processing is more advanced than that of other people. What this means is we think deeply. We process a multitude of stimuli around us like sounds, smells, colors, and the energies of other people. The ability to absorb things and examine them deeply could result in worry, stress, and overthinking.

Since thinking deeply does not equal overthinking it is a stepping stone towards it if you are not aware of your own power.

Most HSPs tend to have a high level of empathy. They tend to worry about others and go on the verge of having people-pleasing tendencies. HSPs are also inclined to be perfectionists. We never want to make “bad” decisions. We also tend to overthink which decision to make in fear of making the wrong one.

Related: 20 Things You Do Differently Because You’re A Highly Sensitive Person

How The HSP Brain Works

Understanding how the brain of an HSP works is essential to understand why you tend to overthink. It will also begin to put the puzzle together on why you are inclined to have anxiety.

The Limbic System is the major part of the brain which controls your emotions, memory, and stimulation. Within the limbic system, there are many subparts: the thalamus, cerebrum, hypothalamus, and amygdala.

The Thalamus takes in information from our senses like smell, sight, and relays that information to the cerebrum.

The Cerebrum will then think about the information that is coming in and tell your body what to do.

For example, if you smelt smoke and saw a fire that information would come from the thalamus and it would talk to the cerebrum. The cerebrum would then talk to the Amygdala which would give your body the fight or flight response, but it is the cerebrum that would tell your body to run.

The Hypothalamus is another component in the limbic system and it sends messengers throughout your body called hormones. The primary job of this part of your brain is to create a hormonal balance inside your body. This part maintains sleep cycles, heart rate, blood pressure, body temperature, energy levels, appetite, etc.

The last element of the limbic system is the Amygdala. The amygdala is responsible for the processing of our emotions such as anger, fear, sadness, happiness, aggression, etc. The amygdala collects your emotions and links them to an event. It then stores a memory of that event in your brain based on the emotions you had during that event. Here is where your trauma lives. Your sex drive also lives in the amygdala.

Stephanie is a Life and Relationship Coach focusing on healing from narcissistic abuse, codependency, and past wounds. A major part of her teaching is a process called Self-Parenting. This practice is about learning how to become a healthy adult and learning the basic life skills that most of us did not learn growing up. She focuses her attention on teaching the strategies and simple practices to begin reprogramming your inner self. The parts of you that have been damaged from what her clients have experienced throughout their lives. Within her practice she has created a thriving YouTube Channel, Stephanie Lyn Coaching and podcast Heal, Survive, Thrive where people go to learn her teachings and gain the support they need to overcome what they have been through. Stephanie’s philosophies are simple “learn the basic principles you did not learn growing up.”View Author posts