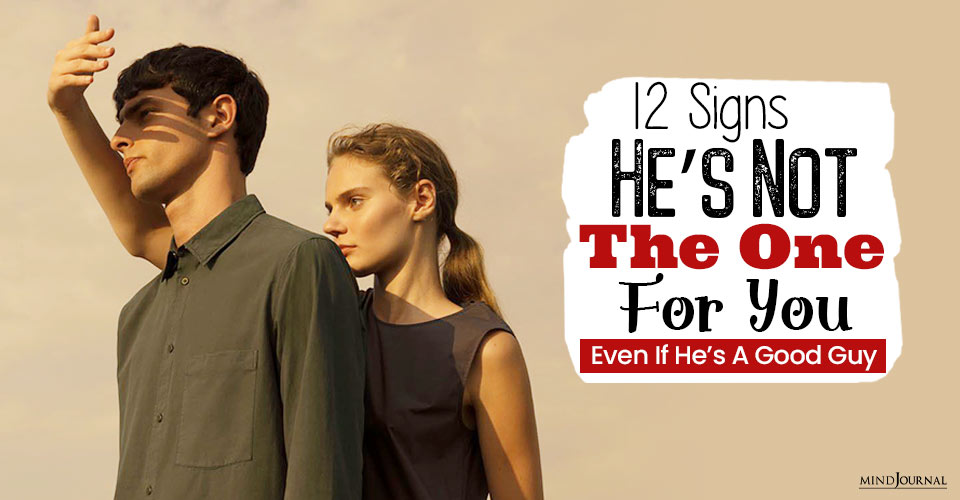 5. You like the idea of having a boyfriend than actually having him as your boyfriend.

If you are in the relationship because you enjoy ‘having a boyfriend’ rather than ‘having him as your boyfriend’, then you’re with him for the wrong reasons, and it’s one of the biggest signs he’s not the one for you. There’s nothing wrong with wanting to keep your options open and dating around, but doing that while you are committed to someone is just plain wrong.

Why be in a relationship with someone, if you’re not interested in being loyal to him, and just want a ‘boyfriend’ in your life? Actually having a serious boyfriend is way better than using someone just because you like the idea of having a boyfriend.

6. You haven’t met his family and friends despite dating each other for quite some time.

How many times were you given excuses (and lame ones if you think about them!) whenever you broached the topic of meeting his friends and family? Does he always seem uncomfortable with this? Does he always try to deviate from the topic or react negatively?

It smells fishy, doesn’t it? If he doesn’t seem interested in making you meet his loved ones, then he’s not as serious about you as you think. If he refuses to take this next step with you, then it’s one of the signs he’s not the one for you, and you’re better off without him.

Related: 10 Biggest Signs He’s Just Not Into You

7. You feel disrespected, alone and unimportant when you’re with him.

One of the biggest warning signs he’s not the one for you is when he never leaves a chance to disrespect you and ignore you. Respect is one of the most important cornerstones of a healthy, happy relationship, and if your relationship doesn’t have that, it’s not worth it.

If he tries to manipulate you, belittle you, talk negatively about you in front of others, ignore you or reveal personal things about you and the relationship without your consent, then run for your life and never look back.

8. Your family and friends don’t like him at all.

Your loved ones love and accept you for who you are, and know you better than anybody else. So if they don’t seem to warm up to your boyfriend, there must be strong reasons behind that. Because they are on the outside, they might notice things about him that you don’t.

If they seem discouraging and concerned about the man you’re dating, then give it some serious thought. Don’t think they want you to be unhappy and alone, they’re just trying to look out for you. When your loved ones don’t like your boyfriend, there must be something wrong, and he is not the one for you.

9. You never have fun together.

If you can’t have fun with your boyfriend, then what’s even the point of the relationship? Every time you have plans of going out with him, and if you find yourself dreading it and wanting to cancel, then you’re not with the right person. You should feel excited and look forward to meeting him, instead of feeling unhappy.

Related: 6 Signs He Will Break Your Heart

10. You find yourself behaving like his mother, because he is immature.

Yes, most women seem to have a nurturing and caring personality, but that doesn’t mean you will have to babysit your boyfriend all the time. If he is immature and irresponsible, then he needs to work on it and behave in a mature way. If he doesn’t then it’s one of the major signs he’s not the one for you.

If he needs time to grow up and doesn’t seem interested in dealing with his Peter Pan Syndrome, then it’s not your responsibility to mother him and take care of him. You deserve someone who knows how to take care of himself and doesn’t expect you to babysit him all the time.