How Healing Your Family Will Heal The World: The Ripple Effect of Conscious Family Relationships 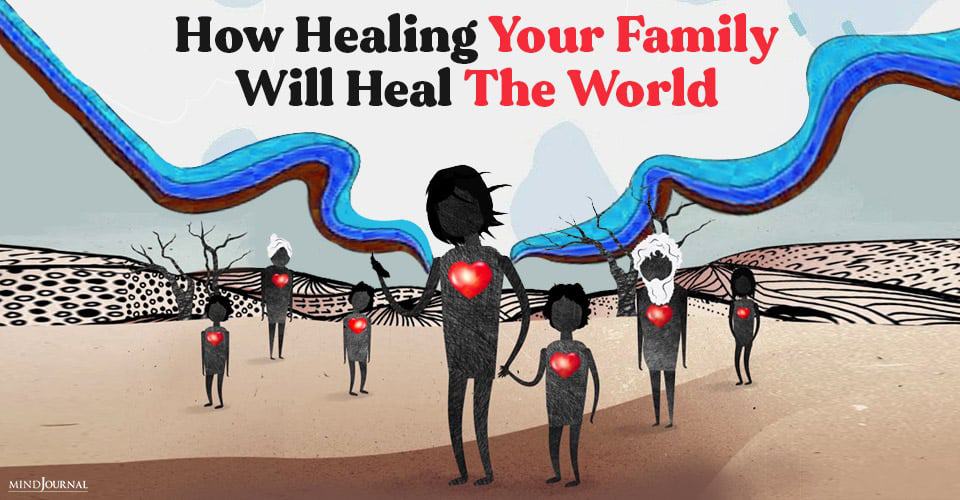 Do you often have to deal with family conflicts? Are you always in the quest to change or heal the world? Then you must heal your family to heal the world. Read on to know and understand the – Ripple Effect of Conscious Family Relationships.

Even if we are conscious and awake, we often find ourselves in families where judgment, blame, and negative energy is the norm. Maybe we also contribute to this dynamic, even though we “know better.” When family members are not responsible with their energy or accountable for their behavior, family dysfunction is often the result. In one way or another, this is true for most families and the very reason why we experience so much family discord and disconnection. From a higher perspective, what we consider normal, in many cases, is actually abusive.

But what if you could live in a family where everyone is responsible with their energy and everyone is accountable to a higher (more aware) way of living and loving?

Like many, I had a dream of healing the world, but, at some point, it occurred to me – if I couldn’t heal my own family, how could I heal the world?

At that realization, I turned my attention to the home front, and I decided that I would focus all my attention on healing the unresolved issues in my family. I was then shown that the healing of the world unfolds as a result of each family healing itself.

The “work” is very personal – it is not far away nor does it require degrees, money or special talents. The work is in healing what is right before us in our own families, and it naturally ripples out – contributing exponentially to the healing of humanity.

About 4 years ago, my 16 year old son, Travis, was often very moody, to say the least. It was literally a case of Dr. Jekyll and Mr. Hyde. There was the “Amazing Travis” who everyone loved to be around – out going, funny, open and generous. Then there was the “Downer Travis” – who no one wanted to be around – negative, cynical, closed and grumpy. Like most families, my family and I brushed over it and tolerated it. Then one night everything changed.

Travis had left the house for 20 minutes in order to drive his girlfriend home. During this time, my other 3 kids and I decided that enough was enough and we staged an intervention. In under 20 minutes, we had created a big sign with the word “INTERVENTION” written on it, and we were each prepared with our parts.

When Travis returned home in his usual bad mood, we called him into the living room where we were all sitting in a circle, “Sit down, Travis.” Travis was reluctant but he sat down anyway. We took turns speaking to Travis – telling him how his moodiness and bad behavior was affecting each one of us.

We had even composed a clever poem to illustrate the point. Although the intention was clear, we did it light heartedly and with love. Travis was laughing and crying at the same time, but he got the message. After that night, Travis took responsibility for his behaviour, and there was an immense shift. From that point on, if Travis showed any sign of moodiness, one of us would kindly let him know that it wasn’t okay, and he would course-correct. It was an amazing transformation.

But, another surprising thing came from Travis’ intervention. Although there was no talk of it, the rest of the family intuitively knew that there were now higher standards in our home – that we were now all required to be responsible with our energy and behaviour.

Maybe it was because we were ready to grow as a family or maybe we each feared the “INTERVENTION” sign. Nonetheless, things had changed – permanently for the better.