The 8 Biggest Reasons You Struggle With Consistency In Losing Weight 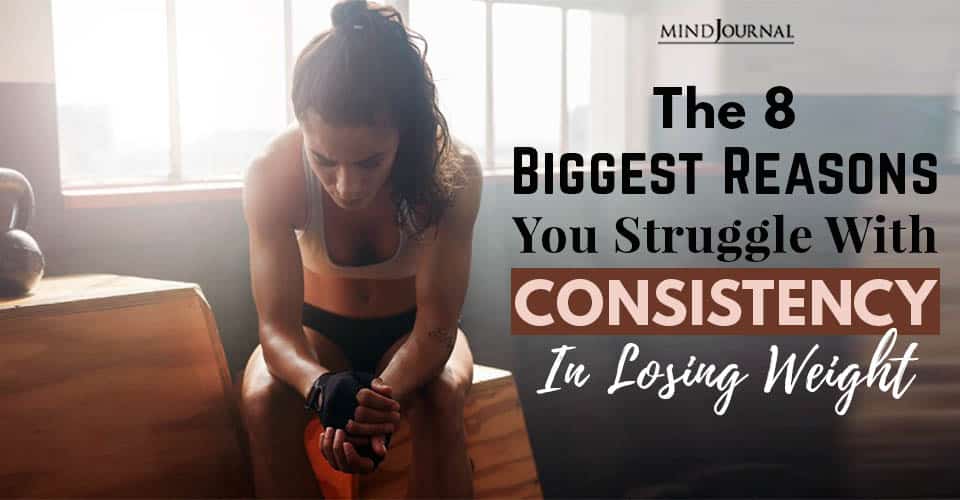 Are you unable to stick to your diet plan? Or failing to lose weight even after several attempts? All you need to know is that there is a lack of consistency in losing weight.

Consistency is the magic key.

We’re bombarded with weight loss and diet advice every day and everyone says the same thing about theirs – “scientifically proven”, “best way to burn fat forever”, “easy to follow”, “secret fat burning system”, “lose stubborn fat and keep it off”… literally, they all claim the same things but they all require the same thing.

Most people who start a diet fall off it before even losing any weight and 95-98% of those who do lose weight, regain it all within a year and as many as 2/3’s of them will be even heavier than when they started within 5 years.

The truth is, ANY diet that puts you in a caloric deficit if consistently followed forever, will result in weight loss and ultimately weight maintenance.

Despite their claims, multiple meta-analysis of long-term diet studies have shown that no one diet really works a whole lot better than any other in terms of how and how quickly they help shed body fat – there’s often not much more than a 1-3lb difference between them.

And, ANY diet that you consistently continue to follow AFTER you reach your goal, that keeps you in a deficit will help you keep the weight off – again, no one diet really works any better than another here either.

Notice the key point in those two truths?

Without consistency, they are all completely worthless – actually, worse than worthless. Dieting often causes a whole host of other problems, both mental and physical, in a large majority of people.

So, CONSISTENCY is the biggest factor in determines whether or not you’ll be successful at losing weight and keeping it off. Without it, nothing will work. With it, just about anything will.

But consistency is the exact thing that people struggle with most be it losing weight or achieving life goals. That’s why so many people spend so many decades hopping back and forth between dozens of different diets – trying to find that magic one that they can FINALLY be consistent on.

But it rarely works because until now nothing ever really did anything to change the reasons WHY we struggle with consistency.

There are several reoccurring themes I’ve seen over the years that most commonly keep people from being consistent.

The 8 Biggest Reasons (in no particular order) You Struggle With Consistency are:

1. Wiring in our brains.

Our brains are incredibly complex and have, since the beginning of time, been designed for survival. They have all kinds of annoying little tricks to make sure we stay alive and the wiring in our habit center is one of them.

What’s the first thing that happens when certain foods are off limits? Pretty much the second you decide a food is off limits you suddenly can’t stop thinking about it and craving it, right?

That’s a survival instinct that’s literally been hard wired into our brains since the beginning of time. Food equals survival so when food restriction is introduced, our brains get scared and start trying to force us to “cave” and eat that thing we think we’re not supposed to have. Then, when we finally do cave, our brains get rewarded because they love food!