Priming Psychology: How To Influence Someone’s Thoughts and Behaviors 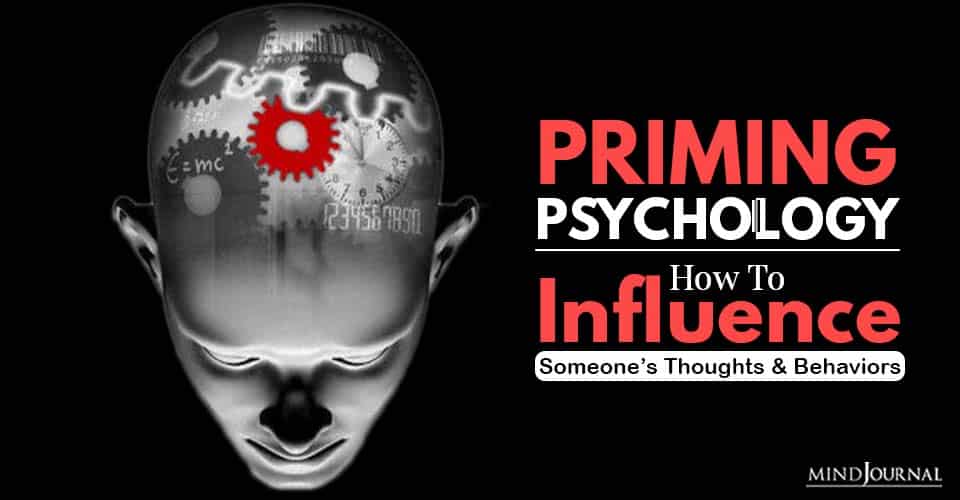 Do you want to be your best self? Or do you want to motivate someone to do their best?
Then the power of priming psychology can help you achieve success.

What Is Priming Psychology?

Priming in psychology refers to a technique where exposure to a stimulus influences how you might respond to additional stimulus later.

It is an implicit memory effect utilized to train the human mind and memory in both positive and negative manners. It activates certain associations in our memories before the introduction of another stimulus. Although it may affect various important aspects of our lives, priming can take place without us being consciously aware of it.

According to American Psychological Association (APA), priming psychology is defined as:

“In cognitive psychology, the effect in which recent experience of a stimulus facilitates or inhibits later processing of the same or a similar stimulus. In repetition priming, the presentation of a particular sensory stimulus increases the likelihood that participants will identify the same or a similar stimulus later in the test. In semantic priming, presentation of a word or sign influences the way in which participants interpret a subsequent word or sign.”

Best-selling author & founder at Science of People, Vanessa Van Edwards explains that priming involves the use of a stimulus like words, images or actions that can influence or change a person’s thoughts, perception, and behaviors. She writes “Priming is when we expose someone to something that influences their behavior later on — without that individual being aware that the first thing guided their behavior.”

Also read: What Is Cognitive Dissonance? Common Causes and How To Resolve It

The Psychology Of Priming

Psychologists believe that priming can impact our behavior significantly.
Looking at an image on currency notes can influence our political beliefs and views, or reading words like ‘caution’ or ‘walk slow’ can make us walk slowly.

According to a 2014 study, priming psychology “is mainly used to study memory phenomena or the pre-activation of concepts and motor reactions by related stimuli. In social psychology, the term priming is used for a broader range of phenomena in which an event triggers a subsequent behavior.” However, not everyone will respond equally to priming techniques.

It’s effects largely depend on what an individual is being primed for. It depends on the objective of using priming psychology on the person.

“Priming in psychology has been studied for years because it can have major effects on our behavior and habits, often without us even knowing,” says renowned author, public speaker, and life coach Tony Robbins.

He adds “Priming psychology has shown that our reactions are “primed” by our moods and experiences – for better or worse.”

Also read: What Is Your Dominant Psychological Trait?- Psychology Test

How Does Priming Psychology Work?

According to psychologists, priming is based on the notion that information is usually stored in units or schemas in long-term memory.
Their level of activation can be either escalated or decreased. A schema becomes more accessible as it becomes more activated, which is when it has a higher probability of being a conscious or direct behavior.

Robbins says, “Psychologists theorize that priming occurs because we store information in our long-term memories in groups, or ‘schemas.’ When we see a word or image, the rest of the group to which it belongs is also activated, and the related information is easier to access.”

Research has shown that schemas are generally activated together which leads to the formation of connections among them. This leads to the creation of networks in the human mind. These networks can easily distribute the activation of schemas and when one schema is activated, associated schemas in our network are also activated.

Author and educational consultant Kendra Cherry, MS, explains “When the activation of certain units of information is increased, these memories become easier to access. When activation is decreased, the information becomes less likely to be retrieved from memory.” She adds that priming psychology “suggests that certain schemas tend to be activated in unison. By activating some units of information, related or connected units also become active.”