What Is Cognitive Dissonance? Common Causes and How To Resolve It 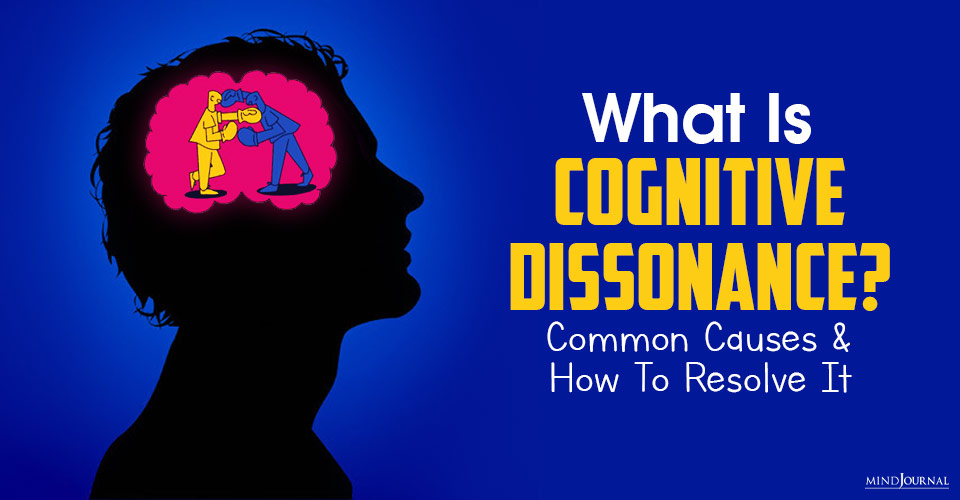 Do you buy an expensive item just to maintain social status and then feel guilty? Drink alcohol to look cool in front of your friends and regret it? Use social media for fear of missing out? If yes, then you are experiencing cognitive dissonance.

What Is Cognitive Dissonance?

Cognitive dissonance is the feeling of mental discomfort caused by holding two conflicting attitudes, beliefs, values, or behaviors. In any situation, people try to hold all their attitudes and behavior in harmony and avoid disharmony (or dissonance). And when there is a mismatch between our values and actions, we experience uneasiness.

The inconsistency between what we believe and what we do pushes us to change one of the behaviors or attitudes or beliefs to minimize mental discomfort and restore balance.

A common example of cognitive dissonance in your day-to-day life:

When people drink alcohol more than healthy limits (behavior) and are well aware that alcohol is injurious to the liver (cognition), they are in a state of cognitive dissonance.

Similarly, paying the annual gym membership and skipping workouts every day knowing that exercise is part of a healthy lifestyle leads to cognitive dissonance. The same mental discomfort is experienced by people on a strict healthy diet and cannot resist eating fast food.

When a person cheats on their wife despite knowing it’s wrong and hurtful.

Involves the use of strategies that compel a consumer to reconcile two conflicting views by purchasing a product provided the reconciliation of opposing views boosts or protects the consumer’s self-image.

Say, a savvy automotive enthusiast visits a high-end auto dealership and rejects an expensive car because it is not affordable for him. Now the salesperson says that “a lot of Americans aren’t sophisticated enough to understand why this car is actually a great buy.”

Now if the buyer rejects the car he will be considered unsophisticated and if he purchases, he will have to pay more than what he can afford. During this type of cognitive dissonance, most consumers end up buying the expensive car just to gain or protect that image of the sophisticated person.

The theory was first investigated by Leon Festinger in 1957, studying a cult that believed that the earth was going to be destroyed by a flood. Some people were so much committed to the cult that they sacrificed their personal comforts to save the earth but when the flood did not happen, they realized that they made a fool of themselves but justified their actions saying that the earth was not destroyed because of the faithfulness of the cult members.

There are different situations that can create mental conflicts that lead to cognitive dissonance.

“I didn’t want to do it, but I did it”. This sums up forced compliance behavior. I’m sure a lot of you have experienced a situation where you are forced to do something that is against your own beliefs due to work pressure or external expectations often for school or social situations.

Forced compliance behavior helps a person avoid adverse situations like getting fired from the job or public humiliation or embarrassment.

You have to choose between two deals and both are equally profitable. What will be your choice? This is the common cause of cognitive dissonance. Be it buying clothes or cars or selecting the best job offer or anything –  making up your mind, especially when you are hit with two similar choices, always leads to feelings of discomfort.