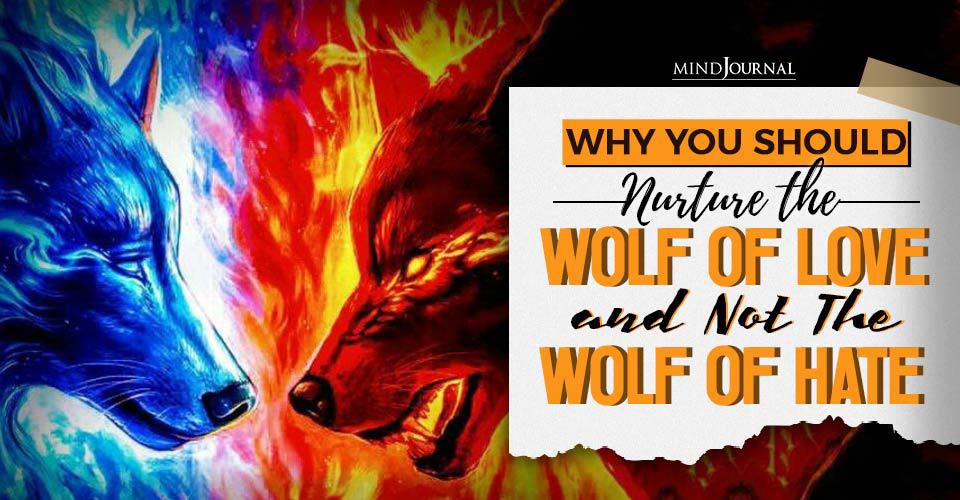 You can choose to nurture the wolf of love by practicing compassion or let the wolf of hate control you and your actions. The choice is yours!

Which wolf do you feed?

Nurture the wolf of love.

I once heard a teaching story in which an elder, a grandmother, was asked what she had done to become so happy, so wise, so loved, and respected. She replied: “It’s because I know that there are two wolves in my heart, a wolf of love and a wolf of hate. And I know that everything depends on which one I feed each day.”

This story always gives me shivers when I think of it. Who among us does not have both a wolf of love and a wolf of hate in their heart?

I know I do, including the wolf of hate, which shows up in small ways as well as large ones, such as when I get judgmental, irritable, pushy, or argumentative. Even if it’s only inside my own mind — and sometimes it definitely leaks out.

We’ve got these two wolves because we evolved them. Both wolves were needed to keep our ancestors alive.

Until just 10,000 years ago, for millions of years, primates, hominids, and early humans lived in hunter-gatherer groups that bred mainly within the band while competing intensely with other bands for scarce resources. Therefore, genes got passed on that promoted better cooperation inside a band and better aggression between bands. The wolf of love and the wolf of hate are stitched into human DNA.

Bands kept their distance from each other, and when they met, they often fought. For example, researchers have found that about 12 to 15 percent of hunter-gatherer men died in conflicts between bands — compared to “just” the 1 percent of men who died in the many bloody wars of the 20th century.

So it’s natural to fear the stranger — who, back in the Stone Age with no police around, was often a lethal threat. The related impulse to dehumanize and attack “them” also worked well (in terms of passing on genes) for millions of years.

Related: 7 Simple Strategies to Increasing Mindfulness in as Little as 30 Seconds

Today, you can observe the wolf of hate all around us, in acts of thought, word, and deed. For example, as soon as we see others as “not my tribe,” whether it’s at home or work or on the evening news, the wolf of hate lifts its head and looks around for danger. And then if we feel at all threatened or mistreated or desperate, the wolf of hate jumps up and looks for someone to howl at or bite.

While the wolf of hate was vital back in the Serengeti, today it breeds alienation and anger, ulcers and heart disease, and conflicts with others at home and work.

And at a larger scale, with 7 billion people crowded together on this planet — when a flu mutation in Hong Kong can become a worldwide epidemic, when bank problems in Greece roil the global economy, when carbon emissions in one country heat up the whole world — when we fear or dehumanize or attack “them,” it usually comes back to harm “us.”

Related: Shadow Work: How to Let Your Inner Demons Guide You

Rick Hanson, Ph.D., is a psychologist, Senior Fellow of the Greater Good Science Center at UC Berkeley, and New York Times best-selling author. His books have been published in 30 languages and include Neurodharma, Resilient, Hardwiring Happiness, Buddha’s Brain, Just One Thing, and Mother Nurture – with 900,000 copies in English alone. He’s lectured at NASA, Google, Oxford, and Harvard, and taught in meditation centers worldwide. An expert on positive neuroplasticity, his work has been featured on the BBC, CBS, NPR, and other major media. He began meditating in 1974 and is the founder of the Wellspring Institute for Neuroscience and Contemplative Wisdom. He loves wilderness and taking a break from emails.View Author posts