Shadow Work: How to Let Your Inner Demons Guide You 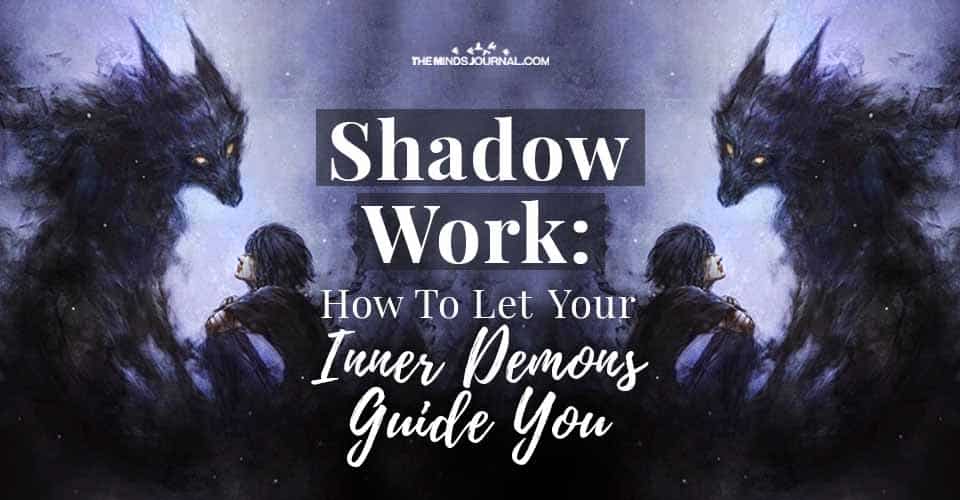 How is Our Shadow Side Formed?

Your Shadow side is formed in childhood and is both (a) a product of natural ego development, and (b) a product of conditioning or socialization. Socialization is the process of learning to behave in a way that is acceptable to society.

When we are born, we are are all full of potential, with the ability to survive and develop in a variety of ways. As time goes on, we learn more and more to become a certain type of person. Slowly, due to our circumstances and preferences, we begin to adopt certain character traits and reject others. For example, if we are born into a family that shows little interpersonal warmth, we will develop personality traits that make us self-sufficient and perhaps standoffish or mind-oriented. If we are born into a family that rewards compliance and shuns rebellion, we will learn that being submissive works, and thus adopt that as part of our ego structure.

But, as we develop our ego-personality, we also do something else at the same time. What has happened to all those parts of our original potential that we didn’t develop? They won’t just cease to exist: they will still be there, as potential or as partly developed, then rejected, personality attributes, and they will live on in the unconscious as an alternative to the waking ego. So, by the very act of creating a specifically delineated ego-personality, we have also created its opposite in the unconscious. This is the shadow. Everyone has one.

As we can see, developing the Shadow Self is a natural part of development.

But you also formed an alter ego due to social conditioning, i.e. your parents, family members, teachers, friends, and society at large all contributed to your Shadow.

Well here’s the thing: polite society operates under certain rules. In other words, certain behaviors and characteristics are approved of, while others are shunned. Take anger for example. Anger is an emotion that is commonly punished while growing up. Throwing tantrums, swearing, and destroying things was frowned upon by our parents and teachers. Therefore, many of us learned that expressing anger was not “OK.” Instead of being taught healthy ways to express our anger, we were punished sometimes physically (with smacks or being grounded), and often emotionally (withdrawal of love and affection).

There are countless behaviors, emotions, and beliefs that are rejected in society, and thus, are rejected by ourselves. In order to fit in, be accepted, approved, and loved, we learned to act a certain way. We adopted a role that would ensure our mental, emotional, and physical survival. But at the same time, wearing a mask has consequences. What happened to all the authentic, wild, socially taboo or challenging parts of ourselves? They were trapped in the Shadow.

What happens as we grow up?

Through time, we learn to both enjoy, and despise, our socially-approved egos because, on the one hand, they make us feel good and “lovable,” but on the other hand, they feel phony and inhibited.

Therapist Steve Wolf has a perfect analogy that describes this process:

Each of us is like Dorian Grey. We seek to present a beautiful, innocent face to the world; a kind, courteous demeanor; a youthful, intelligent image. And so, unknowingly but inevitably, we push away those qualities that do not fit the image, that does not enhance our self-esteem and makes us stand proud but, instead, brings us shame and makes us feel small. We shove into the dark cavern of the unconscious those feelings that make us uneasy — hatred, rage, jealousy, greed, competition, lust, shame — and those behaviors that are deemed wrong by the culture — addiction, laziness, aggression, dependency — thereby creating what could be called shadow content. Like Dorian’s painting, these qualities ultimately take on a life of their own, forming an invisible twin that lives just behind our life, or just beside it …

But while the Shadow Self may be portrayed as our “evil twin,” it is not entirely full of “bad” stuff. There is actually gold to be found within the Shadow.

What is the Golden Shadow?

Jung once states that “the shadow is ninety percent pure gold.” What this means is that there are many beautiful gifts offered to us by our Shadow side if we take the time to look. For example, so much of our creative potential is submerged within our darkness because we were taught when little to reject it.

Not everything within our Shadow is doom and gloom. In fact, the Shadow contains some of our most powerful gifts and talents, such as our artistic, sexual, competitive, innovative, and even intuitive aptitudes.

The ‘Golden Shadow’ also presents us with the opportunity for tremendous psychological and spiritual growth. By doing Shadow Work, we learn that every single emotion and wound that we possess has a gift to share with us. Even the most obnoxious, “ugly,” or shameful parts of ourselves provide a path back to Oneness. Such is the power of the Shadow – it is both a terrifying journey, but is ultimately a path to Enlightenment or Illumination. Every spiritual path needs Shadow Work in order to prevent the issues from happening that we’ll explore next.

What Happens When You Reject Your Shadow?

When shadow-work is neglected, the soul feels dry, brittle, like an empty vessel. — S. Wolf

Rejecting, suppressing, denying, or disowning your Shadow, whether consciously or unconsciously, is a dangerous thing. The thing about the Shadow Self is that it seems to be known. It yearns to be understood, explored, and integrated. It craves to be held in awareness. The longer the Shadow stays buried and locked in its jail cell deep within the unconscious, the more it will find opportunities to make you aware of its existence.

Both religion and modern spirituality have a tendency to focus on the “love and light” aspects of spiritual growth to their own doom. This over-emphasis on the fluffy, transcendental, and feel-good elements of spiritual progression results in shallowness and phobia of whatever is too real, earthy, or dark.

Spiritually bypassing one’s inner darkness results in a whole range of serious issues. Some of the most common and reoccurring Shadow issues that appear in the spiritual/religious community include pedophilia among priests, financial manipulation of followers among gurus, and of course, megalomania, narcissism, and God complexes among spiritual teachers.