The Damaging Effects Of Negativity On Your Health 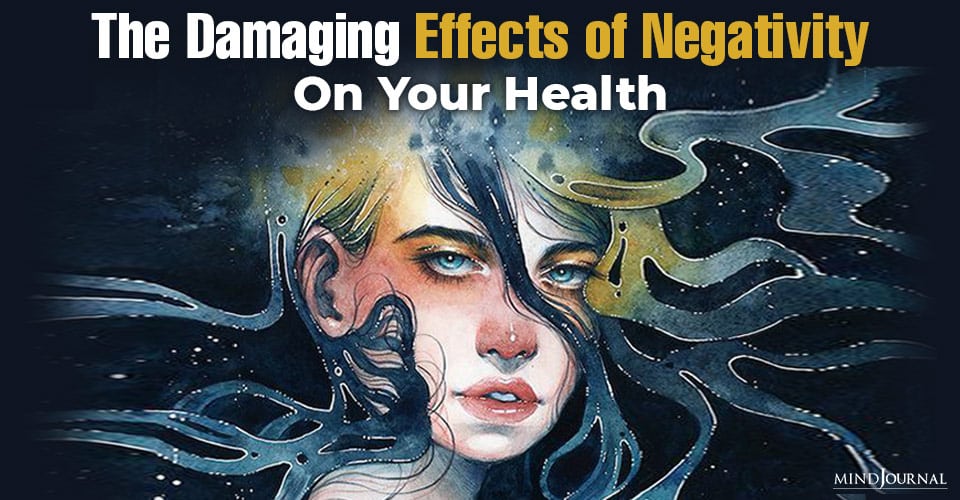 “If you think bad thoughts, then you’ll jinx it”…“If you think the worst, then you’ll make it happen.” We grew up hearing these words from our friends and folks. Clinicians have named such negative thinking as “nocebo effect” and claims there are damaging effects of negativity on health.

A nocebo effect is said to occur when negative expectations of the patient regarding a treatment cause the treatment to have a more negative effect than it otherwise would have. Negative thoughts regarding any aspect of your life can do a lot of damage to your physical and mental health.

As per law of attraction, negative thinking attracts negative situations and experiences in your life, which takes a toll on our health.

Negative attitudes, thoughts and feelings lead to chronic stress that can disturb the body’s hormone balance, and depletes the brain chemicals required for happiness, and damages the immune system.

We need to be extra cautious and keep a check on our negative thoughts and emotions and be aware of the effect they have on us. Here are three different types of negative behavior and effects of negativity on health:

When we meet an adverse situation, we tend to incline towards cynicism, which is a part of a defensive posture we take to protect ourselves. It is triggered when we are hurt or angry at something. Eventually, we indulge in self-righteous attitudes and form expectations that people should behave a certain way.

Negative cynicism gives rise to a shadowy perspective, so you will focus only on worst in the people. People who faced a lot of negative experiences in life have high levels of cynical distrust, which is defined as the belief that others are mainly motivated by selfish concerns.

According to an online issue published in the medical journal of the American Academy of Neurology, a high level of negative cynicism or cynical distrust increases the risk of dementia and other problems such as heart diseases.

In a study, published on Psychiatric News, individuals with cynical personality were found with five times higher risk of developing depression than those who did not express cynicism.

So, if you are cynical, you may be hurting your brain health.

Hostility is an emotionally charged aggressive behaviour. A hostile personality holds negative beliefs and attributions concerning others. And the causes may include

According to a study published in the Journal of Racial and Ethnic Health Disparities, individuals who had a more hostile attitude were more likely to be affected by depressive symptoms. Hostility is also a better predictor of coronary heart disease (CHD) in older men than other factors like smoking, high levels of LDL cholesterol, and high-calorie intake.

Anger can be a normal emotion but can be problematic when it becomes a permanent disposition or even a habitual outlook for the entire worldview in individuals. Chronic anger is an on-going proneness to become angry as well as a general attitude of hostility.

Unlike other forms of anger, feelings of chronic anger tend to be prolonged and doesn’t subside with time.