How To Manage Your Anger And Never Let It Control You: 7 Tips 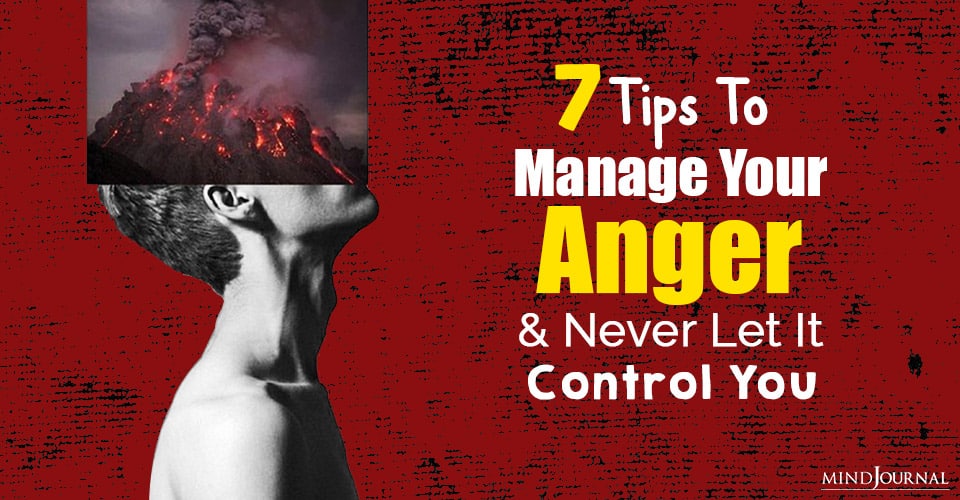 Do you consider yourself a short-tempered person? Do you find yourself trying to manage your anger more often than you would like?
“Anger is an acid that can do more harm to the vessel in which it is stored than to anything on which it is poured.” – Mark Twain

Sitting in my car for 45 minutes on a Monday morning in bumper-to-bumper traffic for a drive that should have taken 5 minutes was my breaking point. I sat there thinking, “I hate my life right now.” It was a disastrous morning. Everything that could have gone wrong did. My daughter was up all night teething, my toilet overflowed and flooded my bathroom, and my dog came in from outside and destroyed my floor with his mud and poop-covered paws. At that point, I could have snapped at Mickey Mouse. I looked at the car to the right of me trying to cut me off and thought, “Go ahead and try it, man.” My middle finger was ready to go.

All my training, meditation practice, and efforts to be rational disappeared; my centered self was nowhere to be found. As the anger coursed through my veins, it happened: I went from being a rational person to being totally insane.

Anger can do that. It can make the calmest person look like the Hulk on steroids. When an emotion that powerful rages through your body, it’s easy to lose yourself, your values, and everything you stand for.

The rational and humble part of me understands that the things I was experiencing that morning could have been a lot worse. However, the pile of annoyances, coupled with my lack of sleep created the perfect recipe for me to lose it. I was Dorothy in Oz, confused about what reality I was in, wanting to get back to my world, but not knowing the way.

When anger boils in your blood, it’s easy to get swept away from your reality. It wasn’t until I closed my eyes, took a deep breath, and clicked my heels together that I was able to find my way to life and myself again.

Read Buddha And The Angry Man, A Story That Will Change Your Perspective On Anger

As most of you probably already know, anger can push us to think and say crazy things. We actually believe we make sense when, in reality, we’re completely irrational. Like a drunk person who doesn’t know when it’s time to stop, anger hinders your judgment and makes you unaware of what’s going on.

That’s because when you’re angry, you’re under the influence of strong chemicals. The amygdala, the part of your brain that initially triggers anger, is one of the most primitive parts of the brain. After your amygdala alerts your body that you’re angry, your adrenal gland kicks into action. Adrenaline is a chemical that increases your heart rate, forcing body contractions and blood flow to your brain and muscles.

Your body then starts producing more testosterone, a chemical that kicks your aggression into a higher gear. When your body reacts to your rage, it ramps up the intensity by making you even more manic.

This is why anger can make you say and do crazy things that don’t reflect the truth of who you really are. Contrary to what people think, anger doesn’t make you speak the truth. It makes you speak from the most primitive part of yourself. Basically, you may get a more rational conversation from a four-year-old than from an angry person.

I know a lot about anger and its consequences, I ran an anger management group for convicted felons. Yes, you read that correctly, little me ran a group for a group of people who had been arrested at one point because of their anger. It wasn’t my favorite job—everyone in the group always seemed so mad about something—but I learned a lot in the process.

Dr. Ilene S. Cohen, Ph.D. is a psychotherapist, professor, and blogger. She is also the author of the popular self-help guide, When It’s Never About You, as well as co-author (with Rabbi Aryeh Weinstein) of It’s Within You. She’s a regular contributor to Psychology Today, and her work has appeared in Psych Central and Tiny Buddha, along with many other online publications. After graduating from the University of Tampa with a B.A. in Psychology, Dr. Ilene obtained her Master’s and Ph.D. degrees in Marriage and Family Therapy from Nova Southeastern University. Both her books and her practice are fueled by her passion for helping people achieve their goals, build a strong sense of self, and lead meaningful lives. She is also guided by a passion for service and lends her time to multiple charitable causes around the world. Dr. Ilene resides in Miami, Florida with her husband and two young daughters.View Author posts