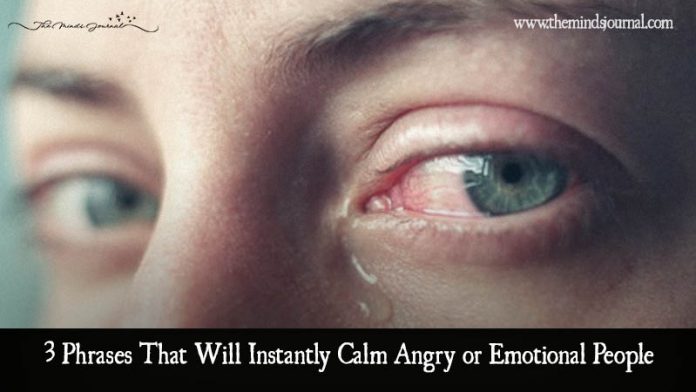 3 Phrases That Will Instantly Calm Angry or Emotional People

The emotion that can break your heart is sometimes the very one that heals it.
― Nicholas Sparks, At First Sight

We all know, some people spend much of their lives over-agitated or spoiling for a fight, and even the most level-headed of us sometimes let our emotions get the best of us.

Being more emotional than most people are, doesn’t mean you cry at the drop of a hat, or is emotionally labile. Instead, it means that you perceive and feel things more sensitively and deeply. Not only that, you respond to your emotions more often than not.

But emotional regulation is an important tool for social interaction. There might be circumstances in which you would require to manage and modify your emotional expression according to the demand of the situation. These will not only help you interact with others in a more matured manner but also will save you a lot of embarrassments.

For example, even if you feel like, you cannot yell at an angry boss. In situations akin to this, being able to compose oneself instead of impulsively reacting to the situation is necessary.

The piece features an interview with Dr. Albert J. Bernstein, a clinical psychologist who, while treating the truly psychotic, perfected his techniques for bringing out-of-control conversations back down to Earth.

His advice includes tips like, “If you feel like a preschool teacher, you’re probably doing it right,” and suggestions for soothing outraged folks on the phone, as well as these phrases to help turn down the emotional dial on your most challenging conversations.

These 3 phrases might instantly help calm down an angry or emotional person:

The problem may not be that they’re speaking too quickly; the problem may be they’re screaming their head off or sobbing uncontrollably. Nonetheless, this phrase can work its magic, according to Bernstein.

“Why does this work? It breaks the pattern in their head,” the post explains.

“They’re expecting you to resist them but you’re not. You’re asking them to clarify. You’re interested. This makes them shift more out of ‘dinosaur brain’ and into thinking. And that’s good.”

This one works almost on similar principles to phrase number one.

It knocks the over-emotional person out of using their “dinosaur brain”—the primitive, emotional part that only knows flight or fight— and kick starts them to think more rationally and logically.

3. Any Question at All

It doesn’t matter how instable the other person is being at that moment; if you want to get the conversation back on any sort of sane track, telling them they’re insane or explaining how your viewpoint is more sensible isn’t going to help.

Why? “Explaining is almost always a disguised form of fighting back,” says Bernstein. The other party will sense that and just get more aggressive and emotional.

So even if they’re raving that they’re Elvis back from the dead, you’re better off asking where they’ve stashed their sequined jumpsuit than you are explaining that, in truth, they appear to be an extremely unwell psychiatric patient.

“The act of listening is reflecting back the person’s emotional state, not necessarily the content of what they’re saying,” according to Bernstein, and doing that by asking relevant questions is more likely to calm people down and lead the conversation onto firmer ground than any attempt to inject level-headed good sense. 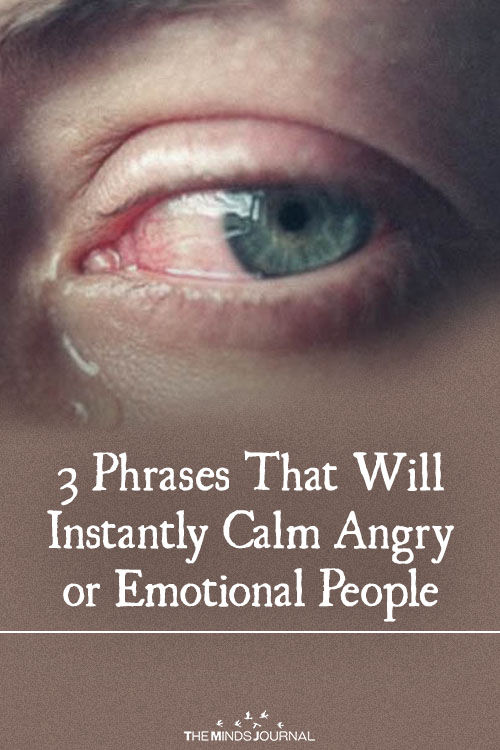 Kate Harrington
An ambivert by nature, I enjoy the best of both the worlds. I am quite a philosophical and sensitive person, who is still searching for her purpose in life, with the hope of finding it soon.
-Adverts-

Do you think your drunk self is different from your real self?
Read more
wpDiscuz
11
0
Would love your thoughts, please comment.x
()
x
| Reply