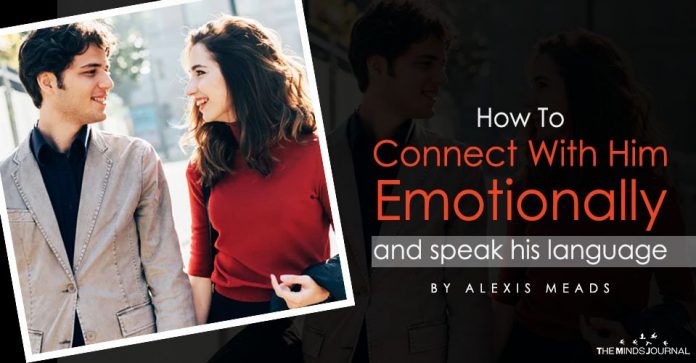 How To Connect With A Man Emotionally And Speak His Language

Men really do want to connect with a woman emotionally; the challenge is that they just do it differently than women do.

Men and women speak a different emotional language based on how their brain’s work and it’s important to understand cues. If you know how a man prefers to communicate and connect, you’ll save yourself a lot of hurt and frustration.

That’s why I wanted to write about how to connect with a man on an emotional level and speak his language.

My husband has often talked about what he calls “action speak”. This is why fathers often play catch with their sons, and it’s usually the best moments they have together!

Men prefer to connect emotionally while doing something with you, rather than sitting down for a talk. This could be going for a walk together, being in the car on a drive, or even while cooking side by side. This way an emotional conversation feels less like a confrontation, and more like an activity. So next time you want to connect heart to heart with your man, do it casually while enjoying another activity together.

The other way that men and women connect differently on an emotional level is how they process things. Women will often want to talk it through until there’s a resolution of some kind. Men, on the other hand, can need space and time out to think it through.

Often when this happens, women interpret it as a blow off and get more clingy, rather than realizing he may need some time or space to process his emotions. They are not necessarily running from you, they are giving their brain time and space to figure it out.

I know with my husband when we got into a few major arguments towards the beginning of our relationship, he would even go in another room, saying he needed space to let off some steam. It would take every fiber of my being not to run in there after him, crying in hopes that he’d connect with me again, or angrily demanding answers. However, I’d make myself go for a short walk instead, and by the time I got back, we’d be able to talk it through.

3. To connect with a man on an emotional level, you must encourage him.

Finally, when a man is opening up and engaging with you on an emotional level, make sure you are very reaffirming. Going into emotional territory can be scary for guys, so encourage them with simple body language like nodding, smiling, or “Ahh” and “mm-hmm”. Your reaction will make all the difference for him to either continue opening up or shutting down.

One of the most frequent questions I get asked from my clients who are in relationships is how to better communicate with their partner. I always remind them not to reward for “good” behavior rather than punishing for “bad” behavior.

If, for example, it bothers you that your guy often leaves his dishes in the sink and every time he does you generalize saying “You’re being so lazy, I always have to do your dishes.” He’s probably going to shut down. On the other hand, if in the off chance you notice he’d loading them into the dishwasher, make a big deal about it. Tell him how much you appreciate it and while it may seem like a simple thing, how much it means to you.

If you’re with a man who doesn’t respond to any of these things, there’s a chance he may be emotionally unavailable.

If that’s the case, I know how heartbreaking and frustrating it can be. He’s not wired to communicate like you are. He’s not programmed to do all the overthinking and soul-searching that you do, and he doesn’t necessarily know and understand himself in the way that you do.

He’s been told his whole life that all he has to do is be strong and tough. So he doesn’t necessarily know what to do when you cry or when you start telling him about your feelings. These emotions may make him so uncomfortable that all he knows how to do is to run or to shut down.

Alexis Meadshttps://alexismeads.com
Alexis Meads is a Harvard educated Professional Life and Dating Coach who specializes in helping women to find love and date with intention. She has worked with hundreds of clients from around the world since 2012, coached Tony Robbins clients, and been featured on MariaShriver.com, Huffington Post, KATU News and more. Like this article? Get her FREE gift at www.alexismeads.com/gift
-Adverts-