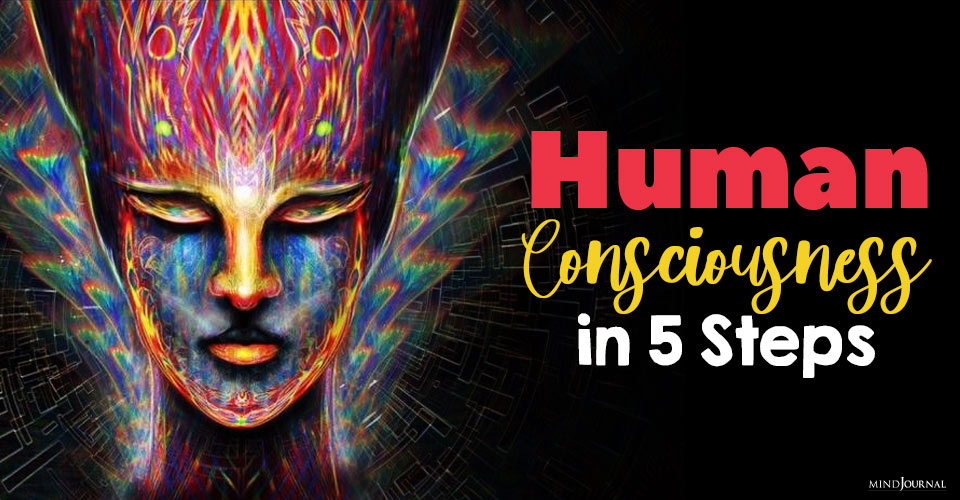 Consciousness is someone’s state of awareness. Human consciousness evolves at different levels. These levels of consciousness help an individual to experience their “internal states.”

Mapping the evolution of human consciousness in five steps. From the vantage point of the Unified Theory Of Knowledge (UTOK), we can frame the root of many modern philosophical confusions via the “Enlightenment Gap.”

This refers to the fact that the Enlightenment failed to produce a coherent framework for understanding the relationships between (a) matter and mind and (b) social and scientific knowledge.

What is Human Consciousness?

That is, we are attempting to describe what consciousness is from the vantage point of modern science, with an emphasis on the key evolutionary steps that make up human consciousness.

[Note that although there are some powerful anecdotes and interesting lines of research and argumentation that claim consciousness is primary in the cosmos, this position has significant metaphysical difficulties that render it problematic.

The UTOK adopts the more conservative and established position that subjective conscious experience is mediated by neurocognitive processes and thus requires a brain.]

The UTOK starts with the “Tree of Knowledge System” as a new map of Big History that divides the ontic reality into four different planes of existence or dimensions of behavioral complexity that are labeled: 1) Matter-Object; 2) Life-Organism; 3) Mind-Animal; 4) Culture-Person.

Instead, as the philosopher Lawrence Cahoone cogently argues in The Orders of Nature, the Enlightenment philosophers created a malformed “bipolar” split between matter and mind.

As his work makes clear, it is time for a systemic, metaphysical upgrade in our understanding of the dimensions in nature in a way that allows for the proper frame of understanding for the relations between matter and mind.

According to the UTOK, there is nothing properly called “conscious” at the Matter level of existence. Electrons, rocks, rivers, and the sun do not have “bits” of consciousness in them. There is, however, an important difference between the object and its position in the world relative to the field of physical information it is in.

When framed this way, there are some analogies to be made between the position of an entity, the information it has contact with, and the field it is in. As such, there may be some value to be had in thinking in “panpsychic” terms.

Read 3 Transformational Processes Within The Evolution of Consciousness

Life is a different plane of existence, and living creatures like bacteria, fungi, and trees exhibit consciousness in a weak sense of the term. This is because, unlike electrons and rocks, they are autopoietic and exhibit functional awareness and responsiveness to their environment.

This, however, is not the primary referent for consciousness in the UTOK metapsychology. Rather, functional awareness and responsivity can be defined purely from the third-person, exterior epistemological position.

Put simply, we can scientifically demonstrate that cells, fungi, and trees exhibit intelligent behavior defined in terms of functional awareness and response.

However, doing so does not mean that trees subjectively feel things in the same way that a dog or a human subjectively feels things. To reference Nagel, there is a good argument for believing that there is nothing that it is like to be a tree.