How to Focus on Relationships in the Age of Distraction 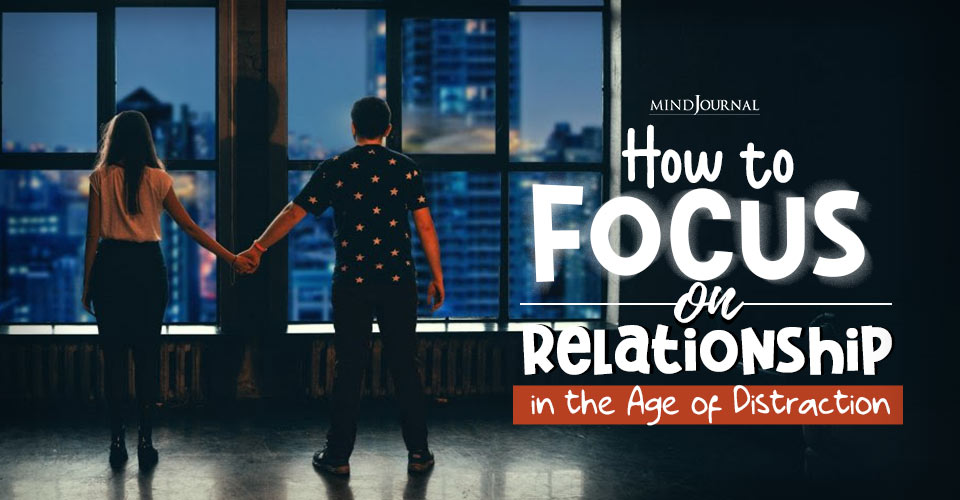 In a world full of distractions, focusing on interpersonal relationships can seem daunting. Here’s how to focus on relationships and create unbreakable bonds. Continue reading to learn more!

This is part nine of a nine-part series published over nine consecutive weeks.

Here’s How To Focus On Relationships In A Distracted World

The cognitive psychologist Daniel Willingham notes, “One of the most stubborn, persistent [aspects] of the mind is that when you do two things at once, you don’t do either one as well as when you do them one at a time.” It is for this reason that multitasking has been found to be a poor use of time.

To Multitask Is To Do No Task Well

In fact, research has uncovered that attempting to do two tasks at once takes longer than performing them one at a time, burns more cognitive energy, and hence wears down the brain more—which causes more stress and produces more mistakes.

Perhaps for this reason, a study conducted by the late Stanford communication professor Clifford Nass and his colleagues found that adult media multitaskers exposed to multiple streams of electronic information simultaneously do not remember facts or solve problems very well.

Why? They become unable to prevent irrelevant information from surfacing in their minds. In other words, they become so highly distracted that they cannot concentrate effectively on what’s most important, leading “to the surprising result that heavy media multitaskers performed worse on a test of task-switching ability.”

Not As Popular As You Think

A civil engineer from Colombo, Sri Lanka, who came to one of my conferences, Chamath was surprised that the pace of communication slowed down once he started checking his phone only twice per day.

“I’m not as in demand as I thought I was,” Chamath shared. “I realize how little people care if I take ten to twelve hours to get back to them.”

The Online Entry Point (OEP; it refers to the only times you go online each day) model is humbling. Before you use it, you think you’re so sought after, with so many people texting and emailing you. Once you try this model, however, you quickly realize that so few people actually call you.

We’re not as important as we think we are. It’s really sobering—a wake-up call to our true popularity.

A study of Facebook found that although the average person has about 150 “friends,” they only actually communicate in a given month with a few; many Facebook users only communicate with one or two.

Henry, a software engineer who attended one of my leadership conferences in Washington, DC, shares: “Since I started checking text messages only twice per day, I’ve discovered that most of those messages were from my wife. She would send me these quick messages such as ‘Hey, can we meet you at three at the park with the kids?’ ‘Can you pick up the kids at eleven?’ or ‘I was thinking of buying this coffee table on Amazon. What do you think?’

“When I told her about my new twice-daily text regimen, she said, ‘Okay. Well, I guess I’ll just call you instead of sending you text messages.’ That’s already reduced my text traffic by about sixty percent.”

Since most of us communicate regularly with only a few people, we can just tell them about our new Digital Limiting Strategy.