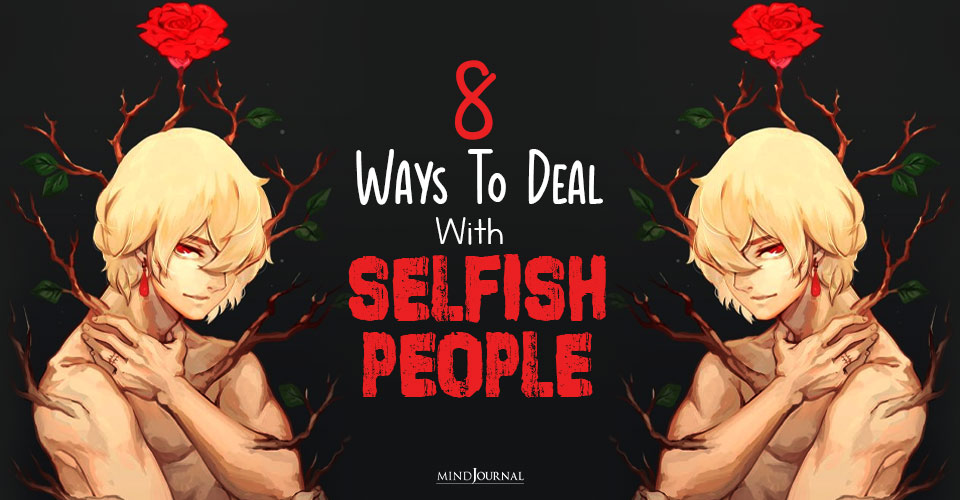 Everyone is selfish to some extent because sometimes you just have to be. You need a little bit of self-love, self-care, and self-importance in your life, otherwise, people will just keep on exploiting you and hurting you. But what about those people who are nothing but selfish? Who only think about themselves, even at the cost of others? How to deal with selfish people like that?

There’s a thin line between being self-assured and narcissistic, and never think that it’s the same thing. People who are selfish will try to make you believe that they are better than you, their needs are more important than yours, and that the world revolves around them. It can be very annoying, but you can deal with them.

Dealing with selfish people can be exhausting, but once you know how to deal with selfishness, you’ll see it’s really not that hard.

Related: Wetiko: The Virus of Egoism and Selfishness According to Native Americans

How To Deal With Selfish People: 8 Ways To Handle Self-Centered People

1. Don’t take them too personally.

When you are dealing with a self centered person, you need to understand that no matter how hard you try to make them understand something, they will never see where you’re coming from. They will continue to only care about their own needs, wants, and demands and will not spare a thought to you and what you want.

So why waste your time and energy on people like that? Whatever they say to you, let it go and try not to dwell on it. Protect your own mental peace, happiness, and sanity by not taking what they say and do personally. Don’t give them the attention and importance they don’t deserve.

2. Make them realize that they are not the center of the Universe.

People who are selfish are always very caught up in their own worlds, so it’s important to remind them sometimes that they are not the center of the world, and the world doesn’t revolve around them. When you are dealing with selfish people, you will quickly realize that they never spare a thought to others, and only care about their own lives.

Reminding them now and again about their inflated sense of self-importance is irrelevant in the grand scope of things might help them be more humble and down-to-earth. Show them their place and call them out on their selfishness without making them feel like you’re attacking them, instead behave in a very dignified and respectful manner. This way, they probably won’t feel the need to get into an ugly war of words with you.

3. Spend time with people who are not self-centered.

If you are dating an emotionally selfish person, or you have a close friend like that, then maybe it’s a good idea for you to maintain some distance from them and seek out better people to spend time with. When you think about how to deal with selfish people, one of the best things you can do is stay away from them and their negativity.

Related: 9 Signs Someone is Selfish

4. Don’t give them the attention they are so desperate for.

When it comes to dealing with selfishness, this is one of the most powerful and best things you can do. The moment you stop giving them your attention and energy, either they will back off or they will try to change their ways. Throw non-committal, monosyllabic, and disinterested replies and statements at them, and just see how they react. It will completely throw them off their game, and they just won’t know what to do.