9 Signs Someone is Selfish 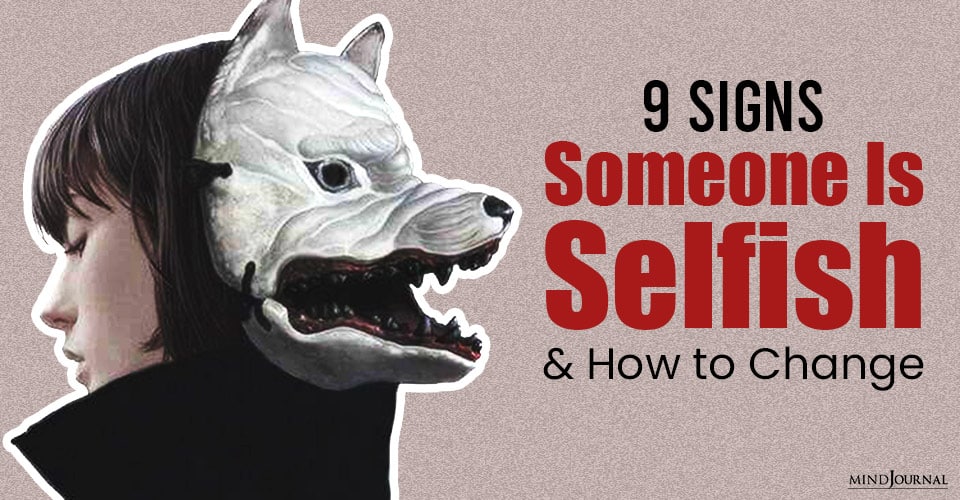 Some people say being selfish is necessary. We are all selfish to a certain extent. However, sometimes we tend to be selfish without even realizing it. Most people become so drunk with the idea that being one with themselves and being selfish to take care of themselves is a form of self love, that they forget how important it is to pay attention to where they are going wrong.

The meaning of “selfish” is a person who is consumed or excessively concerned about oneself. Selfishness is a learned behavior that is reinforced with time. Humans are generally programmed to look out for themselves. Some people become selfish as a measure to sustain themselves. However, it is important to understand that there is a huge difference between looking out for oneself and being selfish. Human beings are naturally selfish since it tends to become a need to survive. It is important to redefine selfishness and balance the needs of oneself and the society they live in.

So here are some signs someone is selfish without even realizing it:

1. They never have a flexible routine

Being single, they may be super attached to their routine and that is why they refuse to make changes whether it’s their closest friends or anyone they are close to. If he or she has been single for a while, they are used to calling all the shots personally as well as professionally. Of course, it feels good to not make changes to routines they worked so hard to achieve. But by not making time for friends or close ones can be detrimental to them. It is important to be social while sticking to personal routines.

On the other hand, if they do make time for a date or friends and it gets cancelled for some reason they tend to freak. That’s definitely not a great sign. Sometimes a meeting can get cancelled or a potential date needs to be rescheduled because he or she got stuck at work. There is nothing to do about it. Being flexible sometimes is an important part of not being selfish.

2. They are a control freak

They want to control every aspect of their life, whether personal or professional. Being an absolute perfectionist at the office they tend to get very upset when someone at work makes a mistake or doesn’t do things their way. When friends make decisions that don’t agree with their thoughts, they get annoyed. That’s not being smart, that’s just being a crazy control freak. She make the rules and want the guys you date to play by them or he’s out. It is one thing to be confident and sure of what one wants, it’s another to just be a control freak. If they are controlling every aspect of their life, then there is no doubt that it’s a sign they are selfish.

3. They have too many habits

Their habits are pretty straight forward…Friday nights are for Netflix and popcorn. Sundays are self-care days and pampering themselves and they don’t want anyone to mess with it. They refuse to get out of their comfort zone to try out different things or go on brunch dates on a Sunday afternoon with friends. The point is, if they never let go of the habits, they will not know where true happiness lies. It’s absolutely normal to have habits, good or bad but the world shouldn’t run around them. If they are too consumed with their habits, they probably are a selfish person.

4. They complain all the time

Do they complain all the time? Do they tend to complain about how their work drives them crazy or not being able to afford a vacation or someone screwed up their hair at the salon? If in fact, that’s the case, then they are a selfish person. It’s absolutely ridiculous to expect someone to listen to their constant nagging about how things aren’t working out the way they want them to or how upset they are with their life. They are absolutely not being a good friend if they don’t see things from others point of view. It can happen that the friends have their own things to deal with and if the individual is always whining instead of having fun, then they are just taking advantage of them. Of course, it’s normal to share things with them but not 24/7. Grow the hell up and learn to deal with things without nagging!

5. They do what they want… always

They always do what you want whether they are single or in a relationship…and why not? It just feels good to be free and be able to do whatever. But while doing so, they end up acting like a diva. If this sounds like them, then they are a selfish person. If they continue with this behavior, they will end up losing friends and important relationships and they won’t even realize why. It will probably be because their friends got tired of how self-centered they are. The point is no matter what happens they will still think that they love themselves and there is no saving anyone from that.