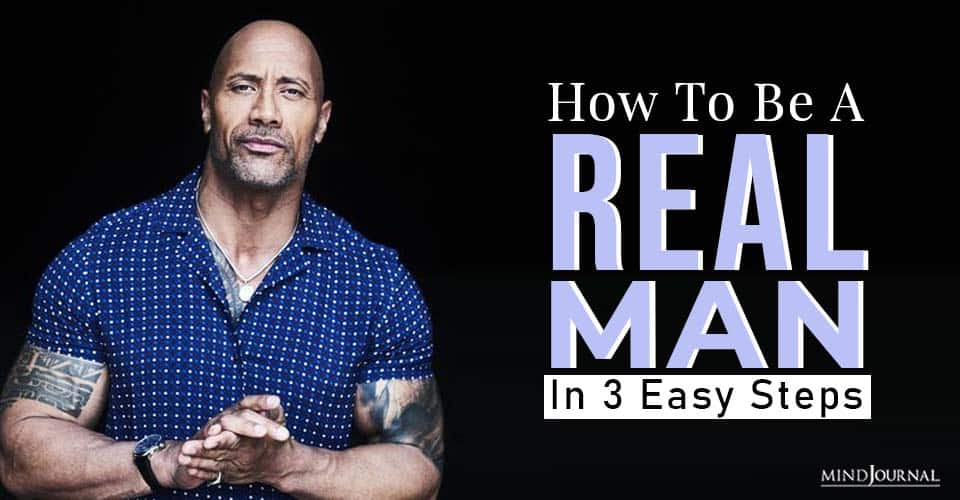 Society has set certain rules for being a ‘real man’ and he must live by those rules to be perceived as one by the opposite gender and his peers. But what really defines a real man?

I remember wondering endlessly if I was gay as a young boy.

Why? Because I consistently got the feedback from my male peers that I wasn’t a traditional male.

As my male friends played basketball to impress the girls in our class, I sat on the sidelines and ‘gossiped’ with my female classmates.

While my guy friends played rugby, I was in musicals.

While my guy friends wanted to get off the phone after 90 seconds of problem-solving conversation, I would routinely spend hours at a time on the phone with my female friends.

Read If Your Guy Does These 16 Things, Congrats! You Found A Real Man

And strangely enough, through all of my teen years through to mid-’20s being a sensitive and seemingly feminine guy, I had always had a girlfriend. It was the cognitive dissonance of the highest degree. I thought to myself “I’m so NOT a manly man. How can girls still be interested in me romantically?”

While I have always been more sensitive and intuitive than most of my friends, it took me almost two decades to realize that being sensitive had nothing to do with femininity. And if it does by some people’s definitions of the word feminine for them, then hey, great… I’ll accept that too.

So what if, as a man, you decided on your own personal ideals of masculinity and you lived your life according to your values and not some regurgitated bullshit that you read off of a Buzzfeed article?

To opt-out of the societally constructed version of masculinity and choose for yourself, it’s as easy as 1, 2, 3.

Here are three simple steps that will help you become a real man (at least in the eyes of the person whose opinion matters most… yours!).

1. Decide on your values.

Our values are our core beliefs and standards about what we expect and will tolerate in our lives.

What does this mean? Here are a few examples of my personal values in action.

A woman wants to start dating me but then I find out she’s a smoker. For me, cigarettes are a huge turnoff so I politely decline. My underlying value states that I will only spend my time with people who want the best for themselves and treat their bodies with respect.

A few months into starting this website, I had a few offers from people in the relationship industry who wanted to partner up with me on some video courses that would have made me exceptionally wealthy very quickly. The people making the offers had a track record of massive success, but they also had a history of shady ethics.

I would have been making six figures within a few months of launching a product with these individuals, but I would have been selling my soul to the highest bidder. I declined because my underlying values stated that I will only ever put out products that are marketed in ethical ways and that I truly believe help the world.