9 Signs You’re Dating a Real Man, Not a Boy 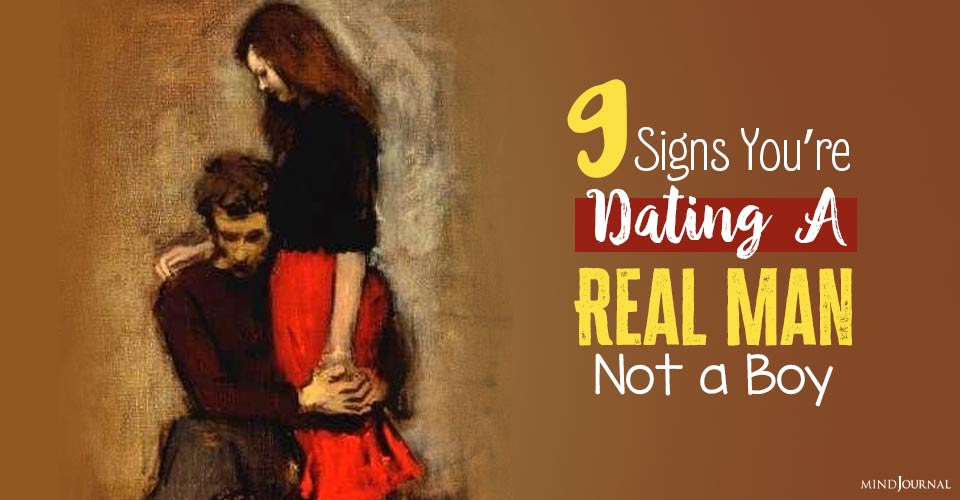 I was once a boy, now I’m a man. It took me twenty-nine years to get there, but I’ve arrived. It’s more than most men can say.

And that’s because age has nothing to do with being a man. Age is merely a number—actions define who he really is. But here’s the problem—most women spend their time trying to change boys into men.

If you’re dating a boy right now, it’s up to you to be a woman and move on with your life. A real man is someone who’s able to make decisions based on what he thinks is right, instead of what he feels like doing.

9 Signs You’re Dating a Real Man, Not a Boy

Even the best relationships have friction. You’re going to do or say something he doesn’t like—it’s inevitable. Boys are passive-aggressive, whereas a real man will have a productive conversation with you…even if it’s a little awkward.

2. Boys only want to hook up – men invest their time and energy in the right woman.

There’s a moment in every man’s life when he realizes that being in a relationship makes him significantly happier than chasing “tail” every night.

If you’re only hearing from him at 1 a.m. on a Saturday night, he’s not ready to give up his toys. Move on and find yourself a grown man.

3. Boys will compliment you to get in your pants – men pay compliments because they want you to feel great about yourself.

Related: 6 Signs Your Partner Wants You For Your Body, Not Your Heart

4. Boys live day by day – men work hard to build a future for themselves and their woman.

When you’re only focused on making yourself happy, you can party every night and be lazy every day. Once you realize that other people are relying on you, you’re willing to make the sacrifices you need to support your family.

5. Boys are intimidated by smart women – men are stimulated by them.

If he’s insecure about his own intellect, he won’t risk it with a smart girl. The boy will stay in his comfort zone, whereas a real man wants the challenge of a smart woman.

6. Boys make promises they can’t keep – men say it and mean it.

One of the biggest mistakes I’ve ever made was telling a woman I loved her when I didn’t mean it. I was a scared little boy trying to make a girl happy.

A real man will tell a woman how he feels when he feels it. And if it’s not there, he won’t make it up.

7. Boys avoid any chance of rejection – men face their fears and go for it.

Here’s the thing, both men and boys hate getting rejected—no matter who you are, rejection sucks.  The only difference is that a real man will push through his fears and go for it anyway because you’re worth it.

Related: Attention Men: The Right Type Of Chivalry For The 3 Types Of Women You Date

8. Boys don’t set priorities – a man realizes what’s most important and makes you a priority.

A real man wants to spend his time with the people he cares about. And if he’s dating you, he cares about you. He will want to be with you and only you.

9. Boys put you down – men encourage and support you

Scared little boys will try to drag a woman down with them as a defense mechanism. A real man understands that he will grow as a man if his woman is growing as a woman.

Want to know more about the signs you are dating a real man? Check this video out below!