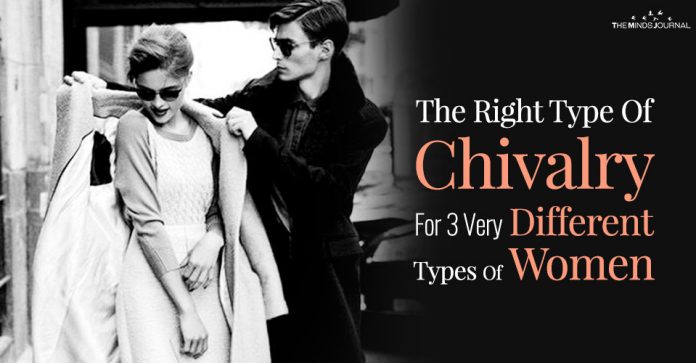 Win Her Heart: The Right Type Of Chivalry for The 3 Unique Types of Women

Should you open the car door, or not? Pull out her chair, or let her do it? Should you hand her coat? Even help her on with it? Guys, does it seem like for every woman who complains that you’re not being a gentleman, there’s another one equally insulted by your chivalrous gestures?

Women seem confusing. But to find love, you must follow dating advice, and pass through a number of first, second and third dates. And that’s where this whole gallantry stuff comes into play.

How much chivalry is enough? What is the bare minimum to please a woman and the absolute maximum to not insult her? The answer is simple: it depends on the woman.

Now, now, don’t worry, this isn’t some vague theoretical mumbo-jumbo. Take a deep breath because I’m going to happily break this down for you to make your dating experience effortless and painless.

First and foremost, you need to figure out what kind of woman this lady is whom you’re dating.
Second, before you hastily lump these women into some unflattering stereotypes, please understand that behind each stereotype is a human being (not unlike yourself) who has a very good reason for her preferences and tolerances and attractions. Once you understand her motivation, you have the key to winning her heart.

Despite people telling you that chivalry is dead, here’s how to dial-up (or dial down) chivalry to make each woman you date feel special. (That is the point of chivalry after all, right?)

This is the woman who expects chivalry. To you, she seems like an entitled spoiled brat sometimes, but really she’s just a woman with standards.

She grew up as “Daddy’s Little Girl” believing in Prince Charming and she dreams of a man who’ll treat her like a valued lady. Her parents raised her to measure a man by the way he treats her, so the kinder and more chivalrous you are, the more appealing you seem to her.

She does long for a knight in shining armor, so if that’s not your aim, don’t date her. But if being a woman’s hero is your thing, she’ll give you endless opportunities. Therefore, if you’re dating this type of woman, pick up a book on chivalry and read it cover-to-cover. Twice.

Don’t overlook one single detail of that book. If you want to light up her heart, do every single thing that book recommends: from pouring her coffee to hailing her a cab and carrying her dog.

If you wish to pursue a true relationship with “The Princess,” the one thing you want to withhold is excessive compliments about her appearance. She expects it (because it’s the pickup line every lame guy she’s ever known defaults to), and if you go on and on about her overwhelming hotness, you’ll come off as just another admirer.

On the other hand, if you engage her in a real conversation while treating her like royalty (i.e., ask her about her hobbies, books she’s read, her favorite place to travel), you’ll pleasantly discover that underneath the princess exterior hides a real and genuinely warm, kind person, who wishes the world would, both, treat her well and take her seriously.

If you’re the man to do so, she will treat you like the king of her world and be the quintessential ever-feminine lady for you.

This is the woman who is put off by chivalry (or so it seems). Many men may find her an intimidating, defensive, chip-on-her-shoulder, bra-burning, Gloria Steinem follower.

But the modern feminist is actually just a woman who’s worked hard for everything she’s ever had and simply wants the credit and respect she deserves for the effort. Whether she was raised in the heyday of women’s lib or is part of the millennial generation (who believes in gender equality by default), she’s likely vowed to never depend on a man.

She can stand on her own two feet and that’s a good thing. She only interprets acts of chivalry as negative and condescending when those gestures are served up in a way that implies she’s helpless or as some strategy to “get something” out of her.

She considers herself your equal and dreams of a man who thinks the same of her. She actually will thank you for holding the door for her, but not because she appreciates chivalry, but because she thinks it’s the right thing to do as a civilized human being. She will most likely do the same for you (make sure to thank her when she does).

This woman is not out to get you or trying to “emasculate” you. It’s just best to let her ask for help (or first offer it) instead of imposing it on her. She appreciates chivalrous gestures that don’t trivialize her voice or take away her status as your equal partner.

So when the dinner check comes, don’t argue if she offers to pay. Instead, smile and tell her you really appreciate her offering, but that your intent is to make her feel comfortable and do something nice for her. Offer to let her pay next time if she lets you pay this once.

She is not trying to make your life hard. She is just trying to protect herself from possible heartache. She can be vulnerable, but she is not about to reveal that on the first (or second) date. She needs to trust you in order to let her guard down.

If you wish to feel like a gentleman with “The Feminist,” be her friend first. And remember: a real man is not afraid to let the woman take the lead.

Are you someone who is their 50s, and wondering about the dating scene? Dating in your 50s is not as intimidating as it actually seems.
Read more
Dating

Beginning to like someone is one of the best feelings anyone can experience. But, sometimes you hesitate to tell someone when you like them.
Read more
Dating

If you elicit emotions in everyone you speak to, you will really make yourself memorable.
Read more
wpDiscuz
0
0
Would love your thoughts, please comment.x
()
x
| Reply