Histrionic Narcissists: How They Use Sex And Lies As Weapons Of Manipulation 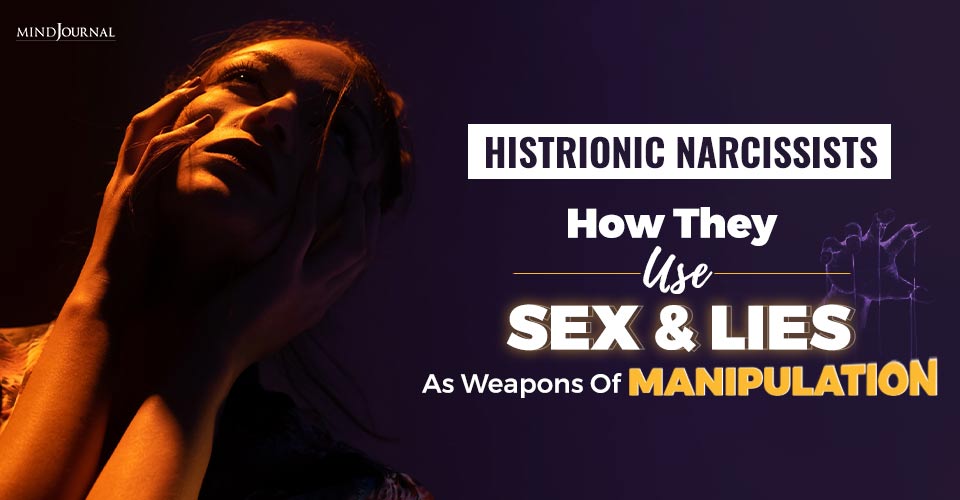 Just like narcissistic people, anyone who suffers from histrionic personality disorder has the ability to destroy someone’s life, along with their mental health, peace, confidence, and everything they believe in.

Cluster B disorders are a collection of negative traits organized into four classifications: narcissism, histrionic, borderline, and antisocial personality disorders. Personality disorders as a whole are described as enduring, maladaptive patterns of thoughts and/or behaviors that deviate from one’s culture (APA, 2013). These thoughts, beliefs, and actions are inflexible and overwhelmingly negative, and pervasive.

Despite our best efforts, we all have negative traits and unhealthy habits. What makes a trait pathological is the inability and unwillingness to change and improve. Even the kindest person on the road to sainthood can lash out in a fit of anger and ego. The act of being human comes with the free will of thoughts and actions. We all have the innate ability to be a narcissist; however, what separates non-narcissists from the crowd is the element of self-control and choice.

Related: Histrionic Personality Disorder: How This Type Of Narcissism Works In Women

We can choose to use people for our own intentions and then discard them; we choose to lie and hide; we choose to cheat and sneak around. This is one reason why the diagnosis traits for Cluster B disorders are so low: the individuals with these problems do not seek help because they don’t believe they need help in the first place.

Of course, to be clinically diagnosed with a specific disorder one must have a specific number of signs and symptoms. An individual can have traits of narcissism but not be officially classified as a narcissist.

Links Between HPD And NPD

Narcissism or narcissistic personality disorder (NPD) is most easily identified by the individual’s lack of empathy and overwhelming ego.

However, many victims of narcissism report their abuser’s sexuality and emotions as being sharpened into weapons. These overtly sexual and dramatic individuals have what the American Psychiatric Association calls histrionic personality disorder (2013).

Histrionic personality disorder has several similarities to narcissism but also distinct differences. The use of theatrics, emotions, and sexuality stands in stark contrast to the cold and egotistical narcissist. However, many of the hallmarks overlap.

Histrionic individuals have wildly exaggerated emotions and an overwhelming need to be noticed. In fact, the term histrionic means “dramatic” and “theatrical.” These people are well-known drama queens and busybodies who can’t handle being left outside of the circle of attention. The self-esteem of histrionics relied heavily on the opinions of others and can wax and wane according to their reputation.

When they fall from grace, histrionics are more at risk for depression, crying fits, and desperation to turn the story around in which they are the victim. Narcissists, on the other hand, may become angry and challenging and generally be stupefied by negative public opinion. They were—up until this moment—untouchable. If narcissists keep their negative self-image hidden and covered up by an overblown ego, then histrionics wear their self-centered hearts on their sleeves.