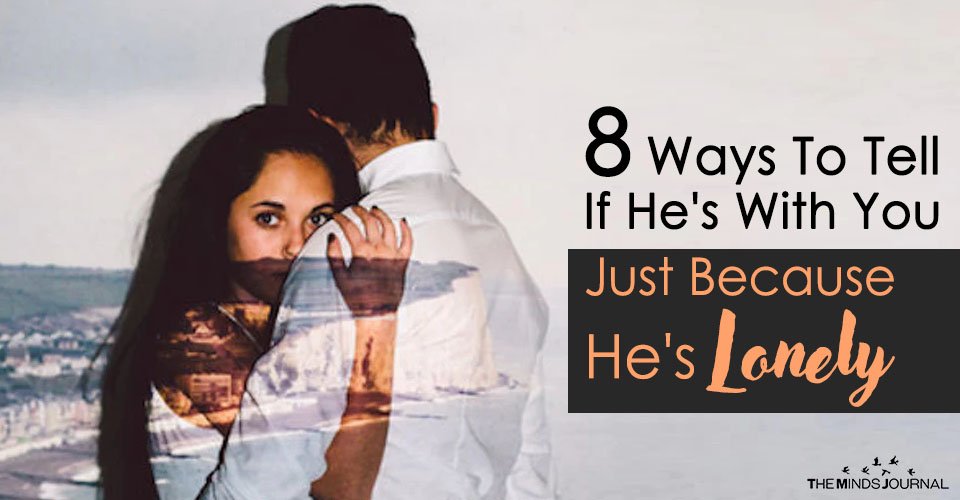 He’s With You Just Because He’s Lonely

Have you ever caught yourself wondering if the guy you are with really loves you, it may be because despite of all the confessions of love he makes or doesn’t make, his love doesn’t reflect in his actions.

Sometimes when we fall in love, our judgment is clouded by the euphoria of certain chemical rush in our bodies and brains and we fail to see the obvious that is in front of us.

We all deserve to be with partners that love and respect us wholeheartedly but sometimes we stick around partners who are not that into us because we live in denial or we hope that they will change their ways sometime.

If you stick around in a relationship like that, you are robbing yourself out of the chance to be in a happy, loving and fulfilling relationship.

If this sounds familiar, read on to find out the signs that he is not that into you as you would like to believe:

When you are in a relationship, it is an equal partnership between two people.

If you’re the only one who is chasing him like a celebrity, always making the first move, texting him, calling him, making plans to meet etc. Then clearly he is not that into you girl.

2) He doesn’t make any effort to know you better

If someone is interested in you, they would want to get to know you better. They would ask you questions about your hobbies, dreams, and ambitions. They would text you and call you and reach out to you to take the conversation forward.

If you feel the conversation is one sided and you are the only one who is doing the talking and he is not even interested to respond or doesn’t ask any questions.

Then, he is really not worth your time.

If you are always adjusting your schedule to meet him and work according to all his priorities and preferences all the time, then he is clearly treating you like an option.
And you should never settle to be an option in anybody’s life.

When he acts like he doesn’t care about you, then you should believe him. If he was genuinely interested in you, he would not act like he doesn’t care. He would make every possible effort to make sure that you know he loves you whether by saying it explicitly or by reflecting that care and affection in his actions.

If he really liked you, he wouldn’t keep you wondering.

5) He doesn’t express his emotions

Men are programmed to not express their emotions and portray a tough exterior from their childhood.

But they do have emotions and if they really like someone, they would not be able to hide it for a very long time.

If he is sure that he likes you, he would find a way to let that be known to you. He would not keep things to himself for long and not only that he would make every effort to find out if you like him too.

6) He doesn’t involve you in his life

In the initial phases of a relationship, the guy may not divulge a lot of his personal life to you.

But as the relationship strengthens, he would want to introduce you to the important people in his life, seek your opinion on decisions concerning his life and let you in his personal life.

If you have been spending quiet sometime with your guy and he has still not shared anything about his life with you, he is probably not thinking about the long haul with you.

7) He is only concerned about getting his needs met

People truly reveal themselves through their actions. Love making is a two way street and it should be pleasurable to both the partners.

If he is only concerned about getting his needs met and doesn’t give a hoot about making you feel loved, then you should really question yourself, why are you even spending your time with him?

If he never asks you about your choices and preferences and makes an effort to meet you midway, then you have some serious reflection to do.

You deserve someone who genuinely cares about you and is willing to make efforts to see you happy.

8) He doesn’t ask you out for dates

If he doesn’t make any effort to take you out on any actual dates and all his plans revolve around love making, then that’s all that he is interested in.

If he is not making any effort to take you out on an actual date and getting to know you better than all that he is really interested is a hook up.

Don’t set yourself up for disappointment in future by sticking around this guy.