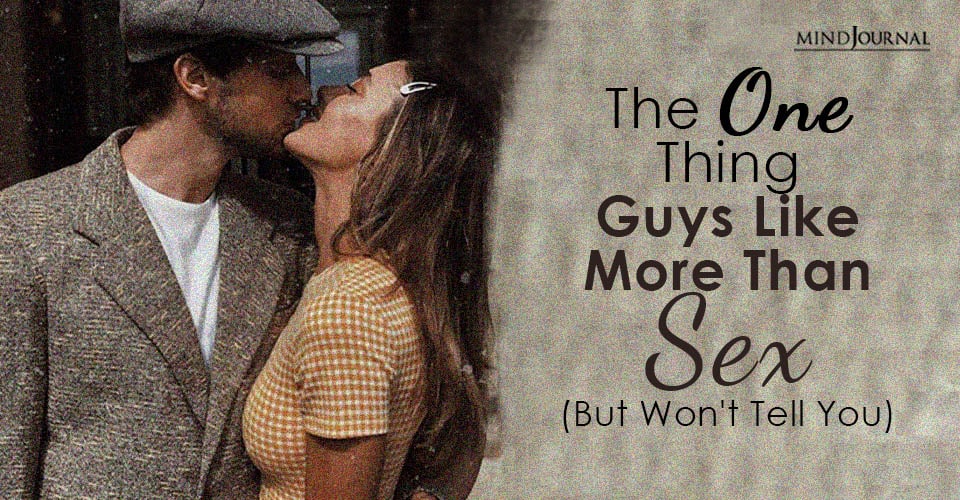 There has always been a common misconception since time immemorial that men only care about sex the most, and as long as they get that, they don’t need anything else. But there is one thing, that guys like more than sex, and expect from women, but the catch is that they might never tell what it is, to you.

So simple you can do it for him EVERY DAY.

Women’s jaws would drop if they could listen in on my conversations with married men. Our discussions contradict just about every misconception wives utter about their husbands.

The Power in Her Pinky

The truth for these men lies at the end of her pinky finger.

In that finger is packed an unspeakable power many wives choose to ignore or have yet to discover. It’s so simple and so tender that men are afraid to even ask for it. We barely talk about it with each other! We don’t want to appear soft. We don’t want to risk a woman’s reaction to our weakness.

It is the power of a delicate, skin-to-skin touch of feminine acceptance and approval.

When a woman calmly grazes the end of her pinky finger across any part of a man’s body and offers a verbal or non-verbal vote of confidence or support, his world changes at that instant.

It is so powerful we are often left speechless. Our throats and tear ducts begin to swell and we quietly indulge in the comforting reassurance of the moment. If we could package the word “love”, it would feel like this when the bottle was opened. Our “well-being meter” pegs out and our heart rate and breathing slow.

Every husband I know is dying to feel this. Simple, easy-peasy feminine acceptance and approval. Nothing else.  Just…this.

Related: 8 Stupid Ways A Guy Acts When He Likes You And What It Might Mean For You

A World of Men Speak About Pinky Power

These are real examples of how men across the globe describe it. In every case, I can hear their clenched voice of vulnerability trying to sound “strong” as they speak. Just for fun, try to imagine their accents as you read these.

Want to know more about what guys like more than sex? Check out this video below:

Women might laugh at the notion that their words and touch could cause a lump in our throats. Even if we try to explain it, they might just roll their eyes along with a big “puh-lease!”

The most common reason husbands feel like they can’t talk about it is because their wives have already proven they aren’t interested or can’t handle it.

In her brilliant article, “I Am the Patriarchy”, Jonalyn Grace Fincher listed 17 shining examples of how women refuse to let men be vulnerable. The article continued the discussion Brene Brown started in her book, Daring Greatly, where she addresses the male vulnerability.

“We ask men to be vulnerable, we beg them to let us in, and we plead with them to tell us when they’re afraid, but the truth is that most women can’t stomach it. In these moments when real vulnerability happens in men, most of us recoil with fear and that fear manifests as everything from disappointment to disgust. And men are very smart” (Brene Brown, Daring Greatly).

What most women don’t know is that just reading this list can make a grown man cry. These things happen on a daily basis for many husbands who don’t dare discuss them.

What To Do With This Information

For the Women: You have more personal influence and power in your relationship than you know. Your ability to inspire feelings of confidence and well-being in your man is available to you at all times – every minute of every day. What might you stop doing today and start doing tomorrow that could change his world in an instant? You have this secret power – why wouldn’t you use it?

For the Men: Admit it. You want pinky power. You love pinky power. Her touch of approval and acceptance is a gift you want more. If we’re honest, those are the feelings we seek through being physical, aren’t they? Don’t be ashamed of your needs and vulnerability. Stand proud in your manly desire for her pinky power. Explain it without apology or fear. Find out what HER version of pinky power is from you. Then apply generously.

The perception that guys only want sex is so wrong. Yes, sex is very important to them, but that does not mean they want only that. There are so many other things, that guys like more than sex. Women need to sometimes take a step back and realize that men are emotional beings too, and they also want emotional acceptance from their partners.

5 Things Men Look For In Someone Who is Marriage Material

Finding "the one" is an important choice that men make in their lives. They give it considerable thought. Are you marriage material? Here's how to find out. Below are five things that men look for in a wife, check them out!

I know that, for many women, knowing what men look for in someone who is marriage material is confounding.

We hear stories all the time about men who are in long term relationships with someone they aren’t ready to marry. And then they break up and he marries the next woman who comes along.

What is up with that?

We all know exactly what wom

Omega Male: 35+ Traits Of The Man Who Walks His Own Path

Men are supposed to be strong, smart, successful, attractive, ambitious and bold. Or so we have been told. But the omega male is a bit different. They don’t chase after money, women or validation, rather they dance to their own tunes.

Most of us are familiar with the alpha, beta and sigma male stereotypes, but we have rarely heard about the independent and unique omega male. The exact opposite of the Alpha male, the omega man is not ordinary or average in any way.

While strength, leadership, domination and competition are closely associated with the social definition of masculinity, not all men are made the same. As the omega male doesn’t match our definition of the stereotypical male, they often get overlooked.

When it comes to thinking about what men look for in women, we are quick to assume that their needs and desires must surely revolve around physical appearance. But is that the only thing men care about? Do we actually know what men really want from women?

Watch the video as I share my first-hand insights into what men really want from you. Then read on below for the five laws of attraction.

So, as I said in the video, what men really want from you has little to do with your waist-hip ratio, your looks, or even what underwear you’re wearing. Here are the five laws of attraction that will help you create a deep connection with your guy.

What Men Really Want From Y