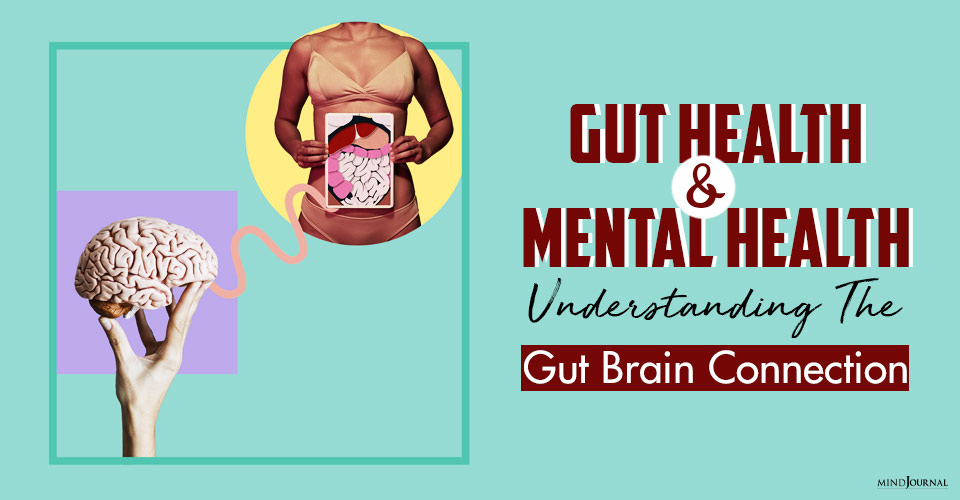 Is your gut feeling trying to tell you something? Well, it just might. This is how your gut brain connection works.

As recent studies reveal that your gut health may influence your mental health, your anxiety may be a result of miscommunication between your brain and your gut. Scientists believe that managing the bacterial population in the gut can help us improve mental disorder symptoms.

Why The Gut Is So Important

“The road to health is paved with good intestines!” –  Sherry A. Rogers

With new research being conducted every day, scientists are now talking more about the importance of gut health. Your gut is certainly one of the crucial biological systems in your body. But before we can understand how the gut and mental health are connected, we need to know certain terminologies and why the gut is so important, without getting overburdened with too much information.

The gut is also known as GI tract or gastrointestinal system. Microbiota refers to gut bacteria or intestinal flora, whereas the biological system of these microorganisms is known as the microbiome. Trillions of microbiota exist in the microbiome which is inside the gut. Probiotics refer to the good bacteria in the gut which is good for the body.

Now that you have some idea about your gut, let us take a look at why your gut is so important for your health according to science:

However, the most important effect the gut brain connection, microbiome, and the ENS have on our body is the impact on our state of mind.

Can Gut Health Impact Our Mood?

Apparently, yes! Researchers have found that stress, depression, anxiety, and other pediatric disorders like hyperactivity and autism, are associated with gastrointestinal abnormalities. Studies have also found that stress can be caused by certain gut bacteria which also affects the immune system adversely. Although more studies are being conducted, it has been medically established that our mental and emotional health greatly depends on our gut health.

Scientists have discovered that there is a complex two-way communication system between the gut and the brain that not only affects our physical health but our mental health as well. The complex interactions of the gut-brain axis (GBA) ensure the proper functioning of gastrointestinal homeostasis and impacts our higher cognitive functions. Apart from managing & improving gut functions, it also connects the intestinal mechanisms with the brain’s cognitive and emotional centers.

It has been proven that there are neurotransmitter receptors in the gut bacteria which is used to directly communicate with the brain. They communicate through neural pathways like the vagus nerve.

This high-functioning, complex line of communication between the nervous system and the gut is known as the gut-brain axis. Studies have discovered that when this super complex system is disturbed, it leads to various physical and mental health ailments such as inflammatory gastrointestinal disorders, obesity, anxiety, addiction, eating disorders, etc.

The impact of the gut brain axis on our mood is perhaps the most surprising element of this connection. Science has proven that most of the neurochemicals supply originates in the intestines. Around 90 percent of your serotonin and about 50 percent of dopamine is produced by the bacteria in the GI tract. However, recently researchers have realized the important role the microbiota play in producing these essential chemicals.

According to a story published in The New York Times in 2015, microbiologist Mark Lyte of the Texas Tech University Health Sciences Center, along with other experts, discovered that the microbiota secretes various chemicals, but among them, few are similar to the elements “used by our neurons to communicate and regulate mood, like dopamine, serotonin, and gamma-aminobutyric acid (GABA).” Lyte added these “appear to play a function in intestinal disorders, which coincide with high levels of major depression and anxiety.”

Back in 2014, Norwegian researchers analyzed the excrement of more than 50 people and found that the feces in depressed people contained a specific common bacteria. Thanks to studies like these, experts are now widely accepting those gastrointestinal irregularities are linked with several mental health issues like depression, anxiety, etc. Research even reveals that certain bacteria in the gut can lead to stress and anxiety which can actually damage the immune system.

Related: 7 Ways to Improve Your Gut Bacteria, Based on Science