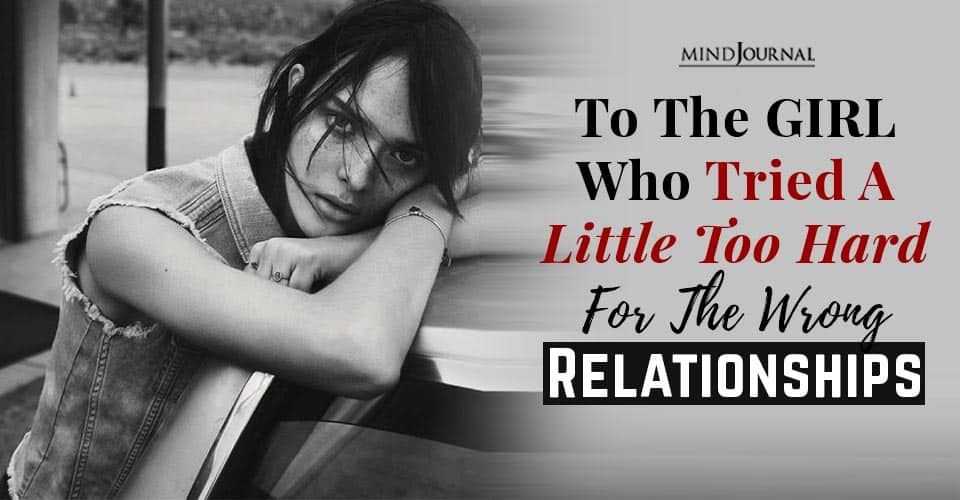 I want to tell you it’s admirable how much you try for people you care about. I admire how much you invest in people and what you’re willing to give. I think it’s a really redeeming quality how you jump into things both feet first with all of your heart.

You see the best in everyone.

The people others look past. The ones who are jaded and complicated. The ones you think you can fix. But it’s the people you think you can change who are the ones that hurt you the most. It’s those people who are going to take everything you give until you have nothing left to and then they walk away with it and you’re the one that feels broken.

The ones who drop in and out of your life like they have a right to.

You’re going to see a lot of people who tell you what you want to hear because they have motives that are unkind. And they’re only thinking of one thing. You’re going to have a lot of physical relationships with people but what’s going to lack is the emotional connection that just isn’t there. And that’s not something you can force.

Then when it comes to committing a lot of them won’t. You’re going to analyze yourself and pick apart your flaws thinking you are to blame for someone’s inability to be what you need, while you try really hard to play the role of what someone wants.

Related: Why Do We Get Attracted To People Who Are Wrong For Us?

There are going to be moments where you lose yourself pretending to be what they want you to be instead of being who you are.

I wish they didn’t make you feel like it’s a bad thing to care the way you do. But unfortunately, it’s a generation that doesn’t hold true to your same values.

I’m going to ask you to not change that. Even when you come across people who look at you and think you’re crazy for some of the standards and some of the things you believe in, they are going to try and make you feel wrong when in reality it’s them.

You’re going to do backflips for some people trying to be enough. You’re going to fall in love with people who don’t deserve that affection and effort. And a lot of them won’t reciprocate all you have to give because it’s different. You’re different.