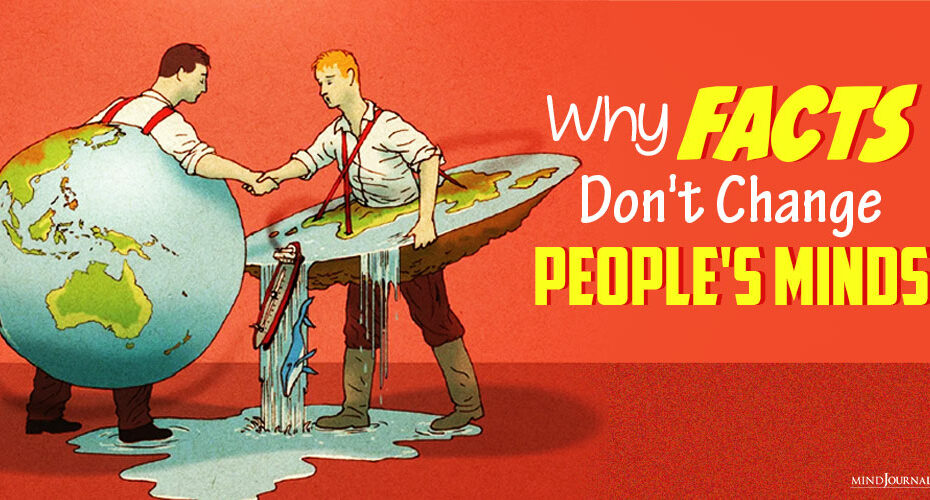 Why do many people staunchly defend their opinions and beliefs even in the face of overwhelming evidence that their ideas and views are totally incorrect? Why it’s hard to change people’s minds? Why even facts don’t change our minds?

One explanation is the common phenomenon of cognitive dissonance.

What Is Cognitive Dissonance And Why It’s Hard To Change People’s Minds?

Cognition is simply thinking and reasoning. It is the mental process of acquiring knowledge and understanding through thought, reason, analysis of information, and experience. Dissonance is a musical term that means a lack of harmony among musical notes, but can also mean a tension or clash that results from disharmonious or contradictory components.

In psychology, cognitive dissonance is the mental discomfort experienced by a person who simultaneously holds two or more contradictory beliefs, ideas, or values. The discomfort is triggered by a situation in which a person’s belief clashes with new evidence introduced to that person. To reduce the psychological discomfort, the person will have to change either their mind or their behavior so that the inconsistency or contradiction is resolved, thus restoring mental balance and emotional harmony. That is cognitive consonance.

This phenomenon, first described by Leon Festinger in 1957, helps explain why so many people will vigorously defend, excuse, justify, and keep their sacred beliefs even when confronted with irrefutable proof they are wrong.

There are several ways that people reduce their mental tension when their behavior and their available information clash. In psychology, it’s called “dissonance reduction.” Here’s an example that involves a person who is trying to lose weight and eat a healthier diet, yet is eating cookies they’ve learned are full of trans fats, sugar, and are high in calories.

What Can Change People’s Minds – Tips To Reduce Cognitive Dissonance

To reduce dissonance, the person can:

1. Change their behavior or belief so that it’s congruent with the new information. For example, “I’ll stop eating these cookies because they’re full of unhealthy fat and sugar and won’t help me lose weight.”

2. Justify their behavior or belief by changing the conflicting cognition. For example, “I’m allowed to cheat on my diet every once in a while.”

3. Justify their behavior or their belief by adding new cognitions. For instance, “I’ll go to the gym more often to work off the cookies.”

4. Ignore or deny information that conflicts with their existing beliefs. For example, “These cookies are not really that unhealthy, high in sugar or fattening.”

As a currently relevant example, consider that incontrovertible proof has been discovered that Donald Trump has lied, cheated, stolen, and committed very serious crimes that most people would face significant jail time for. What’s more, he has implemented policies that are hurting many people who voted for him.

Nevertheless, a great many people who voted for Trump vigorously defend their choice, despite the tremendous amount of credible, incriminating information about him that has come to light since November 8, 2016. Information that had they been aware of before then, might have dissuaded some from casting their ballot the way they did.

Related: Perception Vs Reality: 7 Things To Keep In Mind

In practice, here is how the people who voted for Trump reduce their cognitive dissonance when confronted with an ever-increasing amount of highly disturbing facts about him:

1. Change their behavior or belief by integrating the conflicting information into their worldview. For example, “I will no longer support our current leadership, and I will vote differently in the next election.”

2. Justify their behavior or belief by changing the conflicting cognition. For example, “The president is doing what’s best for the country and is the victim of a political witch hunt.”

3. Justify their behavior or their beliefs by adding new cognitions. For instance, “The president is a successful businessman and must know what he’s doing—he’s just too smart for most people to understand.”