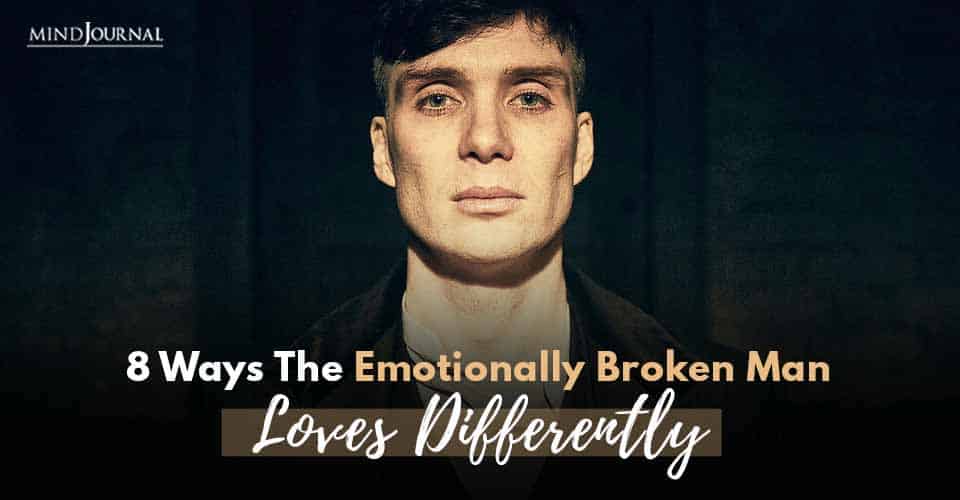 Our society puts so much pressure on men to be and act like men that they almost forget to experience and indulge in emotions. They become so masculine that emotions aren’t even a part of their everyday life. They forget to show hurt or care or even sometimes they forget to show any signs of stress. But the problem isn’t in the men; it is in our society that trains them to be like ‘men’.

Men can also hurt and have broken hearts. Men can also be emotionally broken. They live in our society and try to somehow deal with their pain silently yet gallantly.

Again, because society makes them do so.

And these emotionally broken men obviously love in a different way as well.

He has actually reached a point where problems are “normal”. Now, his reaction to problems is certainly different. If you are with him and ask him about his problems, he will not start a rant about what they have been going through, and will always pretend that he is fine.

In fact, he will just dismiss your question and ask you about your issues and troubles.

The thing is that these men feel just like all of us do but they don’t express like all of us. This is why it is difficult for them to heal and move on from the pain because they don’t even recognize their problems.

2) He seems to know what he wants.

He will always behave as if he has the solutions to all the problems that exist but deep inside, he feels broken and alone. He may show that he is complete and fulfilled but internally he is so broken and unfulfilled that you cannot even fathom.

So, if you think he knows what he wants, it only ‘seems’ so. In actuality, he doesn’t know a lot of things and he is also figuring out the things he doesn’t know but somehow he has mastered the pretense of knowing his path and shows as if he is super confident on his journey even though he may not even be sure of the small things he needs.

Even the most rigid people, sometimes break. Yes, this is also true for the emotionally broken man. As good as he is at keeping the pretense of being sure-footed and confident, the thing is it sometimes gets too much for him to bear after a point.

But the way he shows emotions is very different. This means that instead of crying and weeping or talking about his feelings, the emotionally broken man just quietly becomes cold. You may also think that he has a mood swing or something but the truth is that he is just numb.

He perhaps has reached a saturation point of feelings and has come to a situation where he isn’t able to have a moment of purgation. What he does instead is that he becomes cold. It is also a reflection of how immune he has become to the things that are going around him. Perhaps, comfortably numb.

4) He never shows his emotions.

Even if he is in the deep abyss of pain and sadness, he won’t give away his emotions.

His resolve to stay quiet is much stronger than his need to express himself. The society and how men are brought up is to be blamed for this. Men aren’t supposed to cry or shed tears even when they are in extreme pain.

The emotionally broken man has also imbibed this. Moreover, men are supposed to be the backbone or the support system of the family.

How can they cry?

5) He will focus on his masculine side.

Years of social conditioning has convinced men that concealing their feelings, and never being emotional is the true definition of being a real man. And that is exactly what an emotionally broken man does.

When he experiences heartbreak, and any other kind of pain, his first instinct is to pretend that he doesn’t care, and that he isn’t supposed to care because that’s what real men do. For him, his feelings are his biggest enemy, and he will try hard to never let them come to the surface.

So he will continue to bottle his emotions up, to the point where he is broken beyond repair.

Related: Only Real Men Cry: Men Who Cry Are Not Weak, They Are Stronger

An emotionally broken man will go to the ends of the earth to show that he is fine, by hiding his emotions deep inside his heart. That is why he feels lonely not just in his heart and mind, but also when he is around his loved ones.

He is fighting with his emotions for control all the time, and he is always scared of people seeing his softer, vulnerable side. No matter how hard he tries, it seems impossible to run from the truth.

The hurt, pain, and loneliness that he feels can be made better by people who love him, but he can never trust someone enough to show this side of him.

7) He tries to do more than what is expected of him in relationships.

Even when he is emotionally damaged, and has had his heart broken he still has a lot of love, support and kindness to offer. When an emotionally broken man falls in love with someone, he will always try to do anything and everything in his power to make his partner happy.

But, he will never open himself up truly. He will do anything for his partner, he will go to any lengths to see them smiling, but when it comes to him and his feelings, he will always choose to conceal them.

8) He is always very careful.

That is what being emotionally broken does to you. Every man who is like this calculates all the pros and cons before diving into something, especially relationships. Due to his lack of trust, he can never just let it go, and believe that he will not get hurt this time.

Because he has been let down over and over again, he feels scared and apprehensive of putting his already fragile trust into the hands of somebody else.

It’s is always difficult for him to even be in a healthy relationship, because he has never known a relationship like that.

Related: What it Takes to See a Man’s Feelings

Well, these are the things that an emotionally broken man goes through. They are less understood by society but they exist and mostly exist in pain and sadness, because they have always been made to feel that men who show their emotions, and be vulnerable are not real men. It’s time we change this thought and help them embrace their feelings and emotions.