Why Broken Men Expect Women To Manage Their Emotions For Them 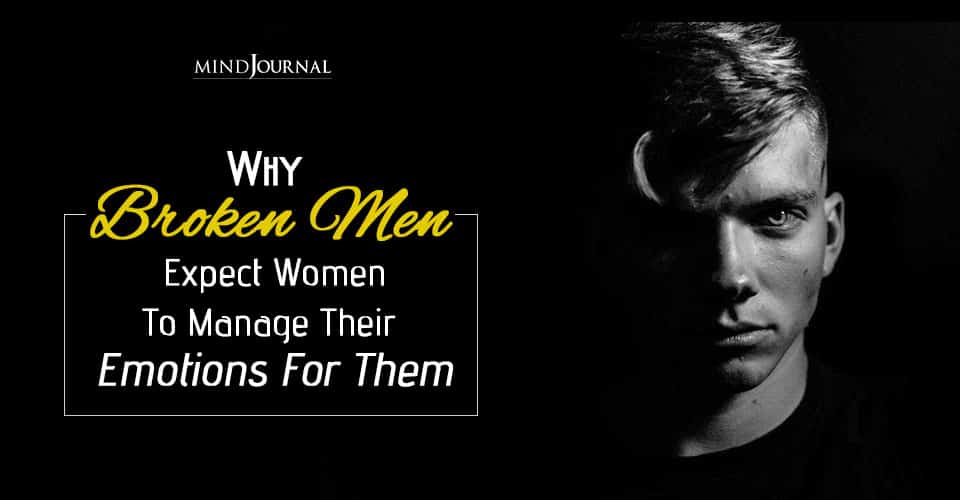 Why is it that messed up, broken men always expect women to handle their emotions for them? Women are not rehabilitation centers for broken men, nor are they responsible for fixing their messed up thinking and character.

“You can’t just expect men to keep their hands to themselves when you wear something like that.”

It’s something most women have heard at least once, or in many younger girls’ cases, have heard being told to them as a warning. When I first heard it, it came from a “concerned” male friend who was worried that a guy might lose his cool and grab me if I wore a skirt too short.

I was in college, and somehow, it was my job to make sure that men don’t rape me. Apparently, it was too much work for men to keep their own hands to themselves. So, rather than let me just feel safe and have them care for their own matters, my friend felt like I needed to know it was my job to make sure guys keep it cool and experience what it’s like to manage their emotions.

I wish I could say that my guy friend was the only one who thought this way, but it’s not true. As the years passed, I met more and more men who somehow expected women to be okay with managing their emotions for them — and trust me, the emotions women were expected to manage from men were never positive ones.

Related: 10 Reasons Why Most Men Find It Difficult To Handle A Strong Woman

The more I heard these kinds of opinions, the more I believed that women had to safeguard men’s emotions in order to stay safe.

In the eyes of so many people, it’s a woman’s fault when a man lashes out at her or anyone else. Why? Because he’s a guy and the woman probably should have done something to prevent it.

It’s really sad men can’t seem to handle their own issues yet tell women, in the same breath, that girls need to “just deal with it.” It’s sadder still, that somehow, women are the ones seen as the more irrational gender.

What’s even sadder is that I eventually believed that I was responsible for their emotions and actions, too. God help me, I really tried to be the one who could manage the turbulent emotions of broken, messed-up men.

Sometimes, men would expect me to be the one to calm them down when they were in a blind fit of rage. Other times, I had to be the Manic Pixie Dream Girl who would brighten up a broody man’s day just because I didn’t have better things to do. If I couldn’t cheer some bozo up, I was somehow the failure.

Every so often, I’d have to act like the innocent girl just because guys can’t handle feeling insecure over my number. Even more times, I had to be “a slut” to keep a man from straying. Or, maybe I had to be the Madonna who kept pure just because men “can’t handle themselves.”

Not once do I remember having a man regulate my emotions. They were too busy dumping their rage, their lust, and their insecurities on me. Rather, if I voiced my opinion with many of these guys, I suddenly would become the bad guy. In fact, when women expect men to regulate emotions, they’re called crazy!

This level of unspoken emotional labor is exhausting, and also somehow manages to stay an unspoken part of being female. Should I refuse to deal with it, I’d be the b****, the nag, the psycho, or the “irrational one,” just because I got tired of taking care of a guy’s emotional state.

Could you imagine if men were held to the same standard? They’d balk.