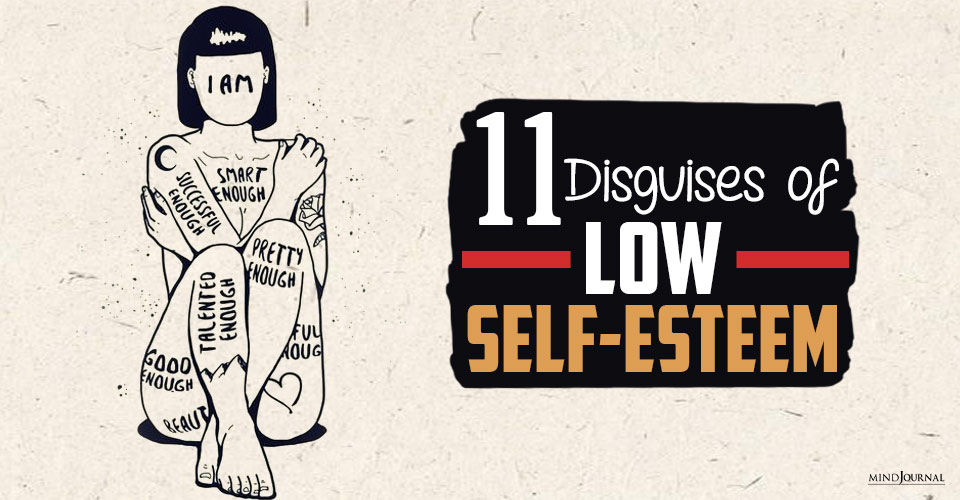 “Hiding, secrets, and not being able to be yourself is one of the worst things ever for a person. It gives you low self esteem. You never get to reach that peak in your life. You should always be able to be yourself and be proud of yourself.” – Grace Jones

Rather than always manifest as lonely people staring sadly into mirrors, low self esteem takes on strange disguises — such as passivity, even generosity.

Conditioned into brains mainly through trauma and abuse, self-hatred resembles — to users of those brains — the truth: I think I suck, therefore I suck.

This is its first disguise: pretending to be valid, right, innate. Then it forces its captives into painful poses, even entire lifestyles, based on false beliefs.

Here are some of self-hatred’s main disguises. They can have other causes, but it’s crucial to know how often they spring from a sense of unworthiness. Have you observed them in others or yourself?

Related: 7 Inner Archetypes That Cripple Your Confidence and Self-Respect

11 Disguises Of Low Self Esteem

Those who blame themselves for whatever does or even might go wrong often seek refuge in not doing anything. This stark arithmetic pervades low self esteem: “The less I do, the less I can do wrong.”

Thinking that nobody could ever love or even like them (and that anyone who tries will flee in horror) some (who aren’t natural introverts) choose solitude, protecting themselves from perceived rejection.

A deep sense of inferiority drives some to “prove” their worthiness relentlessly in school, work, all aspects of life. But each accomplishment feels invalid, unearned: The drive persists, unquenched.

Studies show that people with low self esteem delay tasks in order to escape being watched and judged. Often a self-fulfilling prophecy, this leads to chronic lateness, missed appointments, lost chances — and fights.

Related: Imposter Syndrome: Symptoms And How To Deal With It

As does overachievement, this springs from a belief that one is unworthy and thus must labor over even tiny tasks in order to gain some sense of acceptability, approvability, permission to exist.

It’s hard to feel intrigued by anything if one believes oneself unworthy of enjoyment. Dreading — and expecting — failure, loss or disappointment creates emotional flatlines.

It’s hard to seem intriguing if one believes oneself undistinguished, unattractive, unintelligent — especially if one has been shamed or abused for “talking too much,” “showing off” and/or “attention-seeking.”

Trying, not-quite-succeeding, then being mocked or punished for their efforts trains some people to always aim low, expecting just as little as they believe they deserve. No gain, but hey — no pain.

Related: 3 Pick-Me-Up Habits To Start Believing In Yourself

Having been blamed too often or too harshly for the effects of their various choices on themselves and others, some choose not to choose. Some parlay this as politeness: “Never mind me. You decide.”

Yes, it’s a virtue. But it can mask a sense of inadequacy for which some try to “compensate” by lavishing others with gifts, attention, money, or time. But studies show that people with low self esteem tend to regret such sacrifices, which yet further lowers their self-esteem.

That snippy, snarky, wicked critic, castigator, or complainer might employ the same reflexes as a wounded creature: scratch, sting, bite; attack to overcompensate for real or perceived weakness.

These disguises aim to manage pain. This is self-hatred’s driving force: a suffering that feels eternal yet deserved. Its captives lurch through life trying to dodge or soothe it while involuntarily creating more.

Related: 21 Things That Change When You Start Respecting Yourself

And these disguises can lead to misdiagnoses. They are not causes; they are effects. How often, seeing just such symptoms and not searching further, do we mistreat others or ourselves?