Why Men Should Deal With Romantic Rejection Better: 8 Reasons 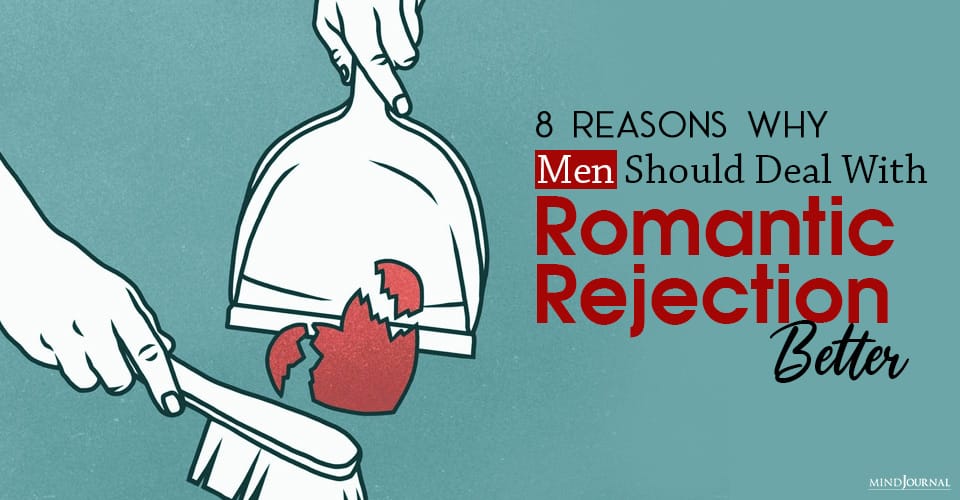 Romantic rejection can be hard for everyone. And the fact is, when it comes to dating and relationships, men have to deal with rejection more than women. Getting rejected by a woman you like or even love can be hurtful. It can feel even worse if it hurts your ego. And this can lead to a number of negative emotions like anger, bitterness, frustration, anxiety & depression. This can be damaging both for you as well as for the woman you like.

Rejection is a part of life as a man.

It’s as common a part of the heterosexual male experience as there is: sooner or later, a woman rejects you. She turns down your offer for a date. Declines the drink you want to buy her. Side-steps the kiss you go for at the end of the night. Isn’t receptive to your invite to your bedroom. Or she just plain wants to not see you anymore. Possibly even divorce you. And it’s never easy.

Sometimes we damn well deserve it. Sometimes we don’t. But either way, we have a moral responsibility for dealing with it better. Because let’s face it: male rage is a very real problem for women in today’s world. There are too many Elliot Rodger types in our midst, so incapable of dealing with rejection that their skewed perspective leads to needless tragedy – on a small or large scale. So before the next one of us says, “It’s not fair, I don’t deserve this rejection. I’m going to make her pay,” it’s time we all got the fuck over yourselves, and help our fellow men understand that part of being a man is accepting what we can’t change.

Here are a few reasons to get us started:

Read Why The Pain Of Rejection Hurts

1. We’re not entitled to her acceptance.

Yeah, yeah, yeah. So you dressed up real nice. Put on cologne. Opened the doors for her, had a great conversation, and maybe bought her dinner. Even learned swing-dancing last fall so you could charm her on the dance floor. (Which she loved!) But, hey, for whatever, in the end, she opted out. Declined the kiss, the next date, the whatever. She said, “No thanks.” and maybe never even gave you a reason (which she has no obligation to offer).

You might be tempted to be pissed. Unfortunately, that’s the romantic casino you chose to roll the dice in. You gambled and lost. But don’t worry, you can gamble again. What you can’t do is make it your life’s mission to “get even” with her. You’re going to be a man about it. And being a man isn’t about not feeling hurt: sure, you can feel hurt, bummed out, whatever. Hell, you can even tell her that. The show of vulnerability is important. But you shouldn’t try to make sure she’s hurting, too, by lashing out emotionally (and certainly not physically).

2. She doesn’t deserve our anger.

She’s just living her life. And while the burden of initiation still appears to rest mostly on the shoulders of men, that burden doesn’t entitle us to expect compliance for putting our necks out there. We have no more right to a woman’s time & affection than we do to Harvard granting us unconditional admission. We can knock on the door, but it’s up to them who they allow into their world. Not us.

3. Want to impress a woman? Show her how you handle resistance.

A strong man doesn’t fly into a rage when things don’t go as planned. He handles it with maturity. With grace. With a smirk, and a nod of understanding. And adjusts his approach accordingly. This doesn’t mean “trying again” so many times until you wear her down (although a little persistence has been known to make a good impression.) It’s about knowing when your sights are best set elsewhere. And if you do want to change her mind, start by showing you respect for her decisions.

4. Becoming a disgruntled “rejectee” makes you one step closer to a stalker.

Or an abusive boyfriend. Or a rapist. Or a murderer. Think I’m stretching? 1500 women are murdered by intimate partners every year. And they all started out somewhere–often just with getting overly upset at a casual dismissal. You letting yourself getting too wounded by her disapproval means you could be on your way to some ridiculous pattern of over-reacting, and at its worst, possibly physical abuse.