How to Be Happy with What You Have According To Psychology 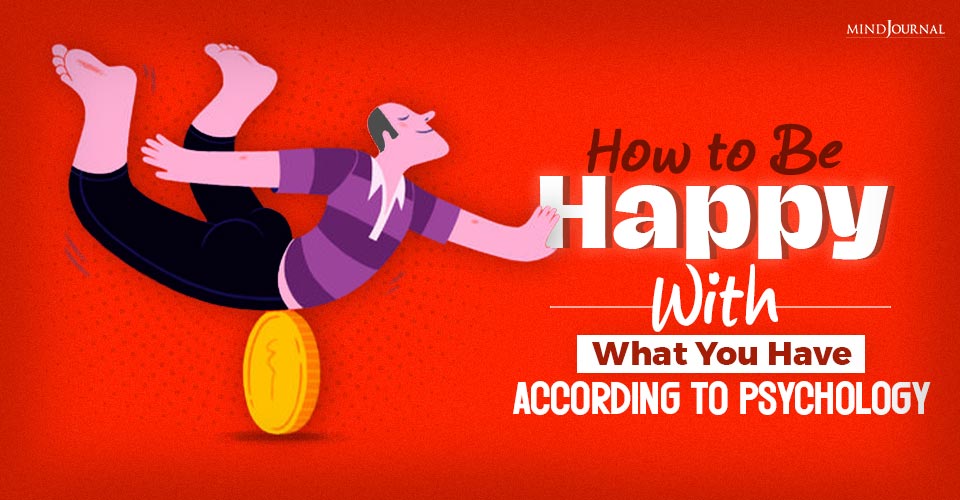 Do you find it difficult to be happy and optimistic in your daily life? You are constantly comparing yourself to others and become dissatisfied when others surpass you. Here is everything you need to know about happiness and resentment.

The Evolutionary Psychology Of Social Positioning And Envy.

So picture this: You go into the mailroom at work and there’s an envelope from the president of your company. Of course, you rush to your desk to open this one at breakneck speed. Did you do something wrong? Did you do something especially right? Are you being asked to take on an important role within your organization?

You make it to your desk and open that envelope up in record time. It is a personalized letter from the president to you congratulating you on your recent accomplishments and thanking you for your dedication to the organization. It ends by indicating that you will receive, starting immediately, an on-base salary increase of $10,000 a year. Wow! You were NOT expecting this! You can hardly contain your joy at this wonderful news!

You take a photo of the letter and text it to your spouse, who also works for the same organization. She texts you back with a photo of a letter that she just received. Also today. Also from the president of the organization. She is being given an on-base salary increase of $12,000 a year for her accomplishments. In the next hour, you find out about similar letters received by several of your colleagues. And get this: In each case, the raise is larger than your own!

An hour ago, you were bursting with joy at the news of your raise and the recognition of your great work. Now, 60 brief minutes later, you are sulking and are planning to go home early so as to avoid seeing everyone else whom you work with. Your joy has turned to shame and embarrassment pretty quickly. You never want to see any of them again!

On your drive home, you call the only person in the world who might make you feel at least somewhat better in this moment: your mom. Mom, of course, congratulates you and tells you that she sees this as GREAT news! And that you should focus on your own positive outcome. Hey, you just got a $10,000 raise! That money will make your entire life so much easier for the rest of your days. Good for you!

After you hang up with Mom, you find your emotional state immediately shifting back to all-out pity-party status. You find yourself not even being able to be happy for your wife’s raise. And the money from her raise will directly benefit you and your children immensely moving forward.

What the heck is going on?

To best understand why so many of us would feel more negative than positive emotions in the aforementioned example, here is a thought experiment. Which of the following would you prefer to obtain?

If you’re human like the rest of us, there is a good chance that, in fact, you’d choose option A.

Of course, in an absolute sense, this is ridiculous. The more money the better, right? And it’s clear that $10,000 is more than $9,000. So in terms of your own lot, you should pick option B. But let’s face it, one’s salary is largely an index of one’s status within an organization. And with so many economic indicators in our world, salary is often less about its surface-level function (how much money you get) than it is about one’s position and value within a community (see Frank, 2005).

Related: Social Comparison – Two-sided Sword That We Should Be Careful To

The Evolutionary Psychology Of Social Rank

The human mind evolved in small-scale, nomadic communities across thousands of generations (see Geher, 2014). Under such conditions, being ostracized or being designated as low in value and status would have threatened one’s ability to survive. Humans evolved to depend on close others. And achieving a relatively high status in one’s circle is one way to ensure that others will support you and have your back in life.

For this reason, we evolved to be very sensitive to markers of our relative positions in social circles (see Hill & Buss, 2010). Threats to our social rank famously lead to adverse emotional consequences such as anxiety, shame, and embarrassment (as in the salary-based example used in this article). When it comes to our evolved social psychology, the human mind is highly relativistic in nature.

For this reason, we often make decisions that might seem irrational on the surface. Someone might take a cut in pay to obtain a high-status position such as Director or Vice President, for instance. Someone might spend outside his or her means to live in a gorgeous house that he or she can barely afford just so as to keep up with the Joneses. And people may well prefer to get no raise at all compared to getting a smaller raise than everyone else gets.

From a rationalistic perspective, none of these decisions makes sense on the surface. But if we keep in mind how incredibly relativistic our evolved social psychology is, it all comes to light.

The Dark Shadow Of Envy In The Human Experience

While there are many downright deplorable aspects of the human experience, I’d argue that envy is right up there as one of the worst. Envy exists when you want something that someone else has. And envy totally relates to our evolved positional psychology when it comes to marking our social rank (see DelPriore, Hill, & Buss, 2012).

On the surface, envy never makes sense. Imagine that you are someone who loves to travel. And you are at a party and you find out that some close friends have just scheduled a two-week trip to Hawaii. Meanwhile, that same day, you and your spouse looked at your finances and concluded that you will have to pass on your annual two-night getaway at the Jersey shore this year.

On the surface, the fact that your friends are going to Hawaii is just awesome and you should be happy for them. But, again, humans are humans. And many people might feel at least a splash of envy in this situation and, along the way, they might find it hard to even express happiness for their nice friends who are planning their first-ever luau with their two adorable children.

The ability to travel is clearly a luxury and is, thus, what Robert Frank (2005) would term a positional good. It provides information about your social rank. Your friends are going to Hawaii. You’re, literally, going nowhere. The dark emotion of envy evolved to motivate people to take steps to move upwards in their social rank, regardless of the often-despicable forms that envy can often take in our worlds.

Related: Top 5 Mental Health Apps That Will Make You Happier In Life

It’s not always easy to be happy with what we have. Humans evolved social psychology that is positional in nature. We evaluate our social rank constantly and we feel threatened when our value is low within some localized community. We can understand this from an evolutionary perspective, as our ancestors, living in small, tight-knit groups, who were low in status were less likely to reap benefits from others. So we evolved the tendency to be ashamed if our value is publicly lowered and envious if someone else in our circle has some marker of higher status than ourselves.

Understanding our evolved psychology surrounding positional status and envy can help us understand the negative emotions associated with these phenomena. And, just perhaps, a fuller understanding of these concepts can help us actually be happier with our own lot in life.

I hope so because at the end of the day, we’re only here once. And, consistent with the emerging field of Positive Evolutionary Psychology, we should always remember life is too short to spend it on such negative aspects of life such as envy. You only get one chance. Focus on the positives, and being happy to make it count.