Choose A Mandala And Discover Your Hidden Magical Power 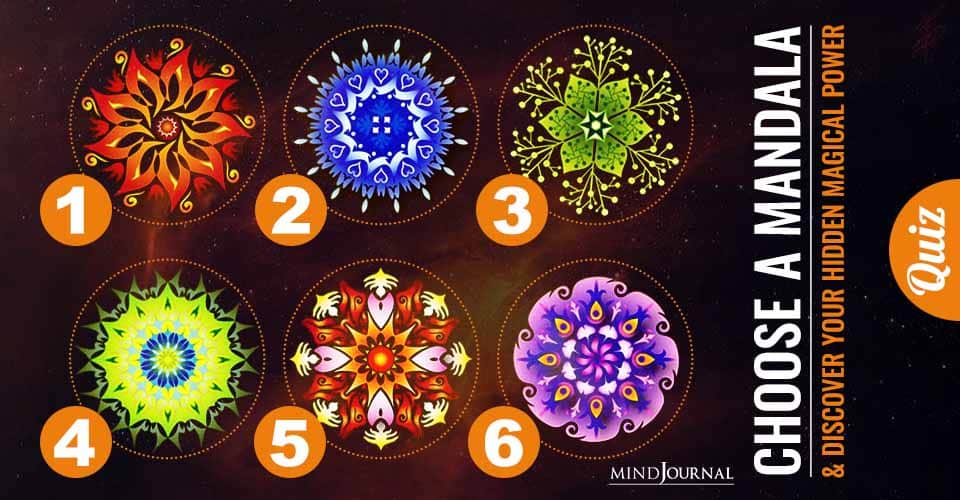 Choose a Mandala: Your choice will reveal which power determines you and how you could make use of it for good intentions. Mandala is a Sanskrit word meaning “circle”. As a spiritual and ritual symbol in Hinduism and Buddhism, it represents the universe.

Through vivid colours and symmetric geometric patterns, it depicts the numerous facets of cosmos, its chaotic harmony. Mandalas’ eloquent symbolism illustrates both the qualities of the universe and the human spirit.

There are many interesting books about mandalas. In some editions, you can paint the patterns by yourself. This can be a very meditative action. We suggest this one: Mystical Mandala Coloring Book by Alberta Hutchinson, although there are several similar works to obtain.

Related: 4 Most Powerful Celtic Mandala Symbols and Their Hidden Meanings

What your mandala reveals about you!

Is our predilection for one mandala over another revealing about our inner self? And how! In the test we are presenting to you today, you can select one of the mandalas out of the ones in the photo above. Your choice will reveal which power determines you and how you could make use of it for good intentions.

And here we go:

The first mandala is a leftwards rotating ”sauwastika“, this means a reversed swastika. Swastika has been a symbol that has been misused by Hitler’s Nazis. In fact, however, it pertains to a powerful ancient symbol that has been used in many religions, from Hinduism and Buddhism to European cults. Besides the name Swastika derives from Sanskrit.

As it stands in the corresponding article in Wikipedia: The word is ancient, derived from three Sanskrit roots “su” (good), “asti” (exists, there is, to be) and “ka” (make) and has meant a “making of goodness” or “marker of goodness”. The icon connotes and reminds the viewer of something “conducive to well-being”, “make good”, prosperity and dharmic auspiciousness.

The counterclockwise rotation of the first mandala suggests that the powers involved here are destructive ones. But this is not something negative. A prerequisite for creating something new is the ability to get rid of every unnecessary condition that hampers your evolution. Sometimes “burning down” everything can pave the way for something radically new. Thus, your power to be a Destroyer can be a beneficial one.

Related: Choose A Mandala And Discover What It Reveals About You

The second mandala is drawn on the base of the four elements of nature. These appear and act in harmony and our powers sprout from them. Still, the fifth element, the Spirit, is absent. It is the spiritual element that connects the ones of nature. Your power is the one of Love and the Union with the Non-Perishable. You bring the neglected Spirit back το the Equation of Elements.

Related: Choose A RUNE What You Pick Will Reveal What The Future Holds For You

This mandala is drawn on the base of the mystic power of the number 6. The two opposite powers of Female and Male are at play, shaping two triangles with six sides. Your power comes from the dynamic balance of these powers within you.

The number twelve is important in many ways. Remember the twelve Ancient Greek Gods residing on Olympus, or the 12 Apostles of Jesus. 12 are also the months of the year. Your power lies in the fact that you flow in harmony with time. You are patient and that is a characteristic which is advantageous for your evolution. Time will lead your plans to perfection.

Related: Choose Your Celtic Sigil And See What It Means

A pattern based on number 8 is linked to the wheel of wisdom. In some sense, it is also a crossroad in which several options are offered. One the one hand, you are able to create multiple possibilities and therefore you are never trapped in any dead-end road. On the other hand, you are able of making right decisions and select the best path towards virtue. You are guided by an inner compass that shows you the right way.

Contrary, or better complementary, to the first mandala that depicts a counterclockwise suawastika, this mandala is a swastika in motion. Forget about its Nazi misuse, this a symbol of light, life, health, peace, and wealth. Your power is a harmonic and creative one. You move forwards through time and life and you create out of null.

Which mandala did you choose?