The 8 Types Of Women Guys Must Avoid 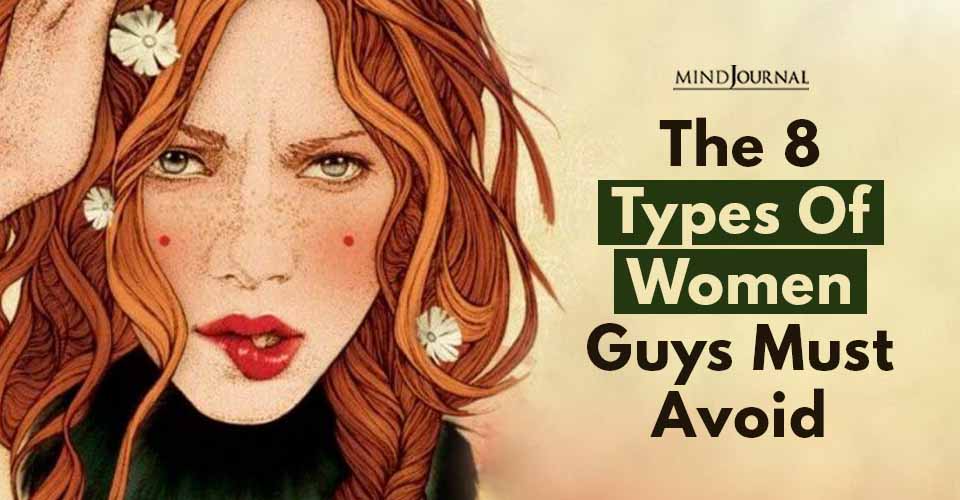 Sometimes, women don’t actively choose to be single and alone, and that can make them worried and stressed. If you think about the problem more deeply, maybe you’ll find out that you’re still single because you’re one of the eight types of women guys avoid.

While most of us feel that we are unsuccessful in the world of dating because of our imperfect body and uncool wardrobe- let me tell you that all of those external things are secondary to men. The real problem lies in the personality of a woman. It may sound harsh, nonetheless, it’s a true fact.

Now, don’t take this personally- consider this article an example of gender equality- because we have written about things in men women hate, many times before!

A gentle reminder- if you identify yourself as one of these eight types of women guys avoid, described below- fret not. We aren’t implying that you’ll be alone for the rest of your life. Consider them to be red flags that repel the other half of the population, and with the tips given below, we hope you’ll be more aware of the problem.

Why she’s avoided: She’s has a harsh behavior towards the opposite gender, often wounding men with her abrasive judgment. She finds flaws in almost every kind of man. If he’s confident, she labels it as cockiness. If he likes to crack jokes, she sees him as a walking cheeseball. If he sports a casual style with an untucked shirt, she perceives him to be a disheveled slob who must be avoided.

What can you do if you are this woman: Usually, this hatefulness towards men comes from past issues. Probably a man wronged you and broke your heart. But that one man doesn’t represent all men, so cool your anger. Try to understand the source of these feelings and change your behavior towards men.

Why she’s avoided: Bunny boiler is a term that is used with reference to the 1987 film Fatal Attraction, where the rejected woman, Glenn Close, boils her lover’s pet rabbit. It represents a woman who acts full-blown crazy when spurned by her man. She’s the lady who seems like a devotional lover at first, but she’s actually the obsessive lover, who’s obsessed to the point of engaging in mad, vengeful acts.

What can you do if you are this woman: Calm yourself down. Get a hold on your revengeful thoughts. You can’t control everything happening in your life. Every woman has been with a man at least once in her life who isn’t that into her, and takes her casually, despite her efforts. It’s okay, you can’t control it. Just don’t boil the poor bunny!

Why she’s avoided: Looks-wise, she’s quite the stunner that most men would love to romance. But once you try to go beneath the attractive exterior, you’ll be repelled by her constant need for drama and pampering. She’s high maintenance and enjoys being worshiped like royalty. But when it comes to returning the gesture, she doesn’t consider it necessary at all.

What can you do if you are this woman: No doubt that you’ll find a man to be your prince charming (read: servant) because many men want to land a hot girl. But don’t complain when he discards you like an object and goes to a newer and hotter model. So just wait for that man, or start working towards being a nicer human being in your relationship.

Why she’s avoided: Most guys dislike nothing more than their girlfriend gossiping about every detail of the relationship, including the intimate times, to her girl gang. Call them insecure, but they simply despise the giggles, knowing smiles and whisperings that he faces when he meets her friends.

What can you do if you are this woman: We get it, you love sharing the joys of your love life with your girlfriends, it’s only human to enjoy it. But understand when to exert discretion. Would you like it if your guy blabs to his friends about your personal moments with him? Wouldn’t you feel exposed? Men are no different in this matter.