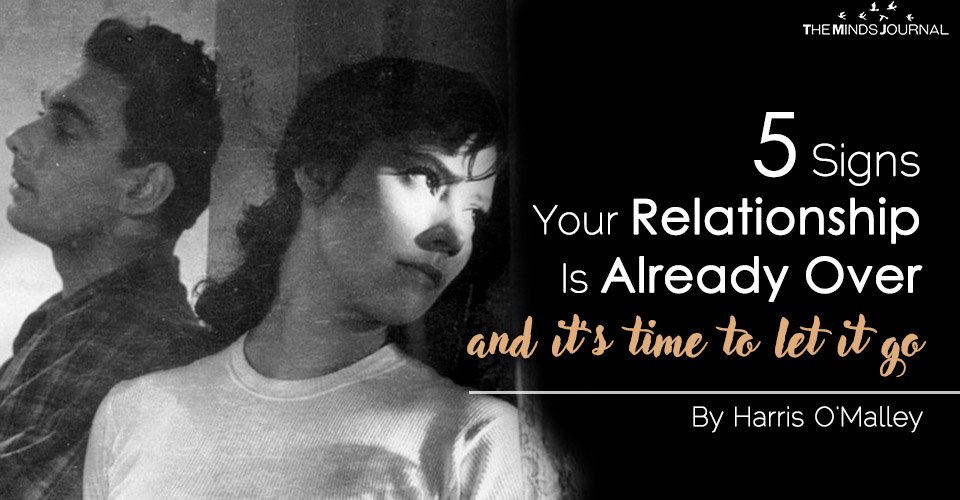 Breakups happen. It’s a fact baked into every relationship: all relationships come to an end until one doesn’t. Sometimes the breakup comes screaming out of the clear blue sky while other times it’s like watching an oncoming train and knowing you’ll never get out of the way in time. But not every relationship ends with a loud and dramatic climax. Sometimes the end has already come and nobody has noticed. Your relationship is shuffling along like a zombie, putting on the empty performance of being a couple even as your hopes and dreams quietly bleed into despair.

Sometimes there’s that vague sense that things are wrong as you both try to half-heartedly keep things going because that’s what you’re supposed to do, right? After all, it can be hard to pull the trigger on that break-up, even when you know it needs to happen. However, there comes a point when everyone needs to realize that the patient is dead and there’s no amount of CPR, couple’s therapy, lingerie, or weekend getaways that can bring it back.

Here’s how to recognize that your relationship is already over and it’s time to let it go.

Communication is vital for a relationship’s success. After all, nobody’s a mind-reader and expecting your partner to just be able to divine your wants and needs is a one-way trip to frustration and disappointment. However, there’s a difference between communicating and “filling the air with noise”. We have a tendency to mistake “talking” for communicating and strive to cover those moments of silence with verbal flack as though it were a way of chasing relationship difficulties away. In practice though, it doesn’t matter if you can coexist in companionable silence or if you chatter away like a pair of extroverted cockatoos as long as you can express your needs clearly to one another. When everybody is talking but nobody’s actually connecting, you’ve got problems. And if the two of you can’t find a way to bridge that gap, then the relationship is dead in the water.

It doesn’t matter how long your conversations can go for if it’s all surface. If you can’t ask for what you really want or need or open up about how you actually feel, then your relationship is functionally over. It doesn’t matter if you feel like it’s something you’re not “allowed” to want or if you’re afraid that if you ask, the answer will be “no”. It doesn’t matter if making your needs clear will result in a fight; avoiding or ending a conflict doesn’t actually make a relationship stronger if nothing is resolved and frankly, some fights need to happen. Sometimes conflict is how you move things forward. If you don’t have the emotional space and security to make yourself heard and be understood, then it’s time to move on.

4)  You’re Going From Fight To Fight

No couple, no matter how perfectly in sync or in love they may be, can avoid fighting. As long as you have two separate people, you’re going to have conflict. Hell, for some couples, the “explode at one another, then passionate make-up sex” is part of their dynamic and they’re just fine with it.

But there are the occasional flare-ups that are part of every relationship and then there are the relationships where those moments of quiet aren’t tranquility, it’s the calm before the storm. When your relationship has become a never-ending string of arguments, grievances and all-out fights, then you’re looking at a relationship that’s gone past it’s expiration date. Going from fight to fight is a surefire sign that something has gone horribly wrong at the core of your relationship and neither of you are managing to address it. Maybe you’re unwilling to admit that you were wrong. Maybe they can’t quite bring themselves to let go of previous arguments and they’ve been storing up slights and affronts like prize tickets from passive-aggressive games of emotional skee-ball and now they’re ready to get the giant stuffed teddy bear of I-Am-Less-Wrong-Than-You-Therefore-I-Win.

It’s worth noting that fighting doesn’t just mean raised voices and harsh words. The fact that you’re not yelling doesn’t mean that you’re avoiding a fight or that you’re their emotional superior. “U mad bro” doesn’t work online and it certainly has no place in relationships. Cold contempt, snide comments or old-fashioned petulantly ignoring your partner are just as emotionally damaging forms of conflict as a knock-down, drag-out, neighbors-called-the-cops argument. It’s still emotional violence and it takes chunks out of your heart and soul, and the only way to heal is to quit trying to affix blame or get the upper hand and just leave.

And while we’re talking about storing up resentments…

3)  There’s No Trust (And Nothing Gets Forgiven)

One of the hardest things to accept in relationships is that nobody is perfect and people are going to fuck up. Sometimes the fuck-up is painful but something that can be worked around. Other times, that fuck-up is egregious enough to be a relationship Extinction Level Event.

Part of what makes a relationship work is putting in the effort to get past those ugly parts and repair the damage… but that requires everyone involved to actually try to fix things. Fixing things only works when it’s a two-way street; one person has to work to undo the damage they’ve caused and the other has to work to accept those amends, let the trust be rebuilt and find the strength to forgive them.

All too often there are times when we feel obligated to say all the right things and go through all the motions but we never actually let things heal. Saying you forgive someone or that you’re forgiven sounds lovely but it doesn’t mean anything if there’s no, y’know, forgiveness involved. It’s one thing when the wounds are still raw. It’s another when there have been good faith efforts to repair the damage and move on and you or your partner just can’t or won’t move past it. Many times, toxic partners will withhold their forgiveness as a means of revenge or control. Other times, they simply will perpetually hold the relationship hostage as a method of ensuring “good” behavior. If you’re always looking for evidence of future transgressions or your past sins are continually brought up as a weapon against you, then it’s clear that the damage was far too great, no matter what anyone says.

2)  Nothing Ever Gets Resolved

But no matter whether you’re calm and rational, heated and emotional or anywhere in between, it doesn’t make a difference. At the end of the day, everything is going to stay exactly where it is because nobody’s willing to meet anyone else halfway. Hell, they’re not willing to even move a quarter of an inch. They’ve planted themselves like a tree and said: “no, now deal with it.”

The worst times, of course, are when your partner even agrees with you that things need to change. They go through all the motions and say all the right words, and for a moment, you feel like maybe you’ve reached a breakthrough. But then reality sets back in when those promised changes never happen. Ever. Now you’re stuck at the awkward intersection of having yet another discussion about the matter, possibly even a full-blown fight with all the awkwardness and emotional distress that entails… or you just give up because what’s the point?

Maybe they’re trying to keep control in the most passive-aggressive way possible. Maybe they just don’t care enough to change anything. Doesn’t matter. Whether you can’t or won’t address the underlying problems, the best thing for both of you is to make a clean break of it.

Many people linger in broken or flatlining relationships because they’re looking for something they can point to as a reason to leave. Ironically enough, this is the surest sign that the relationship is over; it’s over because you’ve decided it is.

Something that a lot of people forget is you don’t need proof that a relationship is over or that you need a sign that it’s time to go. They know what they want – to break up with their partner – but they’re looking for something that will give them permission, something they can point to and say “There! That’s why I’m allowed to end this.”

But at the end of the day, the only reason you need to end a relationship is that you want out. There is no breakup court that’s going to veto your choice to leave and demand you come back with proof. Relationships aren’t the launch codes on nuclear submarines; you don’t need both parties to turn the keys to finally pull the trigger on the breakup.

You don’t need to be in a relationship one second longer than you want to be. Once you’ve decided that you want out, you’re allowed to leave. Don’t sacrifice your happiness or your time in a search for an “acceptable” sign or reason for ending things. Once you realize the relationship is over, then do what needs to be done: end it, quickly and cleanly.

10 Signs You Shouldn’t End Your Relationship

5 Signs It’s Time To Let Go Of A Relationship