17 Connections Between A Narcissist And Their Victim With Anxiety Disorder 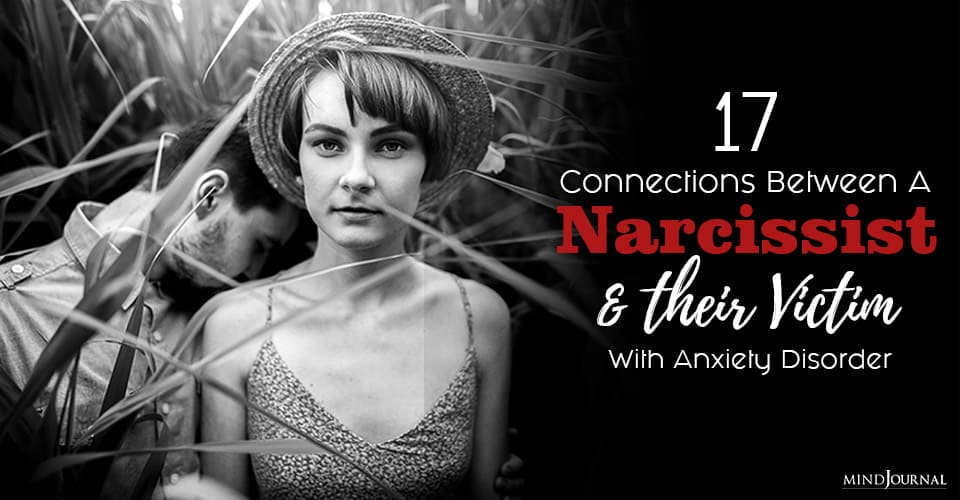 14. A narcissist will maliciously take you down but manipulate you in such a way you don’t even realize they’ve done it or have triggered you. While someone with anxiety doubts themselves more.

It’s a snide comment that will ruin your day. Something said about the way you look. And when you tell a narcissist, ‘I don’t like that you said that’ or ‘I’d appreciate it if you didn’t say those things in the future,’ instead of having empathy for you, they realize they got to you and they mark it as a win for them. They respond to whatever you might say with, “well it’s true isn’t it?”

Someone with anxiety then starts to believe it. When a narcissist has insecurities they mask it by making others feel worse than they do.

15. A narcissist will continue to test you and push boundaries while someone with anxiety allows it.

As long as you let them get away with things, they are going to keep pushing you closer and closer to the edge. And the thing about people with anxiety is they have a lot of tolerance and even more resilience when it comes to everything.

You ask someone with anxiety why they are tolerating treatment like they and not putting their foot down and they’ll tell you it isn’t worth it because someone like that really isn’t worth any more of their time and attention. They try so hard to just heal the best they can.

16. A narcissist uses emotional abuse to silence you while someone with anxiety then silences themselves.

Narcissistic abuse is so much about messing with your head so there isn’t concrete evidence someone can look back at and say, ‘you’ve done this, here is proof.’

When there is physical abuse, there are marks and bruises and you know it’s not right.

When it’s emotional abuse it’s all about the interruption. While a narcissists motive might have been to take you down verbally, days pass, they forget what happened and they say something like ‘you were being too sensitive.’ Again. reverting to denial of fact vs. fiction.

A narcissist wins when their victim becomes silent about the abuse. And someone with anxiety reverts to silencing themselves in any and all situations because there is blame projected upon themselves that they shouldn’t take ownership of but they do.

17. Everything is about control and this is where a narcissist and someone with anxiety have the greatest conflict.

Related: Trauma Bonding: Why We Stay In Abusive Relationships

Eventually, the victim with anxiety learns to pull away and control parts of their own life but there are always things they take with them that were a result of narcissist abuse.

The relationship between a narcissist and a victim with anxiety may be looked at as cause and effect. But anyone who can overcome both the demons within themselves and a toxic relationship is stronger than any person I know.

By making you compete with others, your abuser conditions you to seek their approval. No matter what you do, you will never be good enough for them. 6. You think they love you, but they still abuse you Does your partner shower you with love, admiration, and attention all the… Read More »7 Signs Someone Is Manipulating You (And You Don’t Even Realize It)