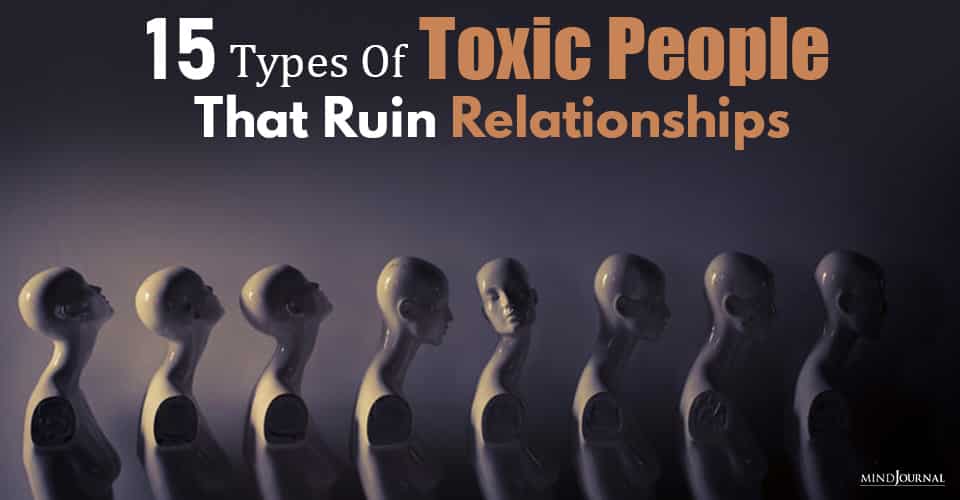 When it comes to being with someone, always avoid a few toxic people because they always ruin relationships, with their manipulative and abusive behavior.

“When people show you over and over that they aren’t capable of loving you the way you want to be loved, believe them.”

One of the joys of being human is that we don’t have to be perfect to be one of the good ones. At some point, we’ll all make stupid decisions, hurt the people we love, say things that are hard to take back, and push too hard to get our way. None of that makes us toxic. It makes us human. We mess things up, we grow and we learn.

Toxic people are different. They never learn. They never self-reflect and they don’t care who they hurt along the way.

Toxic behavior is a habitual way of responding to the world and the people in it. Toxic people are smart but they have the emotional intelligence of a pen lid. It’s no accident that they choose those who are open-hearted, generous, and willing to work hard for a relationship. With two non-toxic people, this is the foundation for something wonderful, but when toxic behavior is involved it’s only a matter of time before that open heart becomes a broken one.

If you’re in any sort of relationship with someone who is toxic, chances are you’ve been bending and flexing for a while to try to make it work. Stop. Just stop. You can only change the things that are open to your influence and toxic people will never be one of them. Here are some of the ones to watch out for.

Here Are 15 Types Of Toxic People That Ruin Relationships

Nobody should have to ask for permission or be heavily directed on what to wear, how to look, who to spend time with, or how to spend their money. There’s nothing wrong with being open to the influence of the people around you, but ‘the way you do you’ is for you to decide.

Your mind is strong and beautiful and shouldn’t be caged. Healthy relationships support independent thought. They don’t crush it.

Related: 10 Types of Toxic People You Should Avoid At All Costs

We all have a limited amount of resources (emotional energy, time) to share between our relationships. Every time you say ‘yes’ to someone who doesn’t deserve you, you’re saying ‘no’ to someone who does. Give your energy to the people who deserve it and when you’re drawing up the list of deserving ones, make sure your own name is at the top.

These people won’t return texts or phone calls and will only be available when it suits them, usually when they want something. You might find yourself wondering whether they got your message, whether they’re okay, or whether you’ve done something to upset them.

No relationship should involve this much guess-work.

Manipulators will steal your joy as though you made it especially for them. They’ll tell half-truths or straight-out lies and when they have enough people squabbling, they’ll be the savior. ‘Don’t worry. I’m here for you.’ Ugh. They’ll listen, they’ll comfort, and they’ll tell you to want you to need to hear. And then they’ll ruin you.

They’ll change the facts of a situation, take things out of context and use your words against you. They’ll calmly poke you until you crack, then they’ll poke you for cracking. They’ll ‘accidentally’ spill secrets or they’ll hint that there are secrets there to spill, whether there are or not. There’s just no reasoning with a manipulator, so forget trying to explain yourself. The argument will run in circles and there will be no resolution. It’s a black hole. Don’t get sucked in.

You: I feel like you’re not listening to me.
Them: Are you calling me a bad listener?
You: No, I’m just saying that you’ve taken what I said the wrong way.
Them: Oh. So now you’re saying I’m stupid. I can’t believe you’re doing this to me. Everyone told me to be careful of you.