13 Things I Want To Tell The Single And Unhappy Ones 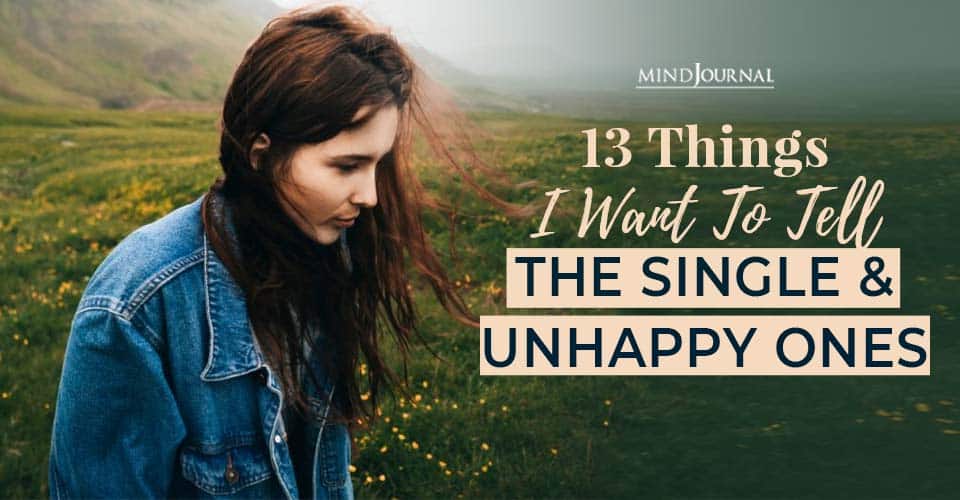 Are you single and unhappy? When did being single become some sort of disease that everyone wants to get rid of? Why does everyone think that being in a relationship or married is superior to being alone? Those are some questions you might want to think about. It’s all about how you look at it.

So if you’re single and unhappy, here are 13 things I want to tell you to cheer you up:

1. Things can change. And they will.

I don’t care if you’ve been single and unhappy for several decades or several days. It can be easy to get down on yourself over the “odds” finding that perfect partner.

Don’t let yourself buy into the ridiculous myths like “It’s more likely to get abducted by an alien than it is to get married after 40.” Remember, anything and everything is possible. You just need to get out of your own way and start believing that.

2. Have high standards. Don’t just date someone because you don’t want to be alone.

You should! You should love being alone because you’re such a cool person. You need to have the mindset that anyone who doesn’t want you is a fool and you wouldn’t want them anyway.

Read 5 Reasons To Choose Being Single, Than Being In a Bad Relationship.

3. Use this time to learn about yourself.

Often, people use being with others as an escape—an escape from themselves. If you’re with others, then the focus is on them, not you. But how well do you really know yourself?

Being single is a precious time that can be used to really get to know and love yourself. So spend the time getting to know you. Discover new things. Work on personal growth if you are single and unhappy.

As Maya Angelou says, “When people show you who they are, believe them the first time.” If someone is showing you that they would rather not date you, believe them. Shrug your shoulders and move on. It’s their loss, not yours. No, really—it is.

5. Work on making yourself the kind of person you would want to date.

Jerry McGuire had it wrong. Don’t look for someone to “complete you.” If you need someone to complete you, then you aren’t whole to begin with. Re-read #2 and #3 as often as you need to in order to get that lesson.

You want someone to think “Wow! This person is dating ME?!?! I’m the luckiest guy/girl on the planet!” And the right person will.

6. Learn to love your own company.

You’re awesome! You’re cool! If you don’t believe me, then you are wrong. Everyone is perfect in their own way. The problem is, many people—especially single people—don’t believe it. It’s okay to spend a Saturday night alone with yourself and a movie and a glass of wine.

As you do, you should say to yourself what my mother always says, “I wonder what the peasants are doing?” In other words, the “peasants” are anyone who’s not you—because you’re having such a good time by yourself that you don’t need anyone else.

7. There are still good people out there.

So you just need to get out of your own head and stop believing those lies that society tells you. There are plenty of good eligible singles out there for you to match up with.